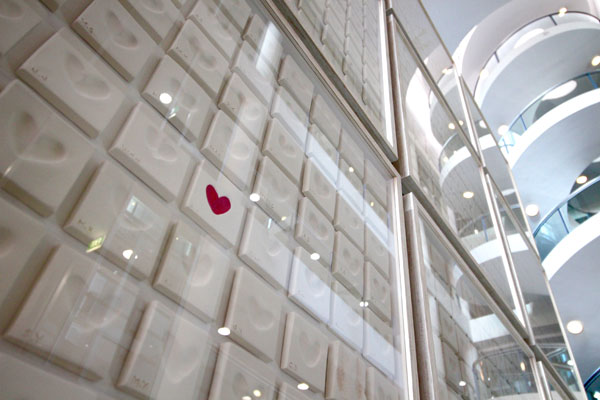 ‘Connie’s Heart’ was a labour of love for Marie Ramos, who took a year off from her work as a family photographer to create the artwork. It contains 2,000 small ceramic tiles, each with a heart-shaped pair of thumbprints from one person, many of whom have been directly affected by cancer. At its centre are the thumbprints of the late Connie Johnson OAM, who passed away from cancer in September this year, which together form the sole red heart in a surrounding sea of white.

In making ‘Connie’s Heart’, Marie raised $110,000 for the Love Your Sister Foundation, which has raised millions of dollars to support Garvan’s cancer research.

At the unveiling, actor Samuel Johnson – who founded Love Your Sister with Connie, his sister – paid tribute to Marie.

Samuel also spoke about the importance of the artwork to his sister Connie, the close relationship that developed between Connie and Marie in the final months of Connie’s life, and Connie’s faith that the artwork would eventually be completed.

Special guests at the event included Danielle and Richard Munro, the parents of 7-year-old Millar, who tragically lost his life to brain cancer in August. Danielle and Richard worked closely with Marie to encourage Australians to contribute a ceramic heart to ‘Connie’s Heart’. At the event, Richard spoke about Millar and their family’s loss, and Danielle unveiled ‘Connie’s Heart’ alongside Samuel.

A/Prof Lim also paid tribute to Marie and to all those who contributed their thumbprints to ‘Connie’s Heart’, and in doing so contributed financial support to cancer research.

“The government research funding is lagging behind the pace of science and increasingly it is the generosity of people like you who have kept Australia on the international stage of scientific breakthroughs,” A/Prof Lim said.

Speaking at the event, Marie said, “Connie’s love of life, her determination to find a cure for cancer with her brother Sam and their beautiful bond touched the hearts of all Australians, including mine, which is why I embarked on this journey to create an artwork that reflects this.

“The community support has been amazing; even school children have been inspired to get involved, including Abbotsleigh primary student Lucy Breden who held her own heart station at school raising over $4,000 last month,” she said.

Andrew Giles, CEO of the Garvan Research Foundation said, “It’s a privilege for Garvan to be the home of ‘Connie’s Heart’. Connie and Love Your Sister have provided catalytic support to Garvan’s cancer research since 2012, and Connie particularly has been a constant inspiration to us all.”

‘Connie’s Heart’ will be on permanent display at Garvan's Darlinghurst premises.