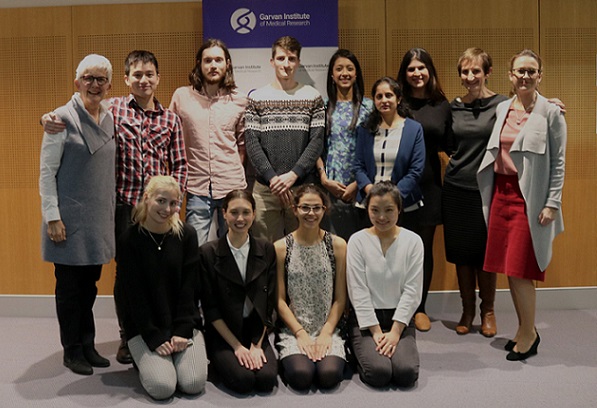 Speaking for three minutes may not sound like much – but summarising a complex research project in just three minutes is certainly no small feat.

The event was held in front of a captured audience of both non-specialists and fellow researchers, in the Garvan Institute Auditorium.

Sarah Alexandrou, a PhD student in the Replication and Genome Stability Group at Garvan won both the first prize ($1000) and the People’s Choice award ($500). In her talk titled ‘The Road to Resistance’, Sarah described her work investigating how resistant breast cancer cells disobey the 'road rules'.

The second prize ($750) went to Oliver Skinner, a PhD student Garvan’s Bone Therapeutics laboratory.  Oliver is investigating the inflammatory response in the disorder mevalonate kinase deficiency (MKD), which he described in his 3MT presentation titled ‘Cooling the porridge’.

Third prize ($500) was awarded to Anushi Shah, a PhD student from the Computational Genomics Group at the Victor Chang Cardiac Research Institute. Through her thesis, Anushi is investigating new ways to analyse the 3 billion nucleotides found in the human genome, ultimately aiming to pinpoint the variants that drive disease.

The 3MT Competition is a nationwide competition where postgraduate research students are asked to describe their research in language appropriate to an intelligent but non‐specialist audience in just three minutes. Presenters are permitted one presentation aid – a static PowerPoint slide.

The event is run in stages, first within universities, and then between universities, with the winners of the intra-faculty stage progressing towards the finals. The finalists from the St Vincent’s Precinct competition will be able to compete in the UNSW Faculty of Medicine 3MT competition.

We congratulate all the participants on their outstanding presentations and wish the finalists well in the competitions to come.