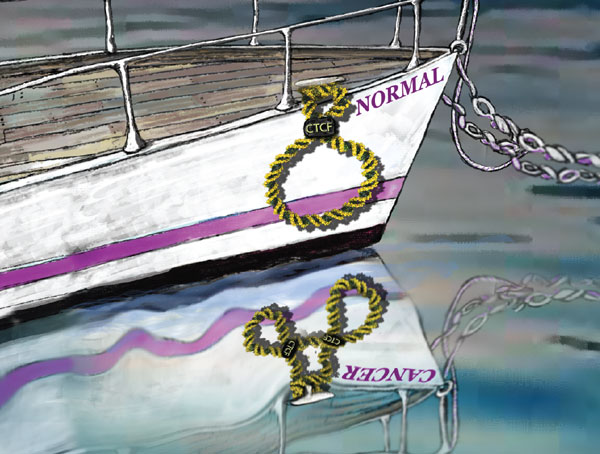 The 3D structural organisation of the genome is altered in cancer cells. Image by Kate Patterson (Garvan Institute of Medical Research)

Line up the genome of a cancer cell and a normal cell, and it is clear that the differences are legion. From point mutations to deletions, large-scale rearrangements and epigenetic alterations (changes to the chemical ‘decoration’ of DNA and its associated proteins), it is well understood that the genomes of cancer cells contain many changes, and that these drive cancer progression.

What is less clear is how this happens. Indeed, we understand little about how changes in the cancer genome and epigenome relate to which genes are switched on and off in cancer.

Now, researchers from the Garvan Institute of Medical Research have shown, for the first time, that in cancer the three-dimensional (3D) structural organisation of the genome is altered. The team, from Garvan’s Genomics and Epigenetics Division, looked in detail at how the genome’s structural organisation differs between cancerous and normal cells – and how this, in turn, influences epigenetic-related changes in gene expression that can drive cancer. Their study has just been published in the leading journal Genome Research.

To understand genome organisation in cancer, the researchers used a state-of-the-art technique called Hi-C (chromatin conformation capture with high-throughput sequencing). Hi-C looks at the strength of interactions between pairs of DNA sequences from across the genome, making it possible to build up a detailed picture of how DNA is arranged in 3D. They compared the genomes and epigenomes of normal cells from the prostate with two different prostate-derived cancer cell lines.

For the researchers, one surprise was the high level of organisation of the cancer genome.

“Because there are so many DNA alterations in cancer, we might have expected the cancer genome to be relatively disorganised,” says Professor Susan Clark FAA, who heads Garvan’s Genomics and Epigenetics Division and led the study.

“Instead, we have shown that the genomes in these cancer cells have clearly defined domains (stretches of DNA that assemble together into a 3D structure), just as a non-cancerous genome does. However, the big change is that the cancer genomes have smaller domains, and more of them.

“We have shown that, in many cases, the smaller domains are formed when there is a cancer-associated insertion or deletion in an area that would usually sit within a domain – effectively splitting the domain into two smaller ones. In one surprising example, we showed that when the TP53 gene locus is deleted (as is common in prostate cancer), a new domain boundary is formed, and two smaller domains result in the cancer cell that leads to long range gene expression alterations within the new flanking domains.”

Drs Phillippa Taberlay and Joanna Achinger-Kawecka, co-first authors in this study, went on to look, within each domain, at ‘differential interactions’ – changes in which sequences of DNA in the domain interact with each other – in normal and cancer cells. They found evidence of large-scale reorganisation within cancer genome domains, with over 2000 cancer-specific ‘differential interactions’ detected in each of the cancer cell lines studied.

To gain insight into how these differential interactions might form, the researchers, in collaboration with Dr Sean O’Donoghue and his group, developed and used a novel visualisation tool (Rondo). They showed that, in areas of the genome where large-scale epigenetic changes occur in cancer, there was a change in the pattern of differential interactions.

“What we are seeing,” Prof Clark points out, “is that the 3D structural changes to the genome are having the effect of bringing some genes in cancer cells into contact with new regulatory sequences that they would remain distant from in normal cells – and, as a result, the expression of those genes is now abnormally increased in cancer cells.

“Taken together, the results of the study point to massive structural alterations in cancer cells – from genetic and epigenetic changes, to large-scale structural rearrangements of the genome, ultimately resulting in changes in gene expression that can drive the progression of cancer.

“We have never before been able to look at these interactions with such clarity. It’s exciting to be able to link 3D structural organisation with definitive genetic and epigenetic changes – and it’s going to provide us with considerable insight into how cancer progresses at a cellular level.”