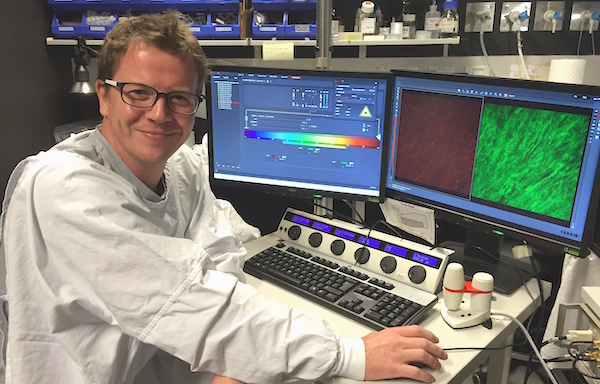 Scientists from Australia and the UK have created a “biosensor mouse”, enabling them to watch as pancreatic cancer cells begin to “unzip” from each other in real time – a signal that cells are on the verge of spreading from the primary tumour. Remarkably, the researchers successfully rezipped these cancer cells by treating mice with anti-cancer therapies, stopping the spread of cancer before it had begun.

Pancreatic cancer is a killer. Currently, five-year survival rates after diagnosis stand at just 6.1% – a figure that has barely changed in the last 40 years. This means that, of the 2,500 Australians diagnosed with pancreatic cancer every year, almost all will die within five years.

“Many patients present with pancreatic cancer at a very advanced stage, when the cancer has already spread to other tissues such as the liver,” says Dr Paul Timpson, of Sydney’s Garvan Institute of Medical Research, who co-led the study with Professor Kurt Anderson of the Beatson Institute for Cancer Research, UK.

“But sometimes, the cancer is detected before it has spread – and that’s the point where we have an opportunity to intervene and stop the spread of cancer in its tracks.”

“Our biosensor mouse makes it possible to look at a primary tumour that has not yet spread: in real time, in 3D and in a living tumour. Using a state-of-the-art laser technology known as FRAP, we can see, at a molecular level, whether the contacts that hold tumour cells in place have started to unzip – and that’s a sign that the cancer is about to spread.

“Crucially, if we see that cells have already begun to unzip, and we give a drug early enough, we can rezip those cells together – before the cancer starts to spread.”

To make the biosensor mouse, the researchers developed a mouse in which a key “zippering” protein that holds cells together – called E-cadherin – was linked to a protein that glows green in fluorescence microscopy. They developed a mouse model in which the zippering protein was labelled green in every tissue, as well as a number of models with “green E-cadherin” in only selected tissues of interest, such as the pancreas.

“The biosensor mouse gives us the ability to study molecular interactions in living tumours,” Prof Anderson says. “Using a laser, we switch off the green fluorescence in a small portion of the junction between two cells – and depending on how much fluorescence comes back we can estimate how tightly the molecular zipper is holding cells together.

To understand how unzipping contributes to tumour spreading in pancreatic cancer, the researchers next used a genetic model of invasive pancreatic cancer in the mouse, and combined that with the biosensor mouse.

“We took some of the most common mutations that are found in aggressive pancreatic cancers in people, and introduced them to the biosensor mouse. In particular, we introduced mutations in both the Kras gene (which is mutated in almost all pancreatic cancers) and the gene encoding p53, which is well known to drive cancer spread.

Dr Timpson says the most exciting part of the study was what came next.

“We treated mice that had developed pancreatic cancer that had yet to spread with the anti-invasive drug dasatinib.  Within three days of treatment, we saw cells within the tumour had rezippered, and we could stabilize the primary tumour.”

Similar results were achieved with a second therapy, saracatinib.

“The biosensor mouse is a powerful tool for anti-cancer drug discovery,” Dr Timpson says. “It makes it possible to evaluate the effect of new therapies on tumour spread, in real time and in a system that reflects human cancer as closely as is currently possible.”

Dr Timpson points out that this is just the beginning for the biosensor mouse.

“We now have a model that is one step ahead of the invasion process in pancreatic cancer – but we are also already using this model in our laboratory for other aggressive and highly invasive cancer types, such as breast cancer.

“Ultimately, we expect to use the biosensor mouse to explore zippering and cancer spread in a wide range of tumours throughout the body.”

The study is published online today in the prestigious journal Cell Reports.