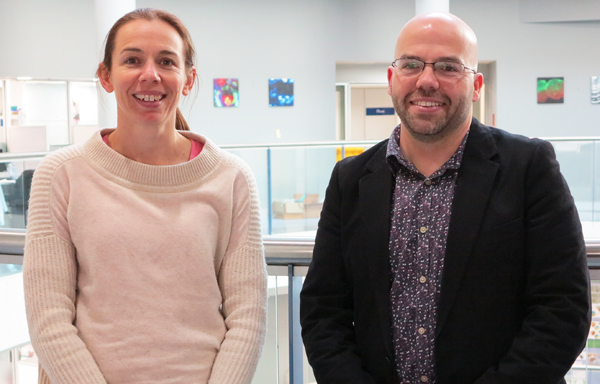 Research by Associate Professor Stuart Tangye and Dr Elissa Deenick, of Sydney’s Garvan Institute of Medical Research, has shed light on why some children are unusually susceptible to infectious disease. Together with Professor Jean-Laurent Casanova (The Rockefeller University, New York) and others, A/Prof Tangye and Dr Deenick identified a new series of disease-associated mutations in a group of children with a very rare form of primary immunodeficiency.

Primary immunodeficiencies are disorders in which a small part of the immune system is unable to do its job. The result is a ‘hole’ in the immune defence of otherwise healthy individuals, making them susceptible to particular infections.

This research centred around seven children from three distinct families (of Palestinian, Chilean and Saudi Arabian ethnicity) who, unusually, were found to have two different forms of primary immunodeficiency. They were susceptible to mycobacterial disease, as well as to fungal infection by the yeast Candida.

Prof Casanova and his group, who led the project, looked for mutations in the DNA of each of the seven children that could account for their unique pattern of immunodeficiency. They did this by using whole-exome sequencing – a state-of-the-art approach in which the DNA sequence of every protein-coding region in a patient’s entire genome is analysed.

“We’ve been collaborating with Prof Casanova’s group for a number of years, on multiple projects,” says A/Prof Tangye. “That group has really been at the forefront, for 20 years now, of identifying gene mutations that provide a molecular explanation for why these kids get sick.  With the advent of whole-exome sequencing and whole-genome sequencing, which the Casanova group has really embraced, their rate of gene discovery in primary immunodeficiencies is becoming much greater.”

The Casanova group showed that each child had a mutation in a gene called RORC. RORC is known to be important in programming immune cells. As Dr Deenick says, “RORC is a transcription factor, so it controls gene expression – in effect, it tells the cell what kind of cell it should be.”  In each patient, both copies of the RORC gene carried the same mutation.

Finding a mutation in RORC in individuals with impaired immunity to mycobacteria came as a surprise to the researchers. In immunodeficiency against mycobacteria, all of the mutations that have been discovered so far affect the production or function of the immune signalling molecule interferon-γ. This research made the link between RORC and the interferon-γ response for the first time.

In the next stage of the research, A/Prof Tangye and Dr Deenick used cell biology approaches to analyse the circulating immune cells of some of these patients. Their results shed light on how the patients’ RORC mutations could lead to the two forms of primary immunodeficiency.

A/Prof Tangye says, “A strength of our group is in cell biology, and working out what the consequences of a gene mutation are on cellular function. In other words, we work out how a mutation in that gene, in that cell, can cause that disease.”

A/Prof Tangye and Dr Deenick compared the immune cell populations of the patients to those of family members who carried only one copy of a mutated RORC gene, as well as to unrelated individuals.

They were able to show that a number of immune cell populations (known as MAIT and NKT cells) were absent in the patients, and that other immune cells (Th17 cells) did not form properly. These three cell types all produce interleukin-17 (IL17), which is important in immunity against fungal infection.

Dr Deenick says, “These multiple populations of IL17-producing cells are absent in these individuals – and that’s probably contributing to the susceptibility to Candida infection.”

“We also show that there’s a defect in interferon-γ production in some cell types which is partially responsible for why the patients are susceptible to mycobacteria,” says Dr Deenick.

The work is published today in the leading journal Science. It was published online ahead of print on July 9.

A/Prof Tangye says the research is an exciting step forward in our understanding of the immune system’s complexity. “Not only has a really important new disease been discovered, but the mechanism is well articulated from a lot of the biology that’s come from work done here and in other labs.”

A/Prof Tangye will be soon be working closely again with Prof Casanova’s group. Later this month, he will relocate temporarily to The Rockefeller University to take up a prestigious Fulbright Senior Scholarship, awarded in February by the Australian American Fulbright Commission.