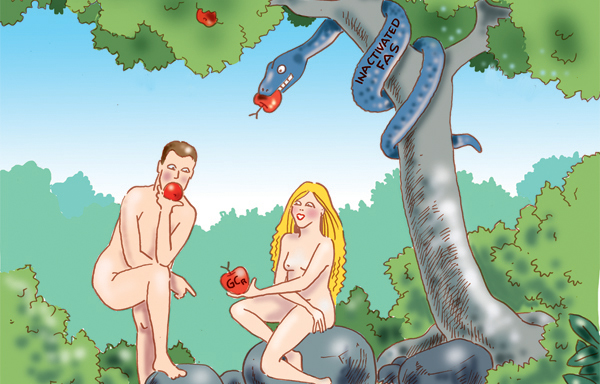 Australian researchers believe they have discovered a group of cells that trigger autoimmune disease, as well as the molecular ‘trigger guard’ that normally holds them in check.

During a normal immune response, B cells that encounter foreign ‘antigen’ (such as a virus or bacteria) migrate to germinal centres, transient microstructures that form in lymph nodes and tonsils. Once inside, B cells mutate their antibody genes randomly until they produce an antibody with high affinity to the invader.

At that point, successful B cells transform into small antibody factories known as ‘plasma cells’, which multiply and flood the system with new antibodies.

Unfortunately, the urgency and speed at which B cells mutate, as well as the random nature of the process, sometimes creates B cells with high affinity ‘autoantibodies’ that happen to match ‘self’. Such cells must be inactivated in order to avoid autoimmune disease.

The process by which autoantibody-producing B cells are prevented from developing in the germinal centre remains unknown. The FAS molecule, a ‘death receptor’ present at high levels on these cells, has been a prime suspect in their control.

FAS mutations were found to enable the development of a subclass of ‘rogue germinal centre B cells’, with antibody genes that in no way recognise foreign antigen. These rogue cells produce large numbers of plasma cells that in turn produce unexpected and damaging antibodies, including autoantibodies. The findings are published in the prestigious journal Immunity today.

“In very simple terms, we believe FAS prevents rogue germinal centre B cells from developing, and we suspect that is its primary role,” said Professor Brink.

“When we removed FAS from a mouse model, we saw the appearance of rogue cells in the germinal centre, and the plasma cells they produced, and neither obeyed any of the normal rules.

“A disproportionately large number of plasma cells were formed by these rogue cells, producing antibodies you wouldn’t expect to see, very high numbers of IgE antibodies in particular.

“Instead of getting better at binding foreign antigen, rogue cells got worse – the opposite of what is supposed to happen in the germinal centre!

“Most significantly, many of the antibodies derived from rogue cells turned out to be autoantibodies.”

Patients with a mutation in FAS develop an autoimmune disease known as Autoimmune Lymphoproliferative Syndrome (ALPS) in which the body cannot control the number of immune cells (lymphocytes). This results in enlargement of the lymph nodes, liver and spleen.

Through collaborators at the National Institutes of Health in the US, Brink and colleagues gained access to a database containing disease information from the largest cohort of ALPS patients in the world. They found that over 25% of ALPS patients have abnormally high levels of IgE in the blood.

Professor Brink believes that the patient data provides “provocative evidence” that his group’s findings about FAS and rogue germinal centre B cells in mice also apply to humans.

“High levels of IgE antibodies are being found in other autoimmune diseases, such as lupus, and IgE is becoming increasingly associated with severe disease,” he said.

“The fact that these rogue cells produce both autoantibodies and IgE antibodies, provides a compelling association with the more severe forms of autoimmunity.

“We do not yet know how rogue B cells arise – mutation of FAS is certainly one way, but there are likely to be others. Defining these mechanisms promises to advance our understanding of the genesis of autoimmune disease and will point the way towards new diagnosis and treatment strategies."