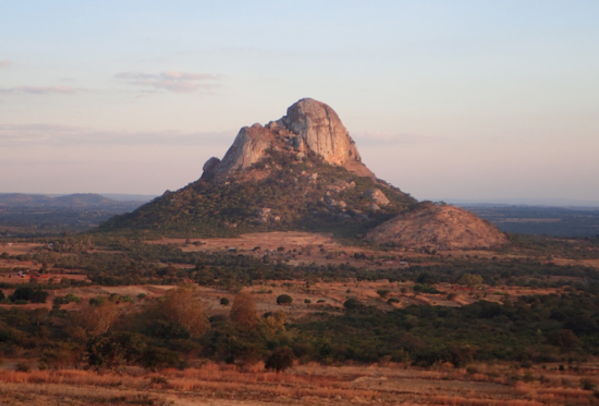 Mount Hora in Malawi, where the oldest DNA in the study, from a woman who lived more than 8000 years ago, was obtained. Image: Jessica C. Thompson/Emory University

This media release was modified from an article by Stephanie Dutchen, Harvard Medical School Office of Communications and External Relations.

The findings, published today in Cell by an international research team led by Harvard Medical School, and including Vanessa Hayes (Lab Head, Genomics and Epigenetics Division, Garvan Institute of Medical Research; University of Sydney; University of Pretoria), answer several longstanding mysteries and uncover surprising details about sub-Saharan African ancestry—including genetic adaptations for a hunter-gatherer lifestyle and the first glimpses of population distribution before farmers and animal herders swept across the continent about 3000 years ago.

Altogether, the team coaxed DNA from the skeletal remains of 15 sub-Saharan African individuals who came from a variety of geographical regions and lived up to 8500 years ago.

Hayes contributed genomic information from one of these individuals – a male in his 50s who lived about 2000 years ago, found at St Helena Bay at the southern tip of Africa. The man, who stood no more than 1.5m high, was a marine hunter-gatherer and had a case of what we now know as ‘surfer’s ear’ – indicating that he spent much of his time diving in the cold sea for food.

Hayes is a world-renowned expert in the genomics of both contemporary and ancient Africans. In 2010, she and her team determined the first genomes from modern-day Africans (Archbishop Desmond Tutu and !Gubi, a Kalahari bushman from Namibia). Then, in 2014, she published the complete mitochondrial genome of the St Helena hunter-gatherer who also features in the new research.

The research team compared the 15 ancient genomes—along with the only other known ancient genome from the region, previously published in 2015—against those of nearly 600 present-day people from 59 African populations and 300 people from 142 non-African groups.

For Hayes, the research is an important progression in our understanding of the complexity of African prehistory. She says, “We think of Africa as the cradle of civilisation – but it’s easy to forget that there was an immense amount of population movement across the continent, long before we humans left Africa. This study shines a light on those movements and deepens our understanding.”

The power of ancient DNA

“The last few thousand years were an incredibly rich and formative period that is key to understanding how populations in Africa got to where they are today,” said David Reich, professor of genetics at HMS and a senior associate member of the Broad Institute of Harvard and MIT. “Ancestry during this time period is such an unexplored landscape that everything we learned was new.”

“Ancient DNA is the only tool we have for characterizing past genomic diversity. It teaches us things we don’t know about history from archaeology and linguistics and can help us better understand present-day populations,” said Pontus Skoglund, a postdoctoral researcher in the Reich lab and the study’s first author. “We need to ensure we use it for the benefit of all populations around the world, perhaps especially Africa, which contains the greatest human genetic diversity in the world but has been underserved [by the genomics community].”

Although ancient-DNA research has revealed insights into the population histories of many areas of the world, delving into the deep ancestry of African groups wasn’t possible until recently because genetic material degrades too rapidly in warm, humid climates.

Technological advances—including the discovery by Pinhasi and colleagues that DNA persists longer in small, dense ear bones—are now beginning to break the climate barrier. Last year, Reich and colleagues used the new techniques to generate the first genome-wide data from the earliest farmers in the Near East, who lived between 8,000 and 12,000 years ago.

Hayes says the ability to extract information from across the genome of ancient Africans is a game-changing advance.

“Back in 2010, when we were first given access to the St Helena skeleton, DNA had never been successfully extracted from remains in the region due to the heat and the acidic soil. To have been lucky enough to work with Svante Paabo (Max Planck Institute of Evolutionary Anthropology, Leipzig) back then to extract DNA from the skeleton successfully, and now to be working with experts from across the world to look at this individual’s genome alongside that of 14 others… it’s a remarkable step forward, and a powerful tool for understanding how prehistoric populations were structured.”

Almost half of the team’s samples came from Malawi, providing a series of genomic snapshots from the same location across thousands of years.

The time-series divulged the existence of an ancient hunter-gatherer population the researchers hadn’t expected.

When agriculture spread in Europe and East Asia, farmers and animal herders expanded into new areas and mixed with the hunter-gatherers who lived there. Present-day populations thus inherited DNA from both groups.

The new study found evidence for similar movement and mixing in other parts of Africa, but after farmers reached Malawi, hunter-gatherers seem to have disappeared without contributing any detectable ancestry to the people who live there today.

“It looks like there was a complete population replacement,” said Reich. “We haven’t seen clear evidence for an event like this anywhere else.”

The Malawi snapshots also identified a population that spanned from the southern tip of Africa all the way to the equator about 1400 years ago before fading away. That mysterious group shared ancestry with today’s Khoe-San people in southern Africa and left a few DNA traces in people from a group of islands thousands of miles away off the coast of Tanzania.

“It’s amazing to see these populations in the DNA that don’t exist anymore,” said Reich. “It’s clear that gathering additional DNA samples will teach us much more.”

“The Khoe-San are such a genetically distinctive people, it was a surprise to find a closely related ancestor so far north just a couple of thousand years ago,” Reich added.

The new study also found that West Africans can trace their lineage back to a human ancestor who may have split off from other African populations even earlier than the Khoe-San.

The research similarly shed light on the origins of another unique group, the Hadza people of East Africa.

“They have a distinct appearance, language and genetics, and some people speculated that, like the Khoe-San, they might represent a very early diverging group from other African populations,” said Reich. “Our study shows that instead, they’re somehow in the middle of everything.”

The Hadza, according to genomic comparisons, are more closely related to non-Africans than other Africans today. The researchers hypothesize that the Hadza are direct descendants of the group that migrated out of Africa, and possibly spread within Africa as well, after around 50,000 years ago.

Another discovery lay in wait in East Africa.

Scientists had predicted the existence of an ancient population based on the observation that present-day people in southern Africa share ancestry with people in the Near East. The 3,000-year-old remains of a young girl in Tanzania provided the missing evidence.

Reich and colleagues suspect the girl belonged to a herding population that contributed significant ancestry to present-day people from Ethiopia and Somalia down to South Africa. The ancient population was about one-third Eurasian, and the researchers were able to further pinpoint that ancestry to the Levant region.

“With this sample in hand, we can now say more about who these people were,” said Skoglund.

The finding put one mystery to rest while raising another: Present-day people in the Horn of Africa have additional Near Eastern ancestry that can’t be explained by the group to which the young girl belonged.

It required “squeezing water out of a stone” because they were working with so few ancient samples, said Reich, but Skoglund was able to identify two regions of the genome that appear to have undergone natural selection in southern Africans.

The researchers hope the study encourages more researchers to investigate the diverse genetic landscape of human populations in Africa, both past and present. Reich also said he hopes the work reminds people that African history didn’t end 50,000 years ago when groups of humans began migrating into the Near East and beyond.

“The late Stone Age in Africa is like a black hole, research-wise,” said Reich. “Ancient DNA can address that gap.”

There were 44 total study authors from institutions in 11 countries.