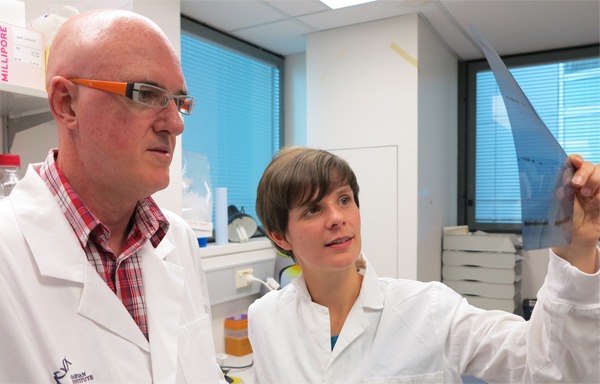 Diabetes arises from the collapse of a delicately balanced whole-body system that keeps blood sugar levels stable and low in healthy people.

When we eat, our pancreas releases just the right amount of insulin to help our muscles use the sugar released into our bloodstream. The liver stores some of that sugar, releasing it later when we need it.

Australian scientists believe they have identified an enzyme that undermines this system by causing dysfunction in the three major diabetes players: the pancreas, the liver and muscle.

Known as ‘NIK kinase’, the enzyme activates a signaling pathway that affects many genes, switching some on and others off.

Associate Professor Shane T. Grey and Dr Elizabeth Malle, from Sydney’s Garvan Institute of Medical Research, fed mice a diet containing 45% fat, comparable to the proportion of fat in many Western diets, to measure the impact on the pancreatic ‘beta cells’, which produce insulin.

After a few months of high-fat feeding, Grey and Malle analysed beta cells from the mice and found high levels of NIK and high expression of the genes in the NIK-enabled pathway.

The researchers demonstrated the dysfunction of pancreatic insulin-producing cells brought about by NIK activation in a variety of models - human cells, mice and zebra fish. In all cases, insulin production became dysregulated, often halved.

The results are published online today in the Journal of Experimental Medicine.

“We believe we have stumbled upon a very significant enzyme in the story of diabetes,” said Associate Professor Grey.

“One thing truly amazed us – many of the diabetes genes, picked up by GWAS studies that included thousands of people, were the same as the dysregulated genes in pancreatic islets. That was exciting!

“We don’t yet know how it all connects, but we can say that this is a signaling pathway that controls gene expression in fish and in mice whose insulin production and uptake is compromised – and that these are the same genes that have already been picked up by human genetic studies of diabetes.”

A/Prof Grey noted that an article was published in Nature Medicine in 2012, showing that obesity led to the activation of NIK in the liver, as well as the activation of the NIK-enabled pathway. The resulting symptoms included hyperglycemia and glucose intolerance.

Grey also referred to a study published in Endocrinology which showed that biopsies of muscle, taken from people with metabolic syndrome before and after bariatric surgery to reduce their obesity, showed significant reduction of NIK protein in skeletal muscle after weight loss.

“All the research on the NIK enzyme is pointing to the fact that when it is active it drives the well-known symptoms of diabetes,” he said.

“Our next step is to prove that NIK is a drug worthy target. We are working with a California-based biotech company to do that, and are hoping to have results by the end of this year.

“We now know that obesity turns NIK on in pancreatic beta cells, in liver and in muscle – and we now think that NIK is responsible for the damage in those organs when diabetes is developing.

“We are now looking for a safe way to block NIK, and perhaps prevent the onset of diabetes.”