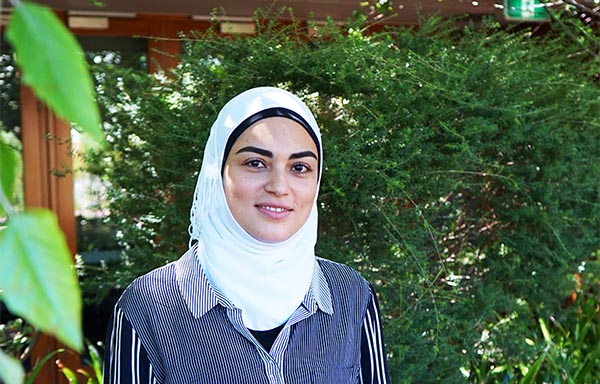 Congratulations to Garvan Institute of Medical Research PhD student Dr Dunia Alarkawi, who has been presented with a prestigious Australia Day Award from the National Council of Women of NSW.

The National Council of Women of NSW, founded over 120 years ago, works to promote equal status of women in society and in the law. Their Australia Day Awards aim to encourage women to undertake further studies, acknowledging those who have made significant contributions to their field.

Dr Alarkawi’s award recognises her exceptional achievements so far in her medical research career, in particular the amount she has accomplished in less than two years of PhD research, despite challenges she has faced.

Dr Alarkawi’s research involves analysing vast datasets from thousands of osteoporosis patients. Her work is part of a multinational project that examines datasets from different countries to investigate associations between bone fractures, osteoporosis treatment, and mortality.

Within months of beginning her PhD research, in Garvan’s Bone Biology Division, Dr Alarkawi had a new baby, and due to her husband’s work commitments, the three of them departed Australia for 18 months, travelling to Canada and the UK. 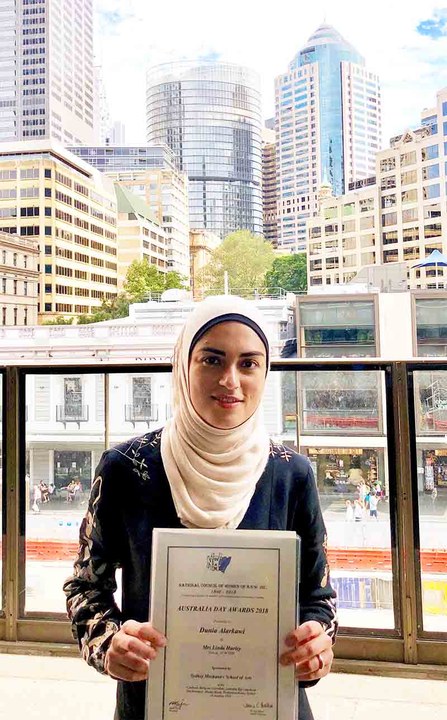 Determined not to let these changes interrupt her progress, during her time in Canada Dr Alarkawi started to organise data from a new dataset and began to perform statistical analysis. She kept in contact with her supervisors at Garvan, Professor Jacqueline Center and Dr Dana Bliuc.

In the UK, with the aid of Prof Center, Dr Alarkawi formed a relationship with a research group at Oxford University. This collaboration led to important findings linking osteoporosis drugs, called bisphosphonates, to reduced mortality in patients with chronic kidney disease. The findings were presented at the 2017 American Society for Bone and Mineral Research meeting.

Now returned to Garvan to continue her studies, Dr Alarkawi is preparing to submit her latest findings for publication and plans to submit her PhD thesis to UNSW Sydney in 2020.

Prof Center says, “Dunia is a very talented scientist, with an incredible work ethic. Remarkably, in foreign countries with a young child and no family support, she managed to start organising her data and perform analyses on datasets that will form the backbone of her PhD thesis.”

High achievements and overcoming challenges are not new to Dr Alarkawi. Of Syrian parents, Dr Alarkawi was born and raised in the United Arab Emirates, where she studied medicine at Gulf Medical University. She graduated in 2010 with the University Medal in recognition of being ranked first in the final examination, and was named ‘Best Outgoing Student.’

She then migrated to Australia, saying, “Moving to Australia was at once the most amazing opportunity and the biggest challenge of my life.”

Before joining Garvan, Dr Alarkawi completed the Australian Medical Council exams, and achieved a Distinction upon completing a double Masters of Public Health and Health Management at UNSW.

Dr Alarkawi’s PhD research is supported by a Public Health Postgraduate Scholarship from the National Health and Medical Research Council.

“I am so grateful to Australia and to Garvan for everything they have given me. I am very lucky to be working with my supervisors and a fantastic team of researchers - pioneers in osteoporosis research.”

“Moving to Australia was at once the most amazing opportunity and the biggest challenge of my life.”

Recognition by National Council of Women of NSW

Dr Alarkawi’s award was generously sponsored by the Sydney Mechanics School of Arts, and was presented to her by Mrs Linda Hurley, patron of the National Council of Women of NSW, at NSW Parliament House on Wednesday, 24 January. Of all the Australia Day Award recipients, Dr Dunia Alarkawi was named 'Most Distinguished.'

“I am honoured to be among the award recipients, and very grateful to the National Council of Women of NSW, and to the generosity of the Sydney Mechanics School of Arts,” says Dr Alarkawi.

Prof Center and Dr Bliuc were proud to attend the awards event, and say that the award is truly deserved.

“I am delighted for Dunia, and that her achievements have been recognised with this award. She has accomplished an amazing amount over the last few years and she has an extremely bright future ahead of her in medical research,” says Prof Center.

"Dunia has an extremely bright future ahead of her in medical research.”

Garvan researchers have been recognised by previous Australia Day Awards from the National Council of Women of NSW, including: