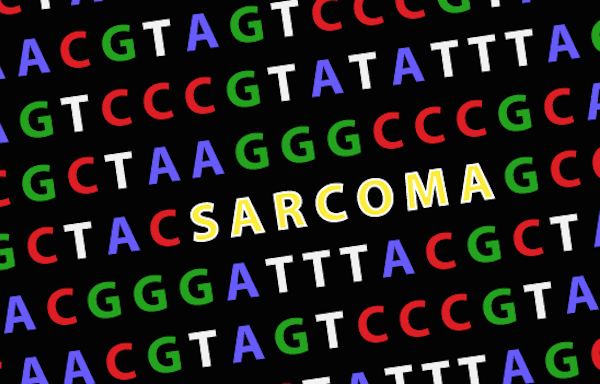 Cancer is a disease of our genes – yet our understanding of how our genetic makeup affects our risk of cancer is still rudimentary.

Now, that’s set to change, following pioneering work by Australian researchers to understand the genetics of risk in the bone and soft-tissue cancer, sarcoma. In a landmark study of over 1000 sarcoma patients, the researchers uncovered numerous new genetic risk factors for the cancer – and, in a world first for any cancer type, they showed that carrying two or more of these rare mutations increases an individual’s cancer risk.

Sarcomas are cancers of connective tissues that disproportionately affect the young. They are one of the three leading causes of disease-related death among children and young adults in Australia, and sarcoma survivors are at higher risk of developing a second cancer.

The new findings relating to cancer risk were uncovered through the International Sarcoma Kindred Study (ISKS), an Australian-led international consortium that is exploring the genetic basis of sarcoma in over 1000 individuals – the largest study ever conducted in this disease. The research is published today in the leading journal The Lancet Oncology.

The ISKS team used a ‘gene panel’ of 72 genes to detect mutations in each study participant. They identified mutations in a number of new genes that significantly increase the risk of developing sarcoma, including in the genes ERCC2, ATR, BRCA2 and ATM.

Importantly, in individuals carrying mutations in two genes, the risk of developing sarcoma was measurably higher than in those with a mutation in only one gene. And in carriers of three or more mutations, the risk was greater still.

“This is the first time – in any cancer – that anyone has quantified the effect of multiple rare genetic mutations on cancer risk,” says Professor David Thomas (Head of The Kinghorn Cancer Centre and the Cancer Division of the Garvan Institute of Medical Research), who led the study.

“Until now, we’ve been limited to single-gene thinking, so we tell patients, for instance, that carrying a BRCA1 mutation means their breast cancer risk is higher, or that their risk of sarcoma and other cancers is higher if they’ve got a particular mutation in the p53 gene.

“The study shows us that the landscape of cancer risk is far more complex than that. We can now see that the risk for developing sarcoma is increased through the combined effect of multiple genes, and that the more mutations someone carries, the earlier the onset of cancer.

“These previously invisible effects are at least as large as the impact of mutations in the p53 gene itself, which is currently the strongest known genetic cause of sarcoma.”

Dr Mandy Ballinger (Garvan), who co-ordinates the ISKS globally, says the study will radically change how sarcoma risk is understood.

“It’s well accepted for a few cancers – like breast cancer and bowel cancer – that cancer risk is substantially determined by the genes we inherit from our parents. Our study brings sarcoma into that select group.

“About half the study participants carried at least one of these apparently cancer-promoting mutations, and almost a quarter carried more than one, which really underscores that sarcoma risk is inherited to a large extent from one’s parents.”

“We’ve never been able to identify these at-risk individuals, and their families, before. Now we can,” adds Prof Thomas. “That means we can manage risk better, and help those people to get the care they need, when they need it.”

Prof Thomas says the study’s findings are an important step towards personalised medicine for cancer.

“Understanding the genetic drivers that give a person an increased risk of cancer also helps us understand how best to treat that person’s cancer. And for about a third of the individuals we studied, the gene mutations they carry give us important information about how regularly they should be monitored and how they should or should not be treated.

“To give one example, the ERCC2 gene is involved in detoxifying chemotherapeutic agents – so that could impact on treatment choices for those individuals who carry an ERCC2 mutation.

“And for individuals carrying a BRCA2 mutation, we now know that they are at risk of sarcoma as well as breast and ovarian cancer – which also brings into play new treatment approaches.”

“A lot of what we’re doing going forward is looking at how we use genetic information about risk to alter the way we treat people. The more we know, the more precisely we can match individuals with the best possible treatment for them.”

The researchers say that an important new direction for the research will be to investigate the entire genome for genetic mutations that increase sarcoma risk.

“We have only scratched the surface of cancer’s genetic underpinnings,” says Dr Ballinger.

“Ultimately, we want to identify the entire set of genetic mutations that affect the risk of developing this devastating cancer.”

Whole-genome studies of sarcoma risk will be aided by the NSW Cancer Genomic Medicine Program announced last year by the NSW Government, as part of the Sydney Genomics Collaborative program.