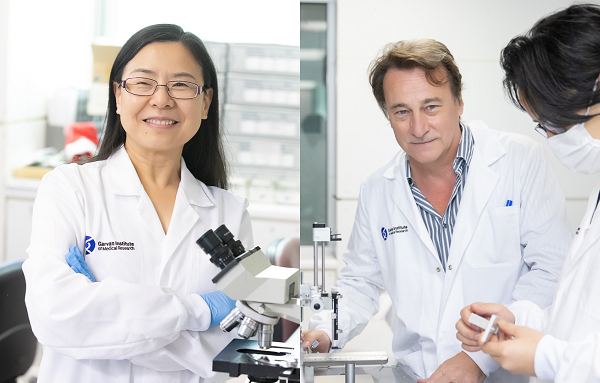 A receptor that helps conserve energy when food is scarce may be the key to a safer approach to treating diet-induced obesity, research led by the Garvan Institute of Medical Research has revealed.

In a study using experimental models and fat tissue biopsies from obese individuals, the team revealed that blocking a specific receptor of the molecule neuropeptide Y (NPY), which helps our body regulate its heat production, could increase fat metabolism and prevent weight gain.

“The Y1 receptor acts as a ‘brake’ for heat generation in the body. In our study, we found that blocking this receptor in fat tissues transformed the ‘energy-storing’ fat into ‘energy-burning’ fat, which switched on heat production and reduced weight gain,” says Dr Yan-Chuan Shi, Leader of the Neuroendocrinology Group at Garvan and co-senior author of the paper published in Nature Communications.

“Most of the current medications used to treat obesity target the brain to suppress appetite and can have severe side effects that limit their use. Our study reveals an alternative approach that targets the fat tissues directly, which may potentially be a safer way to prevent and treat obesity.”

Obesity and overweight are major public health issues, which in Australia are estimated to affect two thirds of all adults. The condition can lead to severe medical complications, including diabetes, cardiovascular disease and some cancers, and while lifestyle changes are essential to weight loss, medication is a crucial adjunct treatment option for some.

The authors of the study investigated Y1 receptors controlled by the molecule NPY, which is released in the body under conditions of starvation to help reduce energy expenditure and increase fat storage. Surprisingly, the team discovered that Y1 receptors were produced at higher levels in the fat tissue of obese individuals.

The team then blocked the Y1 receptor using the experimental treatment BIBO3304 in a mouse model of obesity.

“In our study, we found that mice that were administered BIBO3304 and fed a high-fat diet gained about 40% less body weight over seven weeks than mice on a high-fat diet alone. This significant reduction of body weight gain was caused by an increase in body heat generation and reduction in fat mass,” says Dr Shi.

“Further, when we applied BIBO3304 to human fat cells isolated from obese individuals, we found that the cells began switching on the same genes involved in producing heat as the ones in mice, which suggests that targeting the Y1 receptor pathway may similarly increase fat metabolism and reduce weight gain in humans,” Dr Shi adds.

Targeting obesity at the source

“NPY is a metabolism regulator that plays a critical role during states of low energy supply, where it helps store fat as a survival mechanism. Today however, these advantageous effects can exacerbate existing diet-induced weight gain, leading to obesity and metabolic disease,” says co-senior author Professor Herbert Herzog, Head of the Eating Disorders Lab at Garvan.

The researchers say a crucial component of the study was to demonstrate that the experimental treatment BIBO3304 did not cross the blood brain barrier, and that the anti-obesity effects of blocking the Y1 receptor pathways occurred not via the brain, but specifically only in peripheral tissues.

“Most current prescribed treatments are aimed at reducing food intake by targeting the central nervous system. However, these can have significant psychiatric or cardiovascular side effects, which have resulted in over 80% of these medications being withdrawn from the market,” says Dr Shi.

“Our study is crucial evidence that blocking Y1 receptors in peripheral tissues without affecting the central nervous system is effective at preventing obesity by increasing energy expenditure. It reveals a new therapeutic approach that is potentially safer than current medications that target appetite,” says Professor Herzog.

“Our team and other groups have revealed further potential benefits in targeting the NPY-Y1 receptor system, including the stimulation of bone cell growth, and improvement in cardiovascular function and insulin resistance,” he adds. “We hope that the publication of our findings will lead to increased interest for exploring BIBO3304 and related agents as potential treatments for obesity and other health conditions.”