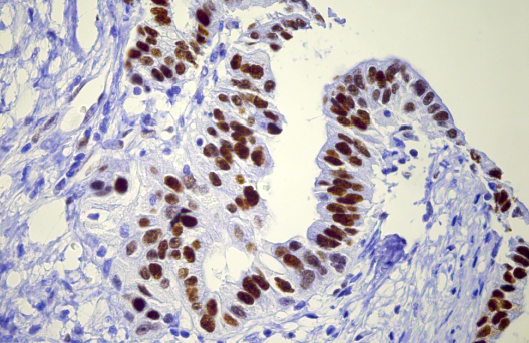 The scientists also found a straightforward way to test which patients might respond positively to treatment, marking a significant step towards personalised medicine for pancreatic cancer.

The findings, which were uncovered in mice and in patient-derived samples, have just been published online in the journal Gut.

Pancreatic cancer is a killer. Currently, five-year survival rates after diagnosis stand at just 7% – a figure that has scarcely improved in the last four decades. Most pancreatic cancers are diagnosed after the tumour has spread beyond the pancreas, making treatment even more challenging.

Dr Marina Pajic, who leads the Personalised Cancer Therapeutics Group at the Garvan Institute of Medical Research (Cancer Division), led the study, and says it was designed to meet an urgent need for new, targeted therapies for pancreatic cancer.

Dr Pajic says, “We are thrilled to have shown, in preclinical models, that the breakthrough breast cancer drug palbociclib targets a major subtype of pancreatic cancer.”

“We know that the underlying drivers of pancreatic cancer at the molecular level differ from person to person.  Despite this, there are currently few treatments that directly target the molecular drivers of an individual’s pancreatic cancer, but only a one-size-fits-all combination chemotherapy approach – and the fact is that this simply isn’t effective for most patients.”

In about two-thirds of those tumours, they found, a cellular pathway known as the “Cdk4/6 pathway” was switched on, driving tumour cells to grow and divide.

“This was an important clue for us,” says Dr Pajic, “and we started to look in depth at how best to block the Cdk4/6 pathway. We know that the drug palbociclib switches off the Cdk4/6 protein, so we reasoned that palbociclib might halt the growth of the many pancreatic cancers where this pathway is “ON”.

Crucially, the researchers showed that the RB protein – another protein in the Cdk4/6 pathway – was present in high levels in Cdk4/6 “ON” tumours and so could act as a ‘biomarker’ of the tumour subtype.

“Having a good biomarker is essential for personalised medicine, because it gives us a way to predict who is likely to respond to treatment,” says Dr Angela Chou (Garvan & St Vincent’s Hospital, Sydney), a pathologist and researcher who is first author on the new study.

“Importantly, we can test RB levels quickly and easily by using standard preparations of biopsy tissue that are a part of the regular workflow in Australian diagnostic laboratories – so a test like this could be routine in the future.”

The researchers next tested the efficacy of palbociclib in mouse models of pancreatic cancer. At each step, they compared palbociclib (with or without gemcitabine chemotherapy) with standard chemo-only approaches.

The effects were dramatic, and were seen at all stages of pancreatic cancer progression.

Importantly, only mice with high RB tumours responded to palbociclib, highlighting its role as a targeted, subtype-specific therapy. “This gives us hope that, in people, measuring levels of RB could one day help us get the right treatment to the right patient,” Dr Pajic says.

“Excitingly, data from our patient samples shows us that, if a primary tumour has high RB levels, then it’s likely that the metastatic tumours will also. This means there’s a possibility that both primary and metastatic tumours could be targeted in the same patient in the future,” adds Dr Chou.

The researchers went on to explore in-depth how palbociclib acts to combat pancreatic cancer. They found that palbociclib, as well as targeting tumour cells directly, ‘remodels’ the extracellular matrix – the ‘web’ of molecules that surrounds and organises cells – in tumours with high RB levels.

“We think this remodelling, or softening, of the cancer environment is an additional key mechanism of palbociclib’s action against cancer. This is a fast-moving area – and work by Garvan researchers and others is making it clear that pancreatic cancer is profoundly affected by interactions with the matrix that surrounds it.”

The researchers also showed how palbociclib could inhibit the spread of pancreatic cancer to distant tissues. As they spread through the bloodstream, cancer cells are placed under physical stress (shear stress). The researchers showed that, when treated with palbociclib, RB-high tumour cells became very susceptible to shear stress – making it more difficult for them to thrive in the blood, and to survive and spread to distant organs.

More information on the potential of palbociclib as a targeted therapy to treat pancreatic cancer could be coming soon. "Excitingly, therapies that target the Cdk4/6 pathway are already in clinical trials for pancreatic cancer here in Australia – and we'd love to see testing for tumour RB levels in those trials to learn more about its power to predict treatment success in people."