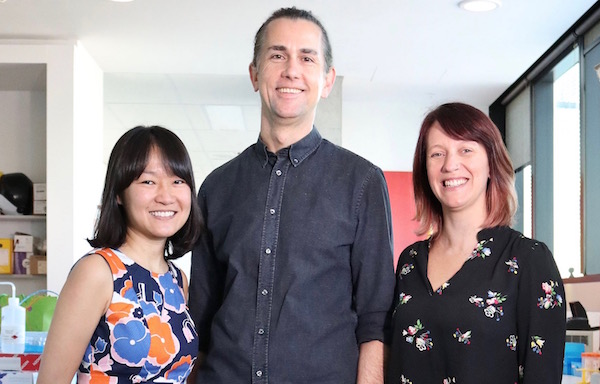 Australian researchers have uncovered a secret communication hotline between breast cancers and the normal cells surrounding them. Importantly, the messages sent back and forth between the normal and tumour cells encourage the cancer to survive and to become more aggressive.

Working primarily in mouse models of disease, and also in people (through a Phase I clinical trial), the researchers have shown that triple negative breast tumours – which are the most aggressive and have the fewest treatment options – might one day be treated with a drug that cuts the ‘phone lines’ between normal cells and tumour cells.

The findings, which have just been published in the leading journal Nature Communications, stem from a collaboration between researchers at the Garvan Institute of Medical Research (Sydney), the Centre for Cancer Biology (Adelaide), and GEICAM, Spain’s leading breast cancer research group.

Dr Aurélie Cazet and Dr Mun Hui worked with A/Prof Alex Swarbrick (all Garvan) to investigate the role of non-cancerous cells – which, along with cancer cells, are a part of every breast tumour. The researchers analysed the genetic output of thousands of individual cells within the tumour.

Importantly, they found that cancer cells send signals to neighbouring non-cancerous cells (known as cancer-associated fibroblasts or CAFs). And CAFs talk back: they send back their own signals that help the cancer cells become drug-resistant and enter a dangerous state the researchers call ‘stem-like’.

The researchers disrupted the hotline between CAFs and cancer cells by using a drug called SMOi, which targets CAFs and stops them from pushing tumour cells towards a ‘stem-like’ state (see below). In mouse models of triple negative breast cancer, treatment with SMOi reduced the spread of cancer, slowed tumour growth, increased sensitivity to chemotherapy and improved survival.

Following the success in mice, A/Prof Swarbrick worked with GEICAM to carry out a Phase I clinical trial in 12 advanced triple negative breast cancer patients who had relapsed after previously being treated with chemotherapy. Patients were given SMOi together with a standard chemotherapy drug (docetaxel) to determine whether the combination was tolerated by patients.

While the combination treatment did not halt cancer progression in nine patients, disease was stabilised in two patients and tumours fully disappeared in one patient.

“The combination of SMOi plus docetaxel produced a tumour shrinkage in some individuals with triple negative breast cancer, who were not expected to have such responses with docetaxel alone,” says Professor Miguel Martin, Chairman of GEICAM and principal investigator of the trial. “The challenge now is the identification of the molecular characteristics of the patients most likely to respond to the combination.”

“We observed that the trial participants who responded best to the treatment were the ones with evidence of the highest levels of chatter between CAFs and tumour cells,” remarks Dr Hui. “This is a preliminary finding, but is exciting, because it suggests that it might be possible in the future to identify patients who would respond best to this approach.”

A/Prof Swarbrick, who led the research, says it has led to a major step forward in our understanding of how CAFs can drive aggressive cancer.

“It’s the stem-like cells in breast tumours that are particularly bad players, as they can travel to distant parts of the body to create new tumours and are resistant to treatment,” says A/Prof Swarbrick. “We knew that CAFs played a role in turning cancer cells into a stem-like state, but now we know one way in which they communicate with tumours – and how to stop them talking to one another.”

A/Prof Michael Samuel (Centre for Cancer Biology) worked with A/Prof Swarbrick and Drs Cazet and Hui on the new research.

“We found that when they received signals from cancer cells, CAFs produced large amounts of collagen, a protein that forms a dense scaffold in the tumour, which increased its stiffness and helped to maintain the stem-like state of the cancer cells. When we disrupted the hotline in our models, collagen density was reduced and the cancer cells weren’t as stem-like anymore,” A/Prof Samuel says.

The breadth of this study, from cutting-edge single cell genomics (which explores which genes are turned on and off in thousands of individual cells) through to human clinical trials, has painted a comprehensive picture of how CAFs and tumour cells communicate to drive breast cancer progression and how this knowledge may be used to design more effective treatment.

“Single cell genomics was crucial for this research,” adds Dr Cazet. “We were able to take a tumour, separate out the cancer cells from the CAFs, and look in detail at the genes that were switched on and off in each cell type. In this way, we were able to uncover their communication strategy, and found the first ever evidence that we may be able to target this communication channel to improve outcomes in triple negative breast cancer.”

Phase I clinical trials in a small number of patients are now complete, and A/Prof Swarbrick and his medical collaborators are currently working on designing and funding Phase II trials to test the effectiveness of this treatment in a larger group of patients. In parallel, A/Prof Swarbrick has plans to investigate prostate cancer, where the same communication may be happening.

“We have preliminary clinical evidence that targeting the hotline between cancer cells and CAFs may be effective in breast cancer,” says A/Prof Swarbrick, “but we certainly hope that this strategy will have applications in other cancer types. We also hope this story will encourage others to look for answers outside the box or rather, outside the tumour cell.”

This work was supported by funding from the National Health and Medical Research Council, Love Your Sister, John and Deborah McMurtrie, the National Breast Cancer Foundation, RT Hall Trust and Novartis.

The Centre for Cancer Biology is an alliance between the University of South Australia and SA Pathology.