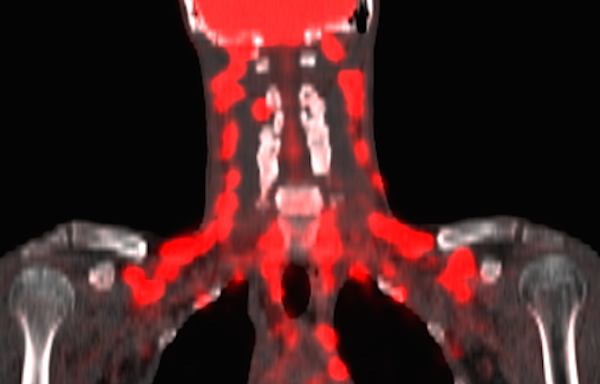 The incidence of type 2 diabetes, which is characterised by high blood sugar, is reaching epidemic proportions worldwide. There is a need for new insights into how blood sugar levels can be controlled, beyond mechanisms actioned by currently available therapies.

Now, researchers at Garvan have shown that brown fat may help to minimise fluctuations in blood sugar (blood glucose) concentration in adults. Their work is published today in the prestigious journal Cell Metabolism.

Unlike white fat, which primarily stores energy, brown fat burns energy – often in remarkably large amounts. Sitting just above the collarbone and in the neck, brown fat acts like a heat generator, helping to keep us warm by burning sugar and fat.

Dr Paul Lee and Associate Professor Jerry Greenfield, of Garvan’s Diabetes and Metabolism Division, have long been interested in whether brown fat might have a role beyond keeping us cosy.

Dr Lee says, “Brown fat takes up so much glucose that we wondered whether brown fat could affect the concentration of glucose in the blood – and whether, therefore, brown fat-targeted therapies might help control diabetes.

“Previously, we showed that individuals with large brown fat stores tend to be lean and have lower blood glucose – and now, we have uncovered a potential link between brown fat activity and blood glucose variations.”

The research team studied a group of 15 healthy adults over 12 hours. They found that blood glucose levels and heat production by brown fat were closely related, tracking together over time.

Dr Lee says, “It looks like the more brown fat one has, the more influence it has on blood glucose.

“Our findings indicate that brown fat might act as a ‘glucose buffer’, lessening the variation in blood glucose and potentially diminishing metabolic stresses that could increase the risk of diabetes.”

The study used a simple and non-invasive technique to measure brown fat activity: a small thermometer placed over the collarbone of participants.

Dr Lee says, “Brown fat sits just under the skin, and it heats up when it’s active. So, measuring skin temperature at the collarbone can allow us to estimate brown fat activity.

“This is the first time we have been able to simultaneously estimate brown fat activity and glucose changes continuously in real time. While it’s an indirect measure, it offers an opportunity to examine how brown fat relates to glucose during daily living.”

The researchers also made an intriguing observation: brown fat activity rose at dawn, around the time volunteers were waking from sleep. Dr Lee says, “We speculate that this early morning temperature boost may have an evolutionary origin, generating heat and preparing our ancestors for hunting and gathering in the cold as the day begins.”

Dr Lee says that brown fat-based therapies are potentially promising in the fight against diabetes in the future, but also urges caution.

“The study brings brown fat into the frame for developing diabetes therapies. If we can pinpoint what switches brown fat’s activity on and off during the day, we may identify new targets in drug design.

“Brown fat is interesting and promising – but it is not the solution to finding a cure for diabetes, at least not now. A balanced diet and regular exercise are the cornerstones of healthy metabolism and should not be forgotten.”