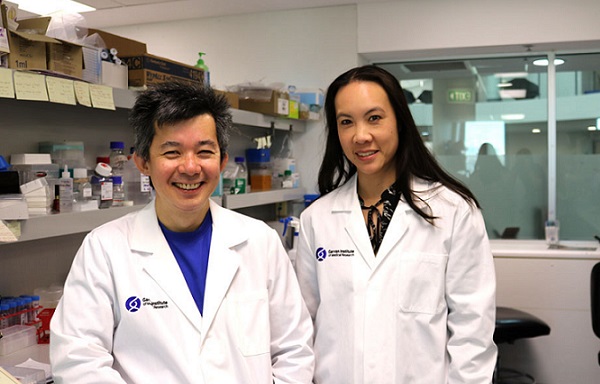 An interdisciplinary team of researchers and medical professionals, the Clinical Immunogenomics Research Consortium Australia (CIRCA), uncovered the genetic cause of a rare but severe immune disorder in a child that guided therapy going forward. The study, which was led by the Garvan Institute’s Associate Professor Tri Phan, Associate Professor Cindy Ma and Professor Stuart Tangye, and the Children’s Hospital at Westmead’s Dr Melanie Wong, was recently published in the Journal of Allergy and Clinical Immunology and is just one of over 30 cases where patients’ lives have been transformed through the CIRCA program.

Clues in the DNA

After suffering from severe symptoms related to the immune system from the age of 18 months, including a stroke after contracting chicken pox, the cause of a boy’s critical state of health was still a mystery. When he was nine years old, his doctors referred his case to CIRCA, a national Garvan-led collaboration of medical and scientific professionals that investigates the genetic causes of rare immune diseases.

The CIRCA team analysed the boy’s genome, all of his DNA, to find clues for the cause behind his symptoms. “By analysing the boy’s genetic information, we discovered a specific variant in a gene called STK4, which had never been reported before,” explains Associate Professor Phan, who heads the Intravital Microscopy Lab at the Garvan Institute. “This was a critical clue as other variants in the STK4 gene had been previously reported to cause immune deficiency in just half a dozen other patients around the world at the time. However, it was impossible to be sure whether this new gene variant, called Y88del, was responsible for his clinical symptoms, or whether there was another cause.”

Further, the boy’s four year old sister had also developed immune symptoms, including food allergies, eczema and anaemia, and analysis of his sister’s genome revealed that she also had the same STK4 gene variant.

“Confirmation that the variant in the STK4 gene was the cause of the problem, helped to guide treatment for his sister, and to prevent her from a similar life-threatening course,” says Associate Professor Phan. “What we know from patients with rare immune conditions is that early diagnosis is crucial. If we can treat these patients before they get really sick, the outcome is so much better.”

In laboratory mice, the team replicated the siblings’ Y88del variant in the STK4 gene and then compared the symptoms of nine other, previously unreported, patients with STK4 gene variants from five unrelated families, which had been identified through international networks established by CIRCA investigators.

They discovered that the mice had lower levels of antibodies and white blood cells called B cells than healthy mice, which were similar symptoms to the STK4 variant patients.

Further, CIRCA researchers discovered the underlying cause – the Y88del gene variant caused a direct deficiency in B cells, rather than this being a secondary result of defects in other immune cells. This was a key clue because while a bone marrow transplant will replace a patient’s defective B cells and other haematopoietic cells, it cannot treat deficiencies in non-immune cells.

“Thanks to the combined expertise of CIRCA, a definitive diagnosis was made, confirming the importance of bone marrow transplantation as a potential cure for this rare disease. As a result of the transplant, the prognosis of both patients is excellent” says Dr Melanie Wong, who first referred the brother and sister. “Bone marrow transplants are high risk, invasive procedures and we would not have carried out a transplant in the boy’s sister without good evidence that the STK4 gene variant put her at risk of developing the severe life-threatening symptoms her brother had endured.”

Through CIRCA, Garvan researchers are working closely with other scientists and health professionals to accelerate rare disease discoveries. “To solve these cases, we come together – literally, around one table – and talk about the next best steps for the patient,” says Professor Tangye. “The CIRCA program is an entirely patient-focused collaboration with clinicians.”

Over 70 medical cases, most of which are children, have been investigated through the CIRCA program, which has had a 40 percent success rate of providing a genetic diagnosis, leading to access to treatments that would otherwise not have been considered.

“While we continue to make new discoveries about how the immune system works, at the end of the day the most gratifying thing we do in CIRCA is that we’re able to help the patient by establishing a diagnosis – as quickly as possible,” says Associate Professor Phan.

CIRCA’s mission is to: