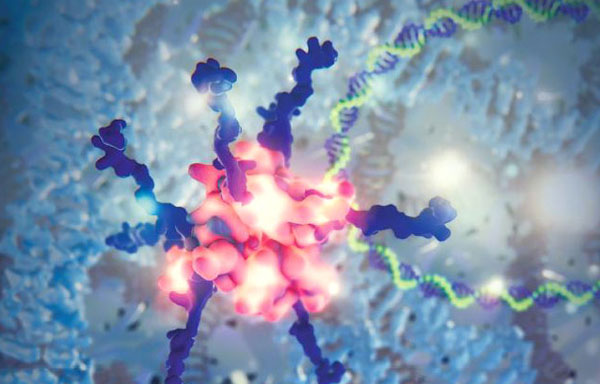 There are three billion letters in the human genome. If read out loud for 24 hours a day, it would take a century to finish. Garvan has now sequenced more than 15,000 human genomes. And this is just the tip of the research data iceberg we’re collecting across our six divisions and our centres.

So how do researchers make sense of this huge amount of information that’s not humanly possible to ‘read’ in a traditional way? Garvan is creating new ways to digest the overwhelming size and complexity of this research data.

The moment of insight

“Our researchers gather data and then analyse it in various ways. But, ultimately, they have to look at it in order to make sense of it,” says Professor Seán O’Donoghue, Garvan’s Head of Biodata Visualisation and Office of the Chief Executive Science Leader at CSIRO’s Data61.

“Most discoveries have been made shortly after someone ‘saw’ the data and thought about what they saw. And so our goal is to take the data plus analysis and create a system that puts it in front of the right researcher at the right time, so they can see something and have that moment of insight.”

To achieve this, Garvan has created a new Biodata Visualisation Centre. “Single cell sequencing is one example. They need completely new solutions that can be applied to completely new biological problems. If a view is going to be insightful, it has to have clarity to facilitate discovery and insight,” explains Professor O’Donoghue.

“The systems we’re building for the researchers enable them to navigate through the data to see patterns.”

In another realm of the visualisation sphere, Dr Kate Patterson, Senior Visual Science Communication Officer, is creating new ways to reveal the fascinating interior worlds our researchers are exploring. “To see a process happening, rather than read about it, can make a huge difference in people’s understanding of complex scientific concepts and medical problems,” says Dr Patterson.

“The real advantage of having immersive technologies to communicate biological information is that you can take the audience to a place they can’t physically go.”

Dr Patterson, a scientist and animator, began by making animations for the screen. “These were viewed at festivals and online. People kept asking me if they could interact with the molecules and get a more meaningful experience.”

The Cell Observatory is an immersive visualisation dome, using a planetarium-style projection device. It’s open to the public on Garvan Discovery Tours. “In the observatory it feels like you’re inside a cell,” says Dr Patterson. “You can have a curated explanation about what’s happening.”

The other experience is in virtual reality (VR). The first step was to create an app designed for Google Cardboard. Users can download GarvanVR to look at 3D animation in 360 degrees. “They can see molecules up close – see what it is the scientists have been working on at the molecular level.” The appeal of Google Cardboard is that it’s so accessible – anyone can purchase one to use with their own smartphone.

The extension of this is a room-based VR experience using HTC Vive technology, called Cell Explorer. In this environment, users are able to grab molecules with controllers. “You can transport yourself through a cell membrane, into the nucleus. You can manually activate gene transcription or turn off a gene by wrapping DNA around proteins called nucleosomes,” describes Dr Patterson. “It’s really powerful being able to control your own experience.”

A journey of discovery

Dr Patterson’s ambition for Garvan’s animation and VR creations, is that it will inspire users to continue their journey of education. “I’d like everyone to take action to find out more, whether that be to go to the website, speak to a scientist, have more awareness. Presenting it in an interesting way aids understanding of biological processes and encourages conversation; that’s really the beginning.”

Professor O’Donoghue says there’s a strong need for data visualisation in a clinical setting, both in how data is presented to clinicians, and how they communicate those insights to their patients. He says the third leading cause of death in the US is medical error.

“Most misdiagnoses are by informed clinicians with the right data in front of them but making cognitive errors. Ideally, data visualisation off-loads the cognitive burden so clinicians can better serve their patients and researchers can see results in new ways, which will hopefully initiate new findings.”

Read more about visualisation and education at the Garvan-Weizmann Centre for Cellular Genomics.