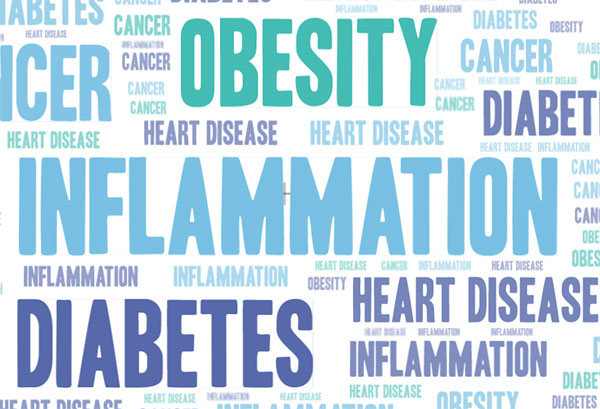 Obesity is a global epidemic: in the western world, one in three adults is obese. But obesity is more than just extra weight. Obese individuals have a heightened risk of many other disorders – from type 2 diabetes to heart disease, and even cancer.

And the missing link between obesity and its associated diseases? Researchers believe that this is ‘inflammation’ – in which the body’s immune system stays in an overactive state for long periods. Although inflammation plays an important role in defending the body during infection, prolonged inflammation (such as in obesity) can help disease to thrive throughout the body.

In obese individuals, fat pushes the immune system into ‘inflammation mode’ – but crucially, fatty tissue in leaner individuals doesn’t have the same effect. Researchers think this is why such a wide range of diseases are more common in the obese.

Now, an Australian research team has published new findings that help uncover precisely how fatty tissue in obese individuals triggers inflammation. Their research up-ends our understanding of how ‘obese fat’ talks to the immune system – and points to new possibilities for future therapies.

The research was carried out with immune cells from mice, and was undertaken by Sydney’s Garvan Institute of Medical Research and Melbourne’s Baker Heart and Diabetes Institute. The findings have recently been published in the leading journal Cell Metabolism.

The research team set their sights on the very first step in the journey from fat to inflammation: the moment when obese fat sends a message to cells of the immune system, pushing them towards an inflamed state.

They focused on ‘fatty acids’, which are known to be released in large amounts from fat in obese individuals.

“It’s these fatty acids that are driving the immune system towards inflammation in obesity,” says Professor Mark Febbraio (Head, Diabetes and Metabolism Division, Garvan Institute of Medical Research), who led the new research.

“We chose to take a fresh look at how fatty acids connect with immune cells, because there were hints from our studies and those of others that this early step towards inflammation had been misunderstood for decades.”

Before the new findings, it was thought that fatty acids switched on ‘inflammation mode’ by binding directly to a particular protein (TLR4) on the surface of immune cells. The new research showed that this wasn’t in fact how it happened.

The researchers started their quest for answers by looked closely for definitive evidence that fatty acids were binding to, and activating, TLR4. But they came up empty-handed.

However, a second series of experiments confirmed that the TLR4 protein was in indeed crucial for switching on ‘inflammation mode’.

“We were left with a paradox,” says Dr Graeme Lancaster (Baker Institute), who co-led the research with Prof Febbraio.

“We showed that fatty acids don’t drive inflammation through TLR4 – but TLR4 is clearly still a key part of the inflammation story. So, the next question was what its role might really be.”

Through a third series of experiments, the team discovered that TLR4 ‘reprograms’ immune cells, making a series of major changes to their molecular building blocks. This ‘reprogramming’ is an important part of the path to inflammation, because fatty acids can’t switch on ‘inflammation mode’ without it.

The researchers next zeroed in on one of the many intriguing changes that happens during reprogramming of immune cells. They showed that there was a big difference between the mixture of lipids in the membranes around the immune cells, and within them, before and after reprogramming.

“No one had witnessed this reprogramming before,” says Prof Febbraio. “It’s a real eye-opener, and it makes it clear that there are steps on the path to inflammation that we had no idea about before.

“And because these are early steps,” Dr Lancaster adds, “there’s the chance to intervene before the switch has been flipped and the damage has been done.”

The findings open up several new approaches to halting obesity-induced inflammation. In particular, Prof Febbraio says, targeting the changes to membranes is a promising approach for therapeutic discovery.

“There’s a great satisfaction in the knowledge that this will accelerate drug discovery for type 2 diabetes and a wide range of obesity-associated diseases,” he says.

“More than that, though, this is a breath of fresh air. Whenever existing understanding is overturned in medical research, there’s a chance to spark fresh thinking – and that’s certainly the case here.”