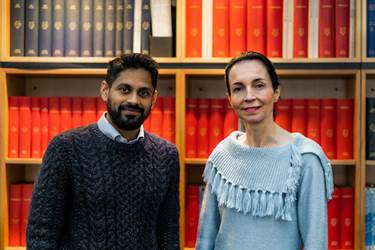 Research by the Garvan Institute of Medical Research has revealed a new way to group cancers based on their DNA ‘signatures’.

This discovery, among others, is based on data analysed through Project Decode on the DreamLab app, which was fuelled by the growing phenomenon of citizen science.

The findings, posted on BioRxiv (a preprint server) are the product of analyses of 3750 genomes spanning eight different cancer types.

Researchers have found a new way to ‘cluster’ cancers together, grouping individual cancers in a way that could indicate the best treatment for each one.
While the findings are preliminary, it is hoped that this new way of classifying cancers could bring the medical world a step closer to realising the potential of personalised medicine – providing treatment and monitoring that’s targeted to each individual patient.

DreamLab, an innovation created by Garvan and The Vodafone Foundation in Australia, works by harnessing the idle processing power of users’ smartphones to solve complex cancer problems and send the results back to Garvan for analysis. Over 300,000 people have downloaded DreamLab and joined the ‘citizen science’ movement.

Dr Mark Pinese, Senior Research Officer at Garvan, is encouraged by what these initial findings could mean for future cancer treatment.

“By using the power of DreamLab to crunch genomic data from The Cancer Genome Atlas (TCGA), our team of researchers uncovered a new way of looking at mutations in cancer,” said Dr Pinese. “This is an interesting finding as in the clinic it could help us determine which type of cancer a patient has, and the best treatment for that cancer. This is a key goal of personalised medicine.”

From body parts to DNA signatures

Traditionally, people think of cancer as being specific to a body part – such as lung cancer or breast cancer. However, researchers now know that it is predominantly the DNA changes in an individual’s cancer, not its tissue of origin, which sheds light on how to best treat and manage it.

Scientists are still in the early stages of understanding exactly how to read a cancer’s DNA for clues as to how best to treat it, and how aggressive it is. So far, researchers have mostly looked for DNA changes in one or a few genes at a time– but the new DreamLab-enabled research takes a more sophisticated approach, looking instead for changes in groups of 7-20 genes.

Genes inside people’s cells code for proteins, and proteins carry out the work of the cell – so gene changes can affect how proteins work. Importantly, proteins are constantly interacting with one another as they carry out the cell’s work.

The researchers wanted to know whether groups of interacting proteins – which they call ‘cliques’ – might hold the key to how best to treat cancers. They reasoned that the cancers with changes in the same clique of proteins would be controlled in similar ways, and might therefore respond similarly to treatments.

The Garvan team matched the gene changes in 3750 cancers with the corresponding protein changes and interactions across a massive network of about 20,000 proteins.  This revealed 141 different clusters, which were agnostic of the cancer's tissue of origin.

Dr Catherine Vacher, is the co-first author on the paper.

“We used an algorithm that can detect communities in social networks to identify groups of proteins that interact with one another – which we call ‘cliques’ – that were altered in the cancers," Dr Vacher said. "We see a future where one day a genomic test could classify a patient’s cancer and give their oncologist insight into the best treatments for that patient.”

Through the assistance of The Vodafone Foundation’s DreamLab app, Garvan was able to harness the idle processing power of thousands of smartphones across Australia, and more recently in New Zealand and the UK, to halve the time it would have otherwise taken to crunch the data in Project Decode.

“With one in two Australians set to be touched by cancer directly at some stage in their life, we see Garvan’s research as vital to improving the health of the nation,” said Megan Retka-Tidd, Head of The Vodafone Foundation. “Garvan’s initial findings are truly exciting and point to the power of handheld technology, combined with leading scientists, to help speed up cancer research. Collectively, DreamLab users donated sixty million hours to Project Decode to speed up this research.”

Dr Swetansu Pattnaik, is the co-first author and bioinformatician at Garvan.

“Citizen Science, such as the contribution of thousands of people to DreamLab, is truly astounding," Dr Pattnaik said. "While these are early findings, we look forward to the global medical community poring over, critiquing and adding to them.

“We are already working to translate this clustering approach into clinical practice in the future.”

Coinciding with the release of the initial Project Decode findings, the next research project – Project Demystify has launched on DreamLab.

Project Demystify seeks to understand, or connect the dots, between physical human traits – hair colour, height, blood pressure, and, at times, symptoms of disease – and their genetic basis.

To achieve this, existing data on individuals’ traits (which will be sourced from clinical information and wearable devices such as fitness wristbands) will be correlated with individuals’ genetic information.

People are encouraged to download DreamLab from the App Store and Google Play Store.

More about the Garvan Institute of Medical Research

More about The Vodafone Foundation