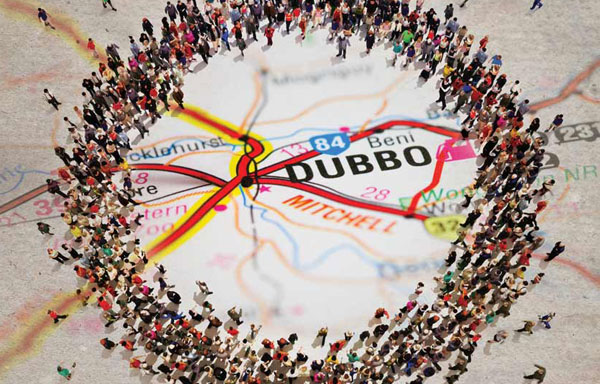 What did 1989 have in store for you? For residents of the 2830 postcode aged 60 or over, this was the year
they received an invitation to become founding members of the medical research cohort that, to this day, underpins the Dubbo Osteoporosis Epidemiology Study (DOES). Over the decades since, we have seen a transformation
in our knowledge of osteoporosis, much of which is due to this study, one of the world’s largest and longest- running for the disease.

“We used to think that osteoporosis was only something that happened in ‘little old ladies’ – you’d think of hip fractures and people bent over. What we’ve realised is that it’s something that occurs across a wider age range, it affects both men and women, it affects virtually every bone in your body, and it’s associated with huge impacts on the quality of life, health care costs and indeed premature mortality,” says Professor John Eisman, who founded DOES and is one of its principal researchers alongside Professors Jacqueline Center and Tuan Nguyen.

Such understanding is hard-won in the face of a disease that is insidious on multiple levels. Symptom-free, osteoporosis often lurks undetected in the skeleton until a bump or minor fall leads to a fracture. Although bone density is useful for identifying those at high risk, it is not a reliable predictor of – nor protector from – fragility fracture. Despite its devastating impacts, fracture does not attract the same attention as cardiovascular disease or cancer in either the general or medical communities, and there remains a perception that it is a normal part of aging rather than the outcome of disease. As such, osteoporosis continues to be underdiagnosed and undertreated.

Osteoporosis is also tricky to pin down in a research setting, and DOES has required one of the most ambitious and resource-intensive methodologies out there: the longitudinal cohort study. As fractures are relatively infrequent in a lifetime, it is necessary to follow a large number of people for a long time to accumulate meaningful data. Such data can then be analysed to link events with outcomes, as Center points out: “The study is incredibly valuable precisely because

it is so long-term. It has enabled us to follow what happens to people prior to fracture, what happens to risk factors, what happens to the change in people over time and what happens to outcomes. You can’t actually do that unless you have a study that goes on for many, many years.” Dubbo, too, is an ideal setting because, apart from the population’s size, stability and capacity to extrapolate to the rest of Australia, it has the only major hospital in the region and thus captures all the medical events the residents might experience.

Despite being a remarkable achievement in science, DOES’s true heroes are the thousands of Dubbo residents who have volunteered their time and biological information for medical research. Every two to three years, each undergoes a series of tests – bone mineral density, blood tests, a total body scan, balance tests, muscle tests, touch tests, questions about lifestyle, medications, other illnesses, sleep and quality of life.

If the client has had a fracture they submit to further enquiries about its every detail. Given such scrutiny it is remarkable that the drop-out rate is minimal, which is largely attributable to the attentiveness and care of the nurse managers in Dubbo, Janet Watters, recently retired, and Jodie Martin. “It’s always been my main criterion in this clinic that everyone who leaves here is smiling and happy to come back again,” says Watters.

The wealth of data and insight has certainly validated the approach. Among DOES’s many findings are four “greatest hits”:

Perhaps the most enduring contribution of DOES, however, is in its role as a resource for the research community. In 2016 Drs Yvonne Selecki and Mohammad Ali Moni won the Ridley Ken Davies Award, which allowed them to transform the study’s unparalleled archive of data into a web-based portal. The 2017 award winner, Dr Thomas Cox, will use the data for breast cancer research, demonstrating its versatility beyond osteoporosis.

The DOES team, too, has plans to maximise the study’s potential in this new age of genomic technology. “My vision for the future of the study is threefold,” says Nguyen. “If we can sequence the genomes we would have a wonderful genomic reference database. But the major question is the combination of genes and the environment. These days with a single drop of blood we can analyse up to 500 markers of environmental exposure, or the ‘exposome’. Then we
can integrate the genome and exposome and discover how they interact. And that leads me to the third perspective, the ‘diseasome’. A person does not have just one disease; they have multiple diseases, which seem to link, surprisingly. Then, we can study not just osteoporosis but the diseases that are linked to it in the diseasome.”

While we celebrate DOES’s achievements, both to date and to come, the science is underscored by a respect and
gratitude towards the people who have contributed their time, data and biomaterials to medical research. As Watters says: “It’s the people who make the study and they’re wonderful people. They know they’re here to help mankind, they know they’re here for the future of their children, their grandchildren, their great-grandchildren, and this is their way of participating in that future.” Through the participants’ contribution, the name “Dubbo” has gained new meaning in medical parlance and they leave better health for all as their legacy.