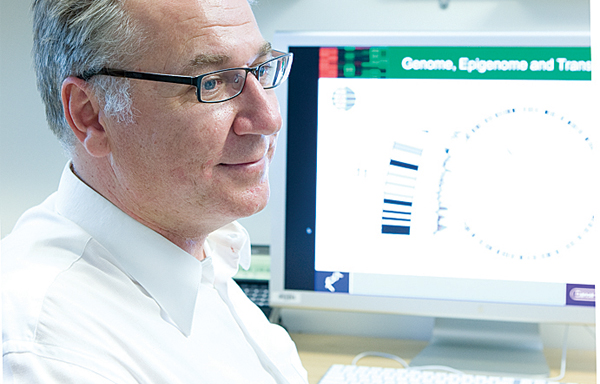 Pancreatic cancer likely takes between 10 and 20 years to develop, providing the potential for a very “broad window” of intervention if detected early, which may be possible for people who inherit a predisposition, say Australian clinical researchers.

Dr Jeremy Humphris and Professor Andrew Biankin1, from Sydney’s Garvan Institute of Medical Research, analysed medical histories and tumour samples taken from a cohort of 766 pancreatic cancer patients, operated on between 1994 and 20122. Roughly 9% of these patients had a first-degree relative (parent or sibling) with pancreatic cancer, a figure consistent with other studies.

Patients with close relatives were shown to be more far more likely to have at least one other form of cancer, as were relatives. In 71% of affected parent-child pairs, the child was around 12 years younger at diagnosis, which may reflect an inheritance phenomenon known as ‘anticipation’. Active smokers were 10 years younger than the norm at diagnosis (as opposed to 5 years younger in patients who had not inherited the disease).

In a paper just published online in Cancer, a peer-reviewed journal of the American Cancer Society, the authors suggest that it should now be possible to identify novel susceptibility genes, and at the same time design risk management and screening programs for the genetically susceptible group.

Pancreatic cancer is a lethal disease with a 5-year survival rate of less than 5%. Most patients cannot be saved because diagnosis comes only after the disease is advanced or has spread. Long-term survivors are those who have small tumours which can be totally removed, and whose lymph nodes are clear of disease.

The greatest known risk factors are cigarette smoking and a family history of the disease. Other risk factors include diabetes and obesity and, to a lesser extent, alcohol consumption.

“Our findings suggest that when we’re assessing someone, it’s important to understand the family history – not just of pancreatic cancer, but other malignancies too,” said Dr Jeremy Humphris.

“Smoking led to a much earlier onset of disease, so obviously you would counsel against smoking, especially in those who are genetically susceptible.”

Professor Andrew Biankin concurred, observing that “a better understanding of the clinical features of genetically at-risk individuals will help us identify susceptibility genes as well as those who might benefit from genetic counseling and screening for detection of early disease”.

1. While still a member of Faculty at the Garvan Institute, Professor Biankin is also Regius Professor of Surgery at the University of Glasgow in Scotland and is based at the Wolfson Wohl Cancer Research Centre.

2. Collection of tumour samples and patient histories was undertaken by the Australian Pancreatic Genome Initiative (APGI). APGI is the Australian arm of the International Cancer Genome Consortium (ICGC), and aims to catalogue all the genetic changes in pancreatic cancer by analysing the biological material from patients diagnosed with pancreatic cancer.

This work is supported by the National Health and Medical Research Council of Australia (NHMRC), Cancer Council NSW, the Cancer Institute NSW, Queensland Government (NIRAP); Institute of Molecular Bioscience at the University of Queensland; the Avner Nahmani Pancreatic Cancer Foundation, and Jane Hemstritch in memory of Philip Hemstritch.