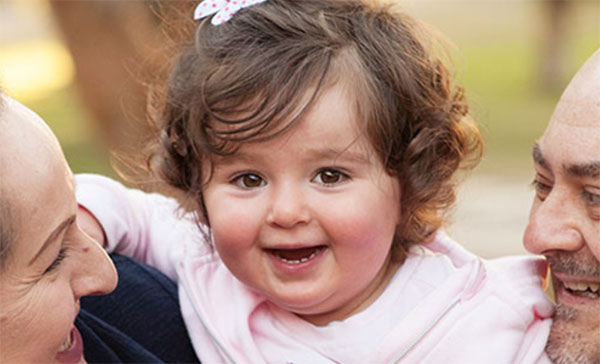 Ellie has just turned 2, and she's an active, boisterous toddler

Read more about Ellie on the Children's Cancer Institute website

Led by Children’s Cancer Institute and the Kids Cancer Centre at Sydney Children’s Hospital, Randwick, the program uses a wide range of cutting-edge technologies, including genomic technologies, to better understand each child’s cancer. It aims to prove that personalised medicine – tailoring treatment recommendations to individual children’s cancers through better scientific analysis of their tumours – can change outcomes.

The power of genomic information in childhood cancer

The Garvan Institute of Medical Research and Lions Clubs Australia are proud to be two of the partners in the Zero Childhood Cancer program.

Through the Lions Kids Cancer Genome Project (Genome Power), Garvan and Lions are bringing the power of whole genome sequencing to Zero Childhood Cancer. Together, they are sequencing and analysing the tumour and normal genomes of children enrolled in Zero Childhood Cancer. This means that they read the entire DNA sequence (over 6 billion DNA bases, or letters) of each child’s tumour, and compare it to DNA sequence from elsewhere in the body, to gain vital clues about how the tumour has developed and what drives it.

Whole genome sequencing has been a crucial part of Ellie’s journey with the Zero Childhood Cancer program (see below). Through whole genome sequencing, Garvan researchers were able to identify the genetic change that was likely to be critical in driving her cancer’s growth.

Ellie’s story: uncovering what made her tumour tick

A year after the world-first Zero Childhood Cancer national clinical trial was opened, almost 130 children with serious and aggressive cancers have been enrolled on this state-of-the-art personalised medicine clinical trial that aims to give them the best possible chance of survival and quality of life.

One of those children is Ellie.

Ellie was just eleven months old when she was admitted to the Sydney Children’s Hospital, Randwick having been unwell for just a couple of weeks. A scan revealed a tumour so large in her chest it was pushing her heart to the right side of her chest. Within day, Ellie was in the Intensive Care Unit, on life support, because her little lungs could no longer help her to breathe unaided. The tumour – sarcoma – was aggressive, rare and resistant to chemotherapy.

Ellie was immediately enrolled onto the Zero Childhood Cancer Program, which meant her tumour biopsy was subjected to detailed genetic analysis, with the Zero team working around the clock to get results as soon as possible, as Ellie’s condition was critical.

Whole genome sequencing performed through the Lions Kids Cancer Genome Project identified Ellie’s cancer as infantile fibrosarcoma with a rare ‘translocation’ – a reorganisation of DNA – that was likely to be critical in driving her cancer’s growth.

Dr Mark Cowley (Garvan) leads the genomics team who uncovered the translocation in Ellie’s tumour DNA. He says, “The opportunities to make a difference are so great for the Zero Childhood Cancer program: we know that our findings can be crucial in determining the optimal treatment for a child.

“That’s why it was a special day for us when we found the translocation and identified it as the likely driver of Ellie’s cancer,” Dr Cowley adds.

Crucially, the research and clinical teams had recently learnt about a new drug developed by the US company Loxo Oncology, that targeted the exact translocation now identified in Ellie’s tumour. Loxo Oncology agreed to provide the drug on compassionate grounds, so treatment could begin.

Within four weeks, Ellie’s cancer had shrunk to a point where Ellie was off life support and could breathe on her own. And six weeks later, she was home.

As Mina, Ellie’s mother explains, “We were told to think about saying goodbye, she was so sick we didn’t even know if she would reach her first birthday. Now today to be celebrating her second birthday, when she is such an active, boisterous and energetic two-year-old is beyond our wildest dreams. We can’t thank the teams at the children’s hospital and research institute enough.”

Ellie’s story: a new approach made available to others

A clinical trial of larotrectinib, the drug used to treat Ellie, is now open in Australia for all children whose cancer is identified by the Zero Childhood Cancer program as having this same genetic change as Ellie’s cancer. This means that these children will have access to this targeted therapy, which appears to be both more effective and far less toxic than standard chemotherapy.

A year of Zero Childhood Cancer

One year since its launch, Zero Childhood Cancer has produced some remarkable results for children like Ellie. Childhood cancer is extremely complex, meaning this kind of ‘evidence-based miracle’ will not be possible immediately for every child. However, the more that is understood about what drives the growth of childhood cancers and the more drugs that are developed to combat these drivers, the greater number of children with remarkable success stories like Ellie’s are likely in the future.

In summary, here are key outcomes of Zero Childhood Cancer in the past year:

ABOUT THE ZERO CHILDHOOD CANCER PROGRAM

Zero Childhood Cancer is one of the world’s most comprehensive child cancer personalised medicine studies and is led by Children’s Cancer Institute and the Kids Cancer Centre at Sydney Children’s Hospital, Randwick, in collaboration with scientists from nineteen leading Australian and international research institutes and doctors from all eight of Australia’s paediatric cancer centres.

More than 200 children and adolescents in Australia will be diagnosed this year with a cancer type that has less than 30% survival, either on first diagnosis or after relapsing from their disease. The Zero Childhood Cancer program recognises that each child’s cancer is unique, so they respond differently to anti-cancer treatment. Detailed laboratory analysis of tumour samples will help identify the drugs most likely to kill each child’s specific cancer.

Each fortnight a Multi-Disciplinary Tumour Board meets, comprising of clinicians from around Australia together with scientists, bioinformaticians, geneticists, pathologists and biologists to review the complex information from the sophisticated Zero Childhood Cancer testing platform and recommend a personalised treatment plan for each individual child.

The Zero Childhood Cancer national clinical trial will recruit 400 children nationally over a 3- year period. In addition to benefitting children on the clinical trial, Zero Childhood Cancer will mean that the knowledge and understanding of these aggressive cancers at a molecular level, will be shared with collaborators and partners nationally and internationally to benefit all children with cancer in the future. Thus, the data gathered will enable evidence-based treatment options in the present, also building a powerful research repository for the future, enabling further discoveries to flow from the trial.

Hospitals and research centres participating in Zero Childhood Cancer include:

NSW – The Children’s Hospital at Westmead