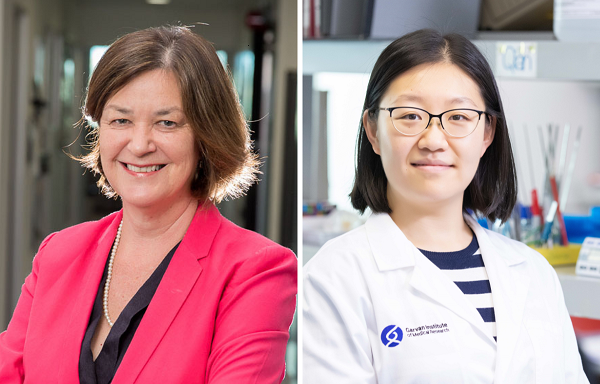 Researchers led by the Garvan Institute of Medical Research have discovered new insights into DNA demethylation – a change to the ‘epigenome’ (the additional layer of instructions on our DNA) that occurs gradually as we age and is found at high levels in many cancers.

The team has revealed that demethylation can change the sequence in which DNA is copied when cells divide and also destabilise DNA’s three-dimensional structure. The findings provide potential new insights on cancer formation and may have implications for the impact of epigenetic therapies, which are already undergoing clinical trials.

“Our discovery may contribute to an entirely new basic understanding of how cancers develop,” says Professor Susan Clark, Garvan’s Genomics and Epigenetics Research Theme Leader and senior author of the paper published in the journal Cell Reports.

“This study provides evidence that DNA methylation is more than just something that controls how DNA is read – it clearly plays a key role in the way the DNA is organised in our cells in three dimensions.”

Over recent years, geneticists have learnt that cancer is associated with more than just changes in the letters of our genome. Demethylation – whereby DNA loses methyl tags usually attached to it – also commonly occurs in most cancer types.

“We know that, for instance, loss of methylation at certain promoter regions, which are responsible for turning genes on, can result in activation of oncogenes that can cause cancer,” says Dr Qian Du, first author of the study. “But there are 28 million sites that can become methylated across the genome during normal development, and we were interested in whether there were any further consequences that occur due to loss of methylation in cancer cells – specifically, whether methylation loss could affect how the cancer genome is organised.”

Using a single cell analysis technique developed at Garvan, the researchers investigated the effects of DNA demethylation on DNA replication. When cells divide, the DNA in them is copied not at once but in a carefully choreographed sequence of steps across the cell cycle. In most cells of the same cell type there is a distinct order of events with some genes replicated first, others replicated later.

“However, what we found in our study was that demethylation in cancer cells was associated with this carefully choreographed timing becoming less organised, and the sequence of DNA replication becoming more random or ‘heterogeneous’,” says Dr Du. “Further, we found that replication timing and the 3D organisation of DNA was very much linked. When the replication timing changed, the 3D architecture also changed – suggesting you need one to control the other.”

“For a long time, researchers have expected loss of methylation to lead to a change in gene activity due to activation of repressive marks that control gene expression patterns,” says Professor Clark.

But we see that loss of methylation also leads to loss of precision in how cells replicate their DNA and how that DNA is packaged in 3D within cells– showing that demethylation of the cancer genome is associated with loss of replication timing control and loss of the 3D DNA stability and that hasn’t been appreciated before.”

“Replication timing heterogeneity and changes in 3D stability may seed the soil for the evolution of many different types of genomic alterations, giving the cancer a selective advantage under different therapy conditions,” says Professor Clark.

“This work reveals an additional consideration for the development of epigenetic therapies for cancer and which are already being investigated in clinical trials,” adds Dr Du. “Further understanding the impact of demethylation resulting from epigenetic therapies will be important in the future to determining which patients could benefit most from this form of therapy.”