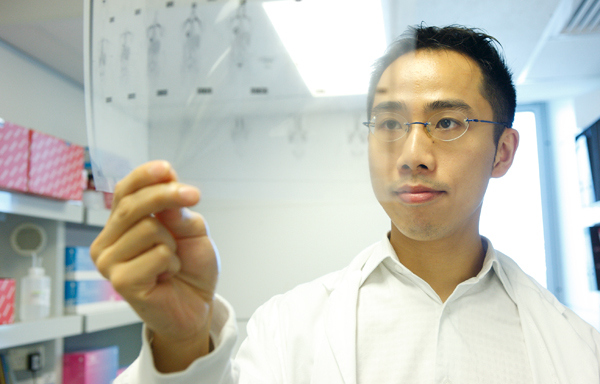 A new study suggests that shivering and bouts of moderate exercise are equally capable of stimulating the conversion of energy-storing ‘white fat’ into energy-burning ‘brown fat’.

His work uncovered a way that fat and muscle communicate with each other through specific hormones – turning white fat cells into brown fat cells to protect us against cold.

Dr Lee showed that during cold exposure and exercise, levels of the hormone irisin (produced by muscle) and FGF21 (produced by brown fat) rose. Specifically, around 10-15 minutes of shivering resulted in equivalent rises in irisin as an hour of moderate exercise. In the laboratory, irisin and FGF21 turn human white fat cells into brown fat cells over a period of six days. The study is now published in Cell Metabolism.

We are all born with supplies of brown fat around our necks, nature’s way of helping to keep us warm as infants. Until only a few years ago, it was thought to vanish in early infancy, but we now know that brown fat is present in most, if not all, adults. Adults with more brown fat are slimmer than those without.

“Excitement in the brown fat field has risen significantly over last few years because its energy-burning nature makes it a potential therapeutic target against obesity and diabetes,” said Dr Lee.

In the current study, Lee set out to understand the mechanism underlying the activation of brown fat. It was already known that cold temperatures stimulate brown fat, but was unclear how the body signals that message to its cells.

The body can sense and relay environmental changes to different organs via nerves and hormones. Being an endocrinologist, Lee investigated the hormones that are stimulated by cold environments.

“When we are cold, we first activate our brown fat because it burns energy and releases heat to protect us. When that energy is insufficient, muscle contracts mechanically, or shivers, thereby generating heat. However we did not know how muscle and fat communicate in this process.”

“So we exposed volunteers to increasing cold, from 18 to 12 degrees, until they shivered.  We drew blood samples to measure hormone levels and detected shivering by special devices placed on the skin that sense muscle electrical activity.”

“Volunteers started to shiver by around 16 or 14 degrees, varying between individuals.”

“We identified two hormones that are stimulated by cold – irisin and FGF21 – released from shivering muscle and brown fat respectively. These hormones fired up the energy-burning rate of human white fat cells in the laboratory, and the treated fat cells began to emit heat – a hallmark of brown fat function.”

A team from Harvard University discovered irisin through NIH-funded research in 2012, identifying it as a muscle hormone stimulated by exercise that turned white fat in animals into brown fat.

The puzzling aspect of the finding was that exercise itself produces heat, so why would exercising muscle initiate a process that would generate yet more heat?

Lee invited cold-exposure study participants to take part in exercise tests to compare the two processes. “We found that exercising for an hour on a bicycle at a moderate level produced the same amount of irisin as shivering for 10-15 minutes,” he said.

“We speculate exercise could be mimicking shivering – because there is muscle contraction during both processes, and that exercise-stimulated irisin could have evolved from shivering in the cold.”

“From a clinical point of view, irisin and FGF21 represent a cold-stimulated hormone system, which was previously unknown, and may be harnessed in future obesity therapeutics through brown fat activation.”

*The study was conducted at and supported by the Intramural Research Program of the National Institute of Diabetes and Digestive and Kidney Diseases at the NIH. The content of this news release is the sole responsibility of the authors and does not necessarily represent the official views of NIH.

Dr Lee’s role in the study was also supported by the Royal Australasian College of Physicians Foundation and the School of Medicine at The University of Queensland.