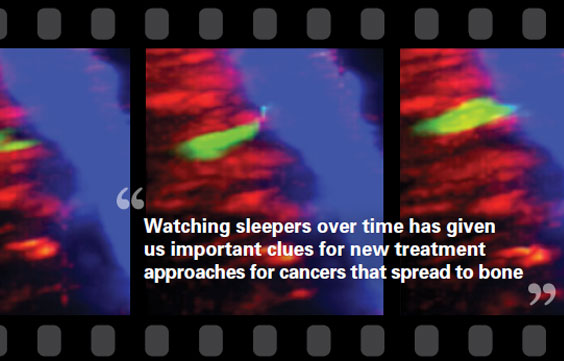 It’s 2013. In a dimly lit room deep in the underground of the Garvan Institute, researchers Dr Michelle McDonald and Dr Tri Phan are staring at a computer screen as a green shape crawls slowly  through a sea of blue. And then comes the moment they’ve been working towards for years: the shape slows and then abruptly stops. McDonald and Phan are the first ever to witness, in real time, as a cancer cell arrives at the bone marrow of a living animal and then climbs in.

It was a moment that began a remarkable journey of discovery for the research team, one that would deliver an entirely new understanding of how cancer cells “sleep” in bone, why they "wake" to  form secondary tumours, and how they might one day be stopped in their tracks.

When cancer spreads to the bones

The research team, led by Professor Peter Croucher, Head of Garvan’s Bone Biology Division, had long been seeking to understand precisely what happens when cancers spread to the skeleton.  Once a cancer spreads to bone, it becomes notoriously difficult to treat,” he says. “We want to change that. The first step to new treatment approaches is to understand exactly what’s happening to those cells.”

Bone can act as a landing place for cells that spread from many cancers, but it has particular clinical significance in multiple myeloma, breast and prostate cancer. When cells from these cancers journey through the bloodstream, they often end up inside bone, where they can clamber onto an internal surface and enter an inactive state.

The cells can snooze for months, sometimes even for many years. They slumber on through successive rounds of chemotherapy, which knocks out cells that are actively dividing but glances over those that do not, regardless of their malignancy. But, inevitably, some of the sleeping cancer cells are roused from their slumber and then begin to divide and grow, forming secondary cancers (metastases) in the bones and the patient relapses, usually fatally.

Tracking down the cancer cells

Seeing that green cancer cell making contact with bone was the culmination of a sustained effort. Since 2010, Phan had been fine-tuning a custom microscope that could do what others could not: make visible the cellular goings-on deep inside living animals.

Phan says, “Traditionally, we microscopists have really struggled to find ways to visualise processes in the body without interfering with what’s being looked at, by removing it from the body, for instance, and preparing it as a microscope slide. One of the biggest challenges is looking deep inside a living animal, and it doesn’t get more ‘inside’ than the internal surfaces of a leg bone.”

The technical challenges were immense, but ultimately Phan was able to devise an elegantly simple microscope setup that revealed living cells inside the bones of anesthetised mice. It was an essential milestone for the research team’s larger ambition to follow individual sleeping cancer cells and gather intel about the triggers that wake them.

But finding sleeping cancer cells is no easy task, and tracking the same cells over time is trickier still. After all, there are millions of cells in our bones and only a few are sleepers. So, how to keep tabs on the right cells?

In the end, the team exploited the very quirk that makes sleeping cells so different from other cancer cells. “The sleepers don’t divide and grow,” says Croucher, “so we added a red dye to multiple myeloma cells before we introduced them to mice. Active cancer cells soon lost their red colour, but the sleeping cells stayed bright red, and easy to locate, for the long haul.”

Like zoologists tracking a pride of lions, the team could now follow a number of individual cancer cells in the bone of living mice, observing their behaviour and their surroundings week by week. This meticulous fieldwork painted a surprisingly messy picture: cells were waking at different times; many weren’t waking at all; and others were even going back to sleep after they’d woken.

As time went on, the researchers started to see method in this apparent madness. McDonald says, “It turns out the cells weren’t in charge of their own slumber. Something outside each cell was giving it a personalised wake-up call. We learned that the sleeping cells were getting caught up in the normal business of the skeleton: the constant building up and breaking down of bone tissue that happens in us all.”

So, if a sleeping cell was positioned beside a cell that specialised in building up bone, the cell’s snooze would go undisturbed. Yet, if it found itself next to a cell that was busy breaking down bone tissue, it was likely to be woken up.

“Watching sleepers over time has given us important clues for new treatment approaches for cancers that spread to bone,” says Croucher. “We now know that tweaking the bone environment around the cells could make a big difference to the progression of the cancer. It could, for instance, keep the cells in hibernation indefinitely – or, more radically, could wake them forcibly so they become vulnerable to chemotherapy.”

Armed with such insights, the team is poised to look more closely than ever at sleeping cancer cells. Besides the basement microscope room, their research is now taking place at Garvan’s other extreme – high on the 11th floor of The Kinghorn Cancer Centre at the new Garvan-Weizmann Centre for Clinical Genomics. And this time, they’ve joined forces with experts from Israel’s Weizmann Institute of Science to uncover new chinks in the armour of sleeping cells.

“Now that we have an understanding of the forces that act on sleeping cancer cells in the skeleton, we’re working to understand more about what goes on inside those cells when they’re sleeping, and as they begin to wake,” says Croucher. He and Phan are working closely with the Weizmann Institute’s Professor Ido Amit and his team to uncover what’s unique about the sleepers. Bolstered by a wide-ranging partnership between the two institutes, their close collaboration is perhaps the most established of many joint Garvan-Weizmann programs.

In the team’s sights is the complex pattern of RNA (ribonucleic acid) molecules produced from each sleeping cell’s DNA, termed its “transcriptome”. Every cell has a unique transcriptome that, importantly, changes over time as the cell’s behaviour changes. This means that sleeping cancer cells will have features in their transcriptome that distinguish them from actively dividing cells in the same cancer, even though they share the same DNA.

Progress has been rapid. “Already, we’ve been able to identify some patterns, or clusters, of RNA molecules that are found together only in the sleepers,” says Croucher. “That means these clusters could act as ‘signatures’ of sleeping cells, helping us to find them in the body.”

“We’re also now following up leads of ‘dormancy genes’,” Phan adds. “These are stretches of DNA that produce RNA only in sleeping cells, and we see them as promising targets for therapy. If we could inactivate them, we could awaken sleeping cells in a controlled way so they could be destroyed by chemotherapy.”

From one green cell on its way to sleep four years ago, to thousands of cells yielding their genetic secrets today, the research has developed apace. “We’re really excited about all that we’ve been able to uncover about sleeping cancer cells since 2013,” Croucher says. “It’s a struggle to conduct game-changing research in that timeframe, but this time we’ve been able to connect the dots and derive new understanding at speed.” There is no sign of slowing, too, with the team now within reach of new cancer treatments, even cures, based on eliminating sleeping cancer cells from our bones. Now that’s something worth waking up to.