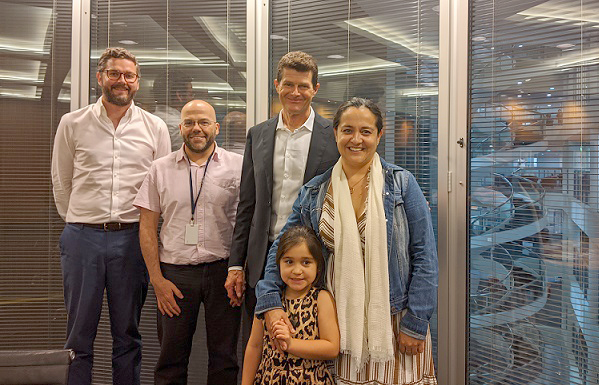 Karla, now six years old, has a rare gene variant that affects an immune ‘checkpoint’ protein, resulting in an imbalance in her immune system that led to childhood onset hepatitis and arthritis. By supplementing her immune system with fortnightly injections of a functioning replacement protein, Karla’s condition has since vastly improved.

The researchers recently published the case in the journal Frontiers in Immunology.

Karla was one year old when she started walking, but a few months later she couldn’t hold herself upright. At only 20 months, she was diagnosed with childhood onset autoimmune hepatitis, which severely affected her liver. Less than two years later, Karla was diagnosed with painful inflammatory arthritis affecting multiple joints.

Karla was initially treated with a series of immunosuppressant drugs including the steroid prednisolone, however these had significant side effects, were often traumatic, and did not relieve her severe joint pain.

“For two to three years, we went through continuous blood tests to try and optimise her medication, but the trial and error was very hard – when Karla’s liver got better, her arthritis would get worse. Often treatments were traumatic, and she didn’t want to go to the doctor,” says Barbara, Karla’s mother.

Karla was referred to the Clinical Immunogenomics Research Consortium Australasia (CIRCA), a multidisciplinary team of researchers and clinicians investigating the causes of rare immune diseases. In 2017, Karla’s genome was sequenced at the Garvan Institute.

“Through whole genome sequencing, we discovered a gene variant in Karla’s CTLA4 gene, which provided a genetic diagnosis to the immune symptoms she was experiencing,” says Garvan’s Executive Director and senior author Professor Chris Goodnow.

CTLA4 is an immune ‘checkpoint’ protein, located on the surface of some immune cells, which controls the extent of the body’s immune responses. The research team discovered the gene variant (Y139C) prevented Karla’s CTLA4 protein from ‘docking’ to its target, causing her immune system to go unchecked and attack her joints and liver.

“Karla was unlucky to inherit this rare genetic change, but also fortunate that it pointed directly to a treatment. This is what personalised medicine is all about, and there are many others like Karla who stand to benefit from genetic testing,” explains lead author Dr Owen Siggs, who made Karla’s genetic diagnosis at the Garvan Institute.

Based on her genetic diagnosis, Karla’s treatment was altered by adding abatacept – a synthetic form of the CTLA4 protein that is already used clinically for the treatment of adult rheumatoid arthritis.

“Without the genetic analysis, Karla might not have received this life-changing treatment. Since abatacept does not yield such an exceptional response in most children with arthritis, it is not available under the Pharmaceuticals Benefit Scheme (PBS),” says Professor Goodnow. “The challenge we are now pursuing is to use genomics to identify all children or adults who will respond exceptionally well, like Karla, to this targeted treatment.”

“Using genomics, we are already personalising treatments to individuals. We hope that in future our findings will allow abatacept to be listed under the PBS for those who can benefit from it,” he adds.

“The CIRCA team connected us with physicians caring for other children like Karla around the world, providing advice on tailored dosing that proved critical to getting Karla’s arthritis under control,” explains pediatric rheumatologist Dr Davinder Singh-Grewal, who treated Karla’s arthritis at The Children’s Hospital at Westmead.

Two years after her diagnosis, Karla is doing well and her arthritis has been in remission for over 12 months.

“I see a huge difference,” says Barbara. “Before, Karla used to limp a lot because her joints were sore – that’s what she was used to, the pain, and it was constant. Now she doesn’t have the pain, so when it’s about time for her next dosage, or if she hits her arm by accident, she tells me because she knows what the difference is.”

This project was funded by the National Health and Medical Research Council and the John Brown Cook Foundation. Professor Goodnow holds The Bill and Patricia Ritchie Foundation Chair.

Notes to the editor:

CIRCA is a national, Garvan-led collaboration of medical and scientific professionals that investigates the genetic causes of rare immune diseases. CIRCA’s mission is to understand the genetic causes of immunological diseases in individual patients and to use these findings to help improve outcomes for the patient, their families and other individuals with similar immune diseases.

This story was covered by the ABC.