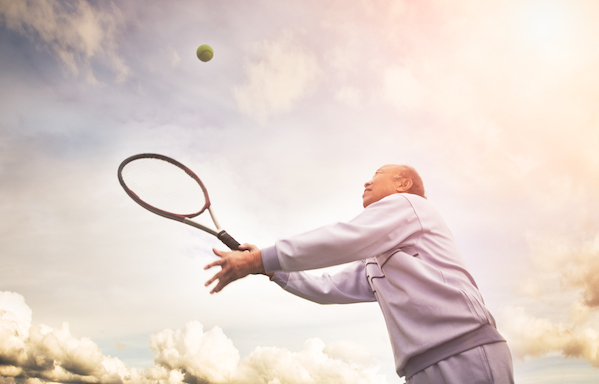 Within our genome, each of us harbours millions of genetic variants – sites in our DNA sequence where we differ from others. A key challenge in genomic research is to work out which of those millions of variants act as drivers of disease, and which do not.

Because it includes only the genomes of individuals over the age of 70 who have no history of major disease (cardiovascular disease, neurodegenerative disease or cancer), the Reference Bank is expected to be relatively free of genetic variants associated with disease – making it a powerful filter, or ‘control’, for accelerating genomic discovery in medical research. In addition, it will aid in the diagnosis of genetic disease and may shed light on mechanisms of healthy aging.

The NSW Minister of Health, the Hon. Jillian Skinner, announced the launch of the Medical Genome Reference Bank – including an online data portal and the first 1200 genome sequences – at the Second Sydney Genomics Collaborative Symposium, hosted by Garvan.

The NSW Government is proud to be investing in innovative programs that place NSW at the forefront of modern medicine. The Government’s $24 million Sydney Genomics Collaborative is advancing cutting edge research in genomics and genomic medicine for the benefit of patients and families from NSW and across Australia,” Mrs Skinner said.

Today’s launch has been timed to give researchers rapid access to the first set of 1200 genomes in the Medical Genome Reference Bank, through the new data portal, available at sgc.garvan.org.au. The number of genomes in the Reference Bank will increase from 1200 to 4000 during 2017, making it the largest single Australian genomic cohort.

The development of the Medical Genome Reference Bank has been funded by NSW Health, through the Office of Health and Medical Research.  It is one of three major projects within the Sydney Genomics Collaborative – a $24 million, 4-year program to boost genomic research across NSW, in order to shed light on the genetic basis of inherited diseases and on disorders with a genetic component, including cancer.

“We are particularly proud of the Medical Genome Reference Bank because it turns the notion of a genomic cohort on its head. Most genomic cohorts focus on individuals with a medical condition – but in the Reference Bank, every participant is healthy, and has been for seven decades or longer,” said A/Prof Dinger.

“That makes the Reference Bank an important comparison cohort that will help researchers across the world to more easily identify variations in the genomes of others that contribute to disease. Through the NSW Genomics Collaborative Grants, another project of the Sydney Genomics Collaborative, we are already seeing a wide variety of disease cohorts sequenced – and the Reference Bank will be critical in making maximum sense of these studies.

“The Medical Genome Reference Bank is an ongoing collaboration between a diverse group of Australian entities, each bringing their own strengths to the table – from the computational power provided by the National Computational Infrastructure (NCI), to the cohort owners, who bring samples with detailed clinical histories.

“We encourage genomics researchers to access the new data portal and explore the data that’s there.”

The Medical Genome Reference Bank project is led by the Kinghorn Centre for Clinical Genomics at Garvan, while NCI provides the essential computing power for the analysis and storage of the genomes.

The genome sequences in the Reference Bank are sourced from participants in two leading Australian research studies in older people: the ASPREE (ASPirin in Reducing Events in the Elderly) study (Monash University, Melbourne) and the 45 and Up study (Sax Institute, Sydney). Both studies contributed non-identifiable samples from 2000 individuals.

Professor David Thomas (Director, The Kinghorn Cancer Centre and Head of Garvan’s Cancer Division) co-leads the Medical Genome Reference Bank project with A/Prof Dinger. He said, “The Reference Bank will not only shed light on the genetic basis of disease, but will help us understand the genetics of healthy ageing. With an ageing population, understanding why some people live longer and healthier lives than others will be increasingly important.”

About the Garvan Institute of Medical Research

The Garvan Institute of Medical Research is one of Australia's largest medical research institutions and is at the forefront of next-generation genomic sequencing in Australia. Garvan’s main research areas are: cancer, diabetes and metabolism, immunology and inflammation, osteoporosis and bone biology, and neuroscience. Garvan’s mission is to make significant contributions to medical science that will change the directions of science and medicine and have major impacts on human health. In 2012, Garvan established Australia’s first purpose‐built facility for undertaking clinical-grade genome sequencing and large-scale research projects. The Kinghorn Centre for Clinical Genomics (KCCG) researchers undertake collaborative projects and genome‐based studies to improve genome interpretation, with the aim of advancing the use of genomic information in patient care.

About the Sydney Genomics Collaborative

The Sydney Genomics Collaborative Program is a $24 million, 4-year program funded by NSW Health to boost genomic research across NSW, in order to shed light on the genetic basis of inherited diseases and on disorders with a genetic component, including cancer.

The Sydney Genomics Collaborative program was established in June 2014 to boost genomic research across NSW into inherited diseases and disorders with a genetic component, including cancer.

(2) NSW Genomics Collaborative Grants – funding for researchers to undertake whole-genome sequencing to improve understanding of the genetic causes of disease.

(3) Genomic Cancer Medicine Program – a research program dedicated to applying genomics to the understanding, early detection, prevention and management of cancer, led by the Head of Garvan’s Cancer Division and Director of The Kinghorn Cancer Centre, Professor David Thomas.

About the ASPREE study

The ASPREE study (ASPirin in Reducing Events in the Elderly) is an international clinical trial to determine whether daily low-dose (100 mg) aspirin improves quality of life for older people around the world. The randomised, double blind, placebo-controlled study for primary prevention of cardiovascular disease, dementia, depression and some cancers is being undertaken in 19,000 participants in Australia and the USA.

Led by Monash University in Australia and the Berman Centre for Outcomes and Clinical Research in the USA, the trial uses a composite outcome of years of life free from physical and cognitive disability. More than 16,700 older people aged 70 plus, living in south eastern Australia enrolled in the ASPREE study (2,411 in the US).

About the 45 and Up Study

The 45 and Up Study (Sax Institute, Sydney) is the largest ongoing study of healthy aging in the southern hemisphere, involving more than a quarter of a million Australians. It is a major research tool being used by both researchers and policy makers to better understand how Australians are ageing and using health services, how to prevent and manage ill-health and disability and how this can guide decisions on our health system.

Our genome is the complete set of genetic information we inherit from our parents, encoded within 2 metres of DNA packed tightly into each of our cells as chromosomes. A human genome is approximately 6 billion base pairs, or letters of DNA code.

Genomics is the study of the structure and function of the genome of an organism.

3. What is DNA sequencing?

The DNA sequence is a series of letters – As, Cs, Gs, and Ts – that represent the order of base pairs in a person’s DNA. The sequence of a single human genome has approximately 6,000 million letters to read and interpret. In a sequencing laboratory, machines break the DNA up into manageable segments and read the order of the DNA bases or letters. Computers are then used to compare the DNA sequence with other sequences to locate the differences or variants.

4. What is a genomic cohort?

A cohort is a group of people who share one or more important characteristics. It could be that they have a particular genetic disorder, or in the case of the MGRB cohort that they are over 70 years old and healthy. Cohort studies usually focus on a group over time and help researchers learn about how a range of factors affect health and disease. In a genomic cohort, the genome of each individual is sequenced in order to compare it with others, both within in the cohort and beyond.

5. How does the Medical Genome Reference Bank differ from other genomic cohorts?

As a publicly available genomic cohort that has been designed to be depleted of disease, the Medical Genome Reference Bank is the one of the first of its kind in the world. Once complete, with 4000 whole genomes, it will also be the largest single Australian genomic cohort.

A key challenge of interpretation in whole genome sequencing is understanding which of an individual’s 3.2 million variants cause disease, adverse drug reactions, or are benign (causal vs. passenger variation). One of the most valuable filters to distinguish between disease-and non-disease-causing variants is the frequency of the variant in a healthy, aged population who carry fewer genetic drivers of disease.

The Medical Genome Reference will act as this filter, or negative control group, as each participant is healthy. It will facilitate accurate diagnosis and discovery of genetic variants underpinning disease, will serve to significantly expedite the process of genomic discovery and could also provide insight into the genetics of healthy aging.

7. What is the Medical Genome Reference Bank data portal?

The Medical Genome Reference Bank (accessed at sgc.garvan.org.au) is the point of access to genomic and other information in the Reference Bank. Through the portal, curated data will be openly accessible to the Australian and international research community. Within the 1200 genomes that are being made available today, users can search for genes, co-ordinates and disease areas (e.g. ovarian cancer). Preliminary features will include access to statistical summary data (genomic and phenotypic) and simple queries (e.g. allelic frequency).

The governance framework employed at the MGRB is in line with the best in the world, aiming to enable access for researchers while maintaining privacy for individuals in the cohort.

There are three tiers of access to the MGRB data. The first is making queries through the online data portal, which provides summary data only. The second tier of access, which will be implemented in March 2017, will permit access to all of the genomic data from the portal, along with basic clinical information including gender, height, weight and age. A third tier which will enable access to deeper phenotypical information through the participating cohort, will be launched in parallel. Researchers must apply for tier two and three access. Their applications will be considered by a data access review board.