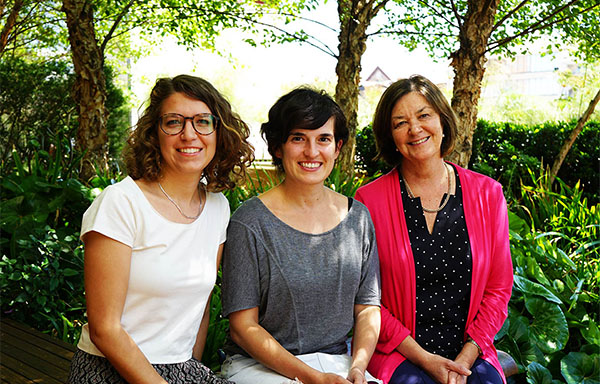 In a study published in Nature Communications, researchers at the Garvan Institute of Medical Research have uncovered a new layer of epigenetic regulation of gene activity in prostate cancer.

They discovered that chemical ‘tagging’ of a unique DNA-packaging protein, ‘H2A.Z,’ at specific DNA regions is associated with the activation of many genes that promote cancer cell growth. Furthermore, they found evidence that tagging of H2A.Z could be important in the clinic: men with prostate cancer survived longer if they had lower levels of tagged H2A.Z in their tumours.

Prostate cancer is the most commonly diagnosed cancer in men, with approximately 17,000 new cases diagnosed annually in Australia. Over 3000 men lose their lives to the disease each year. *

The precise causes of prostate cancer, and why genes in prostate cancer cells act so erratically, are still not fully understood. In this study, led by Professor Susan Clark and Dr Fatima Valdes Mora of Garvan’s Genomics and Epigenetics Division, the researchers suspected that ‘histones’ – proteins that package DNA in the nucleus of every cell – might be playing a key role.

“Our DNA is like long strands of string, wrapped around beads – and the ‘beads’ are histone proteins. Histones allow DNA to be tightly coiled and organised in the cell nucleus, and for a long time that was thought to be their main purpose. But we now know that they do a lot more than just provide structural packaging – the histones themselves interact with DNA and can determine whether genes are turned on or off,” Dr Valdes Mora says.

There are five different families of histone proteins, and many variations within those families. Histone variant H2A.Z has been linked to a number of cancers, but researchers don’t yet understand exactly how it contributes to cancer cell activity.

Dr Valdes Mora says, “In our investigation, we first found that a chemical modification or tagging, called ‘acetylation,’ of H2A.Z was prominent in prostate cancer cells.

“The presence of this modified H2A.Z – which we termed ‘H2A.Zac’ – promoted the growth of prostate cancer cells.”

When they compared prostate cancer cells to normal prostate cells, the researchers discovered that at specific regions of DNA in the cancer cells, there was more H2A.Zac present than in the normal cells.

Prof Clark, Head of the Genomics and Epigenetics Division, explains, “These short regions of DNA where we found more H2A.Zac packaged are called ‘enhancers,’ as they cause genes to be turned on – they enhance gene expression.

“On long ‘strings’ of DNA, the enhancer regions are often a long way down the string from the genes they affect. However, depending on how tightly the DNA is coiled around the histone ‘beads’, enhancers and genes could be brought closer together.

“We suspected that in the cancer cells, H2AZ.ac was responsible for altering these long, distant enhancer-gene interactions.”

The researchers showed that in prostate cancer cells the presence of H2A.Zac, as opposed to non-tagged H2A.Z, at enhancers resulted in the tightly packed DNA opening up, bringing together enhancers and genes that otherwise would not interact. This re-arranging also led to further epigenetic changes to the DNA itself.

“Together, these epigenetic changes caused many genes, particularly cancer-related genes, or oncogenes, to be turned on in prostate cancer cells,” says Prof Clark.

“We then looked at H2A.Zac in clinical samples, and found that men whose prostate tumours had high levels of H2A.Zac had lower survival rates after three years.”

“Our work provides a deeper level of understanding of what drives prostate cancer progression – and in particular the exquisite role of H2A.Z and its acetylation in deregulated gene activation,” continues Prof Clark.

Histone acetylation is one of a range of chemical changes to DNA or its structural proteins that result in altered gene activity. Epigenetics, the study of these changes, provides another level of information in addition to the DNA sequence itself.

“While understanding the genetic changes in cancer cells is extremely important, deciphering this extra layer of epigenetic information is vital if we are to fully comprehend the complexity of gene control and how it is disrupted in cancer,” Prof Clark says.

“These findings take us one step closer to this goal.”