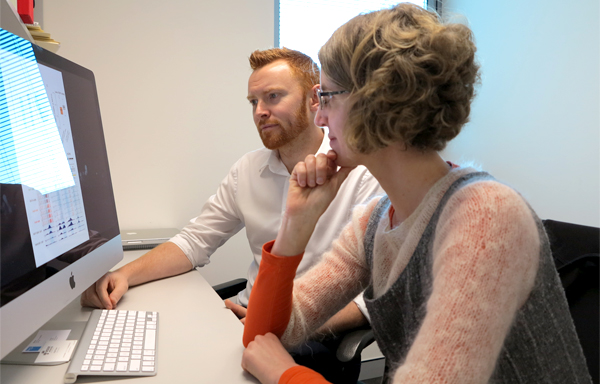 A breast cancer story that began with the insightful deductions of a Scottish surgeon during the 1870s is much closer to its denouement thanks to findings by Australian scientists.

Dr Andrew Stone, Dr Elena Zotenko and Professor Susan Clark, from Sydney’s Garvan Institute, have demonstrated that highly targeted ‘epigenetic’ changes, or biochemical modifications, take place in specific regions of the genome as an oestrogen-dependent cancer loses its dependence on the hormone.

DNA ‘hypermethylation’ – attachment of many methyl groups – on ‘oestrogen enhancer’ regions of the genome indicates a cancer that is no longer dependent on oestrogen, and so no longer responsive to therapy.

The story about the hormone oestrogen, and the fact it drives many breast cancers, has taken over a hundred years to unfold, involving many invisible elements that have gradually been revealed over time.

Scottish physician, Dr George Beatson, performed a feat of deductive reasoning when in 1876 he linked his experience of treating breast cancer patients and his considerable knowledge of lactating animals with his discovery of the fact that, in many parts of the world, farmers remove the ovaries of cattle so that they will produce milk indefinitely.

Seeing that there was an unknown link between ovaries and breasts, and that it may impact cancer1, Beatson removed the ovaries of three women with inoperable breast cancer to see if that would arrest their disease.

The tumours shrank dramatically, but the effect remained a mystery because the hormone oestrogen – produced by ovaries – would not be discovered for another 50 years.

Surgeons in London tried to repeat Beatson’s success in larger groups of breast cancer patients, but found that only two-thirds responded well to ovary removal.

The reason for this partial success would not become clear until 19732, thanks partly to a discovery by Chicago chemist Elwood Jenson in the late 1960s. Jenson found the ‘oestrogen receptor’, the molecule to which oestrogen attaches and relays signals to the cell. Elwood also established that some tumours express the receptor, while some do not.

The discovery in the early 1970s that the drug tamoxifen blocks the oestrogen receptor and stops the spread of oestrogen-driven breast cancers has prolonged the lives of millions. Unfortunately, around 25% of those who initially respond well to tamoxifen, and other ‘endocrine’ therapies that block oestrogen, eventually develop resistance to drugs and their cancer spreads to other organs.

“The mechanisms that lead to resistance are still not well understood, so we embarked on a genome-wide study to see whether there was a common mechanism for endocrine resistance in oestrogen receptor positive breast cancer,” said Professor Susan Clark.

Clark’s laboratory collaborated with colleagues at Cardiff University in Wales, who had developed three ‘cell lines’ that were each resistant to a different endocrine therapy.

“What Elena found surprised us all. When she looked genome-wide, she observed significantly increased methylation in regulatory regions or enhancer regions of the genome where the oestrogen receptor binds to DNA and controls oestrogen regulated genes.”

Dr Zotenko proceeded to examine data from The Cancer Genome Atlas, a US initiative which stores information – methylation profiling and RNA sequencing – about thousands of clinical samples, including breast cancer.

“You can use these public datasets to enrich your understanding of what you see in your data,” said Dr Zotenko, “and we could see clearly that hypermethylation of our oestrogen receptor bound enhancers resulted in downregulation of corresponding genes.”

“Our results show that the patients, who initially respond well to tamoxifen and other endocrine therapies, eventually develop resistance to drugs because of a gain of methylation of the oestrogen responsive enhancers,” said Dr Andrew Stone.

“We believe there is now the potential to screen oestrogen receptor positive breast cancer patients and predict how they will respond to endocrine therapy.”

The study is a ‘proof of principle’, and the research team will now investigate larger cohorts of patients.

1. In his classic paper, ‘Inoperable Cases of Carcinoma of the Mamma’, published in The Lancet of 11 July 1896, Dr Beatson wrote:

“I often asked myself, Is cancer of the mamma due to some ovarian irritation, as from some defective steps in the cycle of ovarian changes; and if so, would the cell proliferation be brought to a standstill, or would the cells go to the fatty degeneration seen in lactation were the ovaries to be removed?”

Rather than stimulating the production of oestrogen, the pill had the opposite effect, and was abandoned by ICI as a useless product.

Walpole did not abandon the project, however, and began to see the drug as a potential therapy against oestrogen-driven breast cancers. He found a clinical collaborator in Mary Cole, a Manchester oncologist and radiotherapist with a particular interest in breast cancer.

A trial was launched in the late summer of 1969. Forty-six women with breast cancer were treated with tablets of ICI 46474. In 10 patients, the response was immediate and obvious. Breast tumors shriveled visibly, lung metastases shrank, bone pain reduced and lymph nodes softened.

In 1973, the answer to Beatson’s riddle would finally become obvious when V Craig Jordan, a chemist working at the Worcester Foundation in Massachusetts investigated which cancers did, and which did not, respond to tamoxifen therapy.