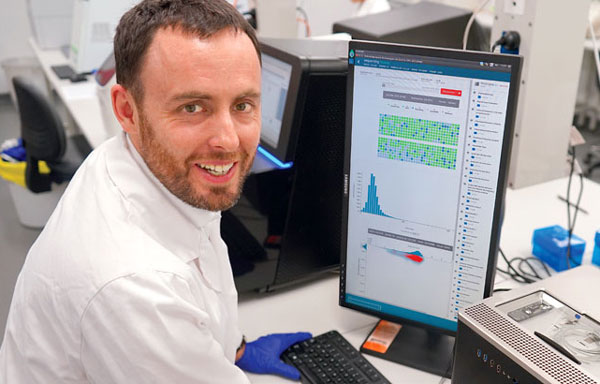 Dr Martin Smith (right), Genomic Technologies Program Leader at Garvan’s Kinghorn Centre for Clinical Genomics, and his team have honed the use of Oxford Nanopore Technologies’ MinION and GridION sequencers. Garvan was only the second organisation in the world to achieve certification to provide nanopore sequencing as a service.

The technology works by driving DNA or RNA molecules through thousands of tiny tubes, called nanopores, that sit in a membrane. As the molecules move through a nanopore, each base (or letter in the genetic sequence) disrupts the electric current. These disruptions are recorded to determine the sequence. Researchers can process samples and start analysing the sequences in as little as 15 minutes.

The real power of nanopore sequencing lies in its ‘long-read’ capabilities. It can read thousands upon thousands of DNA letters (or bases) from a single molecule of DNA, setting it apart from most other genome sequencing technologies that read relatively short stretches of DNA then reassemble the sequences computationally. Late last year, Martin’s team achieved the milestone for the first genome sequencing read over one million bases in a single DNA molecule.

Long-read sequencing is particularly powerful in cancer. As a cell progresses to being cancerous, it acquires a host of changes to its genome, such as structural rearrangements – which involve the relocation of stretches of DNA from one part of the genome to another. These changes are readily assessed with this technology.

Professor Vanessa Hayes, who leads Garvan’s Human Comparative and Prostate Cancer Genomics lab, studies how large-scale DNA changes impact prostate cancer. “We know prostate cancer is likely to be driven by complex rearrangements of DNA – when a gene has been deleted, transferred to another chromosome or multiplied many times,” she says. “Being able to attain long reads on prostate cancer genomes is a game changer.”

Nanopore sequencing can even pick up chemical changes to DNA and RNA – which are collectively known as epigenetic marks. “This technology is going to transform research into RNA biology,” says Dr Smith. “RNA has over 200 known modifications, and we have little idea of how these modifications are involved in biology and disease. If we can read the epigenetic marks on RNA directly, we’ll be in a far better position to make sense of what they’re doing in the cell.”

Researchers at Garvan and beyond now have access to both short-read and long-read genome sequencing, which are complementary. Dr Smith and his team will seek to improve capacity to process samples more quickly, cost-effectively and accurately. “The clinical implications could one day be enormous,” Dr Smith says. “If a patient’s dying because of an infection, and a clinician can identify the pathogen quickly and accurately, you could save a life.”