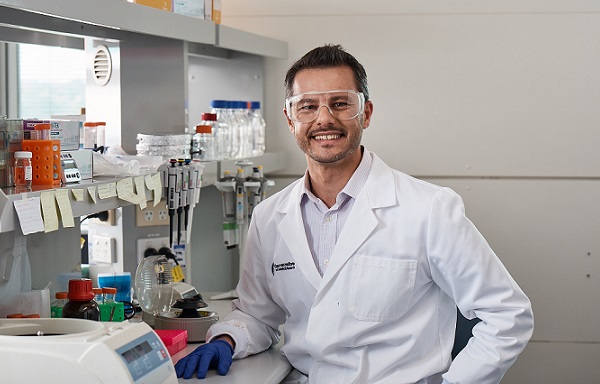 New research led by the Garvan Institute of Medical Research has revealed how breast cancer cells that develop during or after pregnancy change their environment to form more aggressive tumours.

In experimental models of pregnancy-associated breast cancer, researchers found that cancer cells send signals to the connective tissue around them to trigger uncontrolled inflammation and remodel the tissue, which in turn helps the cancer to spread.

“Breast cancers that arise during or shortly after pregnancy are highly aggressive as they often become resistant to standard therapies. With 50% of cases being fatal, better treatment options are urgently needed,” says Dr David Gallego-Ortega, Leader of the Tumour Development Group at Garvan and co-senior author of the new study published in Cell Reports.

“Our study has revealed a crosstalk between these breast cancer cells and their environment that is fuelling the right conditions for cancer to metastasise, and reveals the inflammation itself as a potential new therapeutic target for the disease.”

While a breast cancer diagnosis is devastating for any patient, the prognosis is far worse for pregnant women and new mothers. One in every two women diagnosed with pregnancy-associated breast cancer, which affects up to 40 of every 100,000 women giving birth, will lose their battle within five years of diagnosis.

“Breast cancer survival rates reduce from 80% to just 52% for young mothers who develop breast cancer while pregnant,” says co-first author Dr Fatima Valdes-Mora from the Children’s Cancer Institute, who conducted the research at the Garvan Institute.

“We set out to understand the cellular basis of how pregnancy triggers a more aggressive breast cancer and how current treatment could be improved.”

Using next-generation cellular genomics technology, the researchers analysed a snapshot of gene activity of the individual cells found within the tumours of an experimental model of pregnancy-associated breast cancer. Interestingly, the researchers observed a number of changes not just in the cancer cells themselves, but in the surrounding connective tissue cells.

An environment for cancer to thrive

“In normal breast tissue cells, when mothers stop breastfeeding, changes in hormonal signals tell the connective tissue around milk-producing cells to revert to its pre-pregnancy form. But we found when similar signals were sent by breast cancer cells, they triggered changes that enabled inflammation and faster cancer spread,” says Dr Gallego-Ortega.

“The genomic data showed us that as they received pregnancy cues, breast cancer cells transitioned to the more malignant ‘basal’ breast cancer subtype. At the same time, the cells were ‘tweaking’ their environment, signalling to cells around them to turn on inflammation within the tumour tissue.”

In their model, the researchers found that cells in the tumour environment drove changes that make pregnancy-associated breast cancer highly aggressive – uncontrolled inflammation, tissue remodelling and the generation of new blood vessels.

The findings have prompted the researchers to explore new therapeutic targets for pregnancy-associated breast cancer. In experimental models, the team is next aiming to test whether treating the inflammatory pathways in the tumour environment – some of which can be targeted with existing medication such as ibuprofen – could reduce the spread of pregnancy-associated breast cancers and improve outcomes of current treatments.

“Pregnancy can provide cancers with a route of escape from therapy and from their location in the breast,” explains Prof Chris Ormandy, co-senior author and Head of the Cancer Biology Lab at Garvan. “Our study suggests that targeting inflammation is one way to stay a step ahead of the disease.”