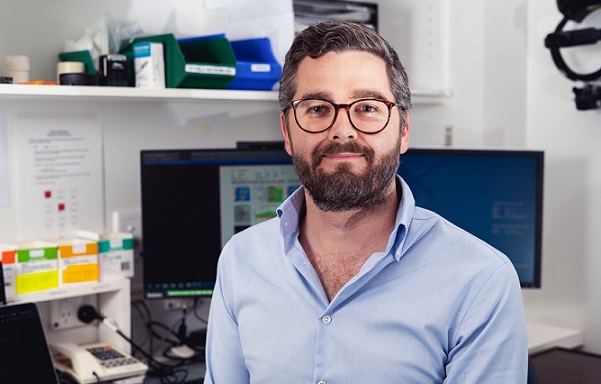 This significant $8 million Snow Medical Fellowship provided by Terry Snow and his family will support Dr Owen Siggs to carry out pioneering inflammatory disease research, which he will commence at the Garvan Institute of Medical Research in 2021.

“This crucial support from the Snow Medical Research Foundation is a game changer,” Dr Siggs said.

“Never before have we been in a position to analyse genomic data from both large populations and individual patients and cells in such detail. I’m very excited to be tackling this important question, with resources that an Australian early career researcher could only dream of.

“The aims of my research are to improve diagnosis and treatment of autoimmune and inflammatory diseases, which affect over 10% of the population and include conditions such as rheumatoid arthritis, multiple sclerosis and Sjögren's syndrome. Most of these diseases have no cure and require lifelong treatment.”

Dr Siggs will also investigate acquired genetic changes that are linked to an increased risk of atherosclerotic cardiovascular disease: the leading cause of mortality worldwide. As part of his eight-year Snow Fellowship at the Garvan Institute, Dr Siggs will investigate inflammatory disease at the level of populations, patients, and individual cells. He proposes that acquired genetic changes can drive autoimmune and inflammatory conditions and finding these genetic changes could help improve their diagnosis and treatment, bringing new hope to those affected.

His team will use high-performance computing to analyse the genomes of thousands of individuals with autoimmune and inflammatory conditions to identify acquired genetic changes linked to disease.

Further, the researchers will isolate individual cells from Australian patients with inflammatory disease, recruited through networks such as the Hope Research program, and use cutting-edge single cell techniques developed at the Garvan Instituteto investigate how acquired genetic changes lead to disease. Finally, the team will test these genetic changes in experimental models to identify ways to target the damaging immune cells which harbour them.

While this research will help provide an in-depth understanding of some of the most common inflammatory conditions, identifying these disease-causing immune cells opens the possibility of eliminating them altogether; offering potential cures for otherwise incurable conditions.

The Chair of the Snow Medical Research Foundation, Tom Snow, has congratulated Dr Siggs and the other two inaugural Snow Fellowship recipients.

‘’This is an investment in Australia’s future. Terry and the Snow family are committed to giving outstanding researchers the independence to focus on their research. Owen has already had a stellar early career with some of the greatest mentors including in the laboratory of Nobel laureate Bruce Beutler, and as an early career researcher, is positioned to provide a significant contribution to his field,’’ Mr Snow Said.

‘’Owen has a powerful combination of skills in genome computation, genetics, immunology and clinical medicine. His focus on the effect of lifetime acquired mutations on autoimmune and inflammatory diseases is ambitious, and we are excited to support this emerging area of multidisciplinary science.

“We believe that Owen has an exceptional ability to combine his research, training, impressive international networks and the outstanding environment and mentorship provided by the Garvan Institute to achieve a significant impact in the field.

“With financial backing, these scientists like Owen will produce paradigm-shifting research that wouldn’t otherwise be possible.”

Professor Chris Goodnow, Executive Director of the Garvan Institute, says: “The Institute is extremely fortunate to be recruiting Owen, ahead of other stellar research institutes outside Australia. Having collaborated with him personally for many years, I know the lengths of research talent first-hand. I look forward to the life-changing research he will help drive at Garvan.

“I want to thank Terry Snow and his family for their vision and generosity in establishing the Snow Fellowships. The program is unique in Australia – in its focus on providing significant research funding, – over an extended timeframe – to the pinnacle of our young researchers’ careers.

“It targets our best and brightest at an emergent stage of their careers with the security and independence to be bold and to follow their vision. It positions them to have global impact from an Australian base.”

Dr Owen Siggs is an early-career clinician-scientist and an inaugural Snow Fellow, with a career focus on the clinical impact of germline and somatic genetic variation.

Owen trained in science and clinical medicine in Adelaide, in immunology and genomics at the John Curtin School of Medical Research with Professor Chris Goodnow, as a General Sir John Monash Scholar at The Scripps Research Institute in California with Nobel Laureate Professor Bruce Beutler, and at the University of Oxford with the Nuffield Professor of Medicine Richard Cornall. He was then a Sir Henry Wellcome Postdoctoral Fellow at The Wellcome Trust Sanger Institute and a Junior Research Fellow at the University of Cambridge, and a Visiting Fellow at the Broad Institute of MIT and Harvard.

His research career has spanned the use of large-scale genome-wide mutagenesis to discover the function of genes essential for immunity, to the use of exome and genome sequencing to diagnose severe inherited diseases. His current interests include the use of large-scale population and single cell genomics to understand the clinical impact of germline and somatic genetic variation, and the application of this information in clinical practice.

About the Garvan Institute of Medical Research

The Garvan Institute of Medical Research brings together world leading researchers and clinicians. We are patient focused. Our researchers break down the barriers between traditional scientific disciplines to find solutions to disease. Our mission is to harness all the information encoded in our genome to better diagnose, treat, predict and prevent disease. Garvan’s research has global impact. Our scientists pioneer discoveries across four intersecting research themes. We lead the field in medical genomics, epigenetics, and cellular genomics; cancer; diseases of immunity and inflammation; and diseases of ageing affecting bone, brain and metabolism.

The newly established Snow Medical Research Foundation (Snow Medical), is the creation of Canberra’s Snow family and is a vision of businessman and philanthropist, Terry Snow. Snow Medical’s pivotal program, the Snow Fellowships, targets emerging global research leaders that show the potential to drive, manage and influence the next generation of health and medical innovation. The eight year Snow Fellowship, funded at up to $1 million per year,  provides outstanding biomedical researchers the independence to focus on building ambitious multidisciplinary research programs and teams capable of changing the face of healthcare in Australia and globally.

Terry Snow is the founder of Snow Medical, the Executive Chairman of Canberra Airport as well as owner of Willinga Park.  In 2006, Terry was awarded an Order of Australia for his contribution to the city of Canberra, as well as for his charitable work through the Snow Foundation. In October 2009 Terry was announced as the inaugural recipient of the Canberra Business Council’s Chairman’s Award for his significant individual contribution to the economic development of Canberra and the capital region.

Tom Snow is Chair of the Snow Medical board and was a founder and Co-Chair of the Equality Campaign, which led and won the successful YES postal plebiscite on marriage equality. He is a former Rhodes Scholar with a Masters degree in Economics and Bachelor degrees in Science and Economics (Actuarial Studies).

He is a founder of Whitehelm Capital, one of the world’s largest independent infrastructure managers with $6 billion in assets under management. As a Fellow of the Australian Institute of Company Directors, he has had roles including director of Perth Airport, Canberra Airport, Bankstown Airport, Port of Adelaide / Flinders Ports, Etihad Stadium, Peninsula Link, International Parking Group and Whitehelm Capital. Tom Snow was born and raised in Canberra and has served as chair of the Canberra Convention Bureau, chair of Equality Australia, director of the Australian Science Festival and director of the Rhodes Scholarships in Australia. He is also a proud father of three kids.