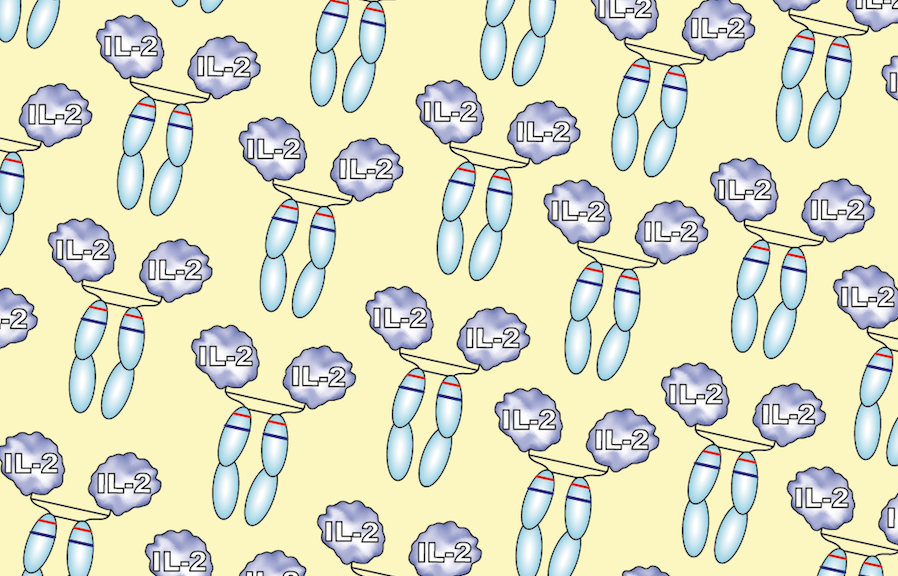 In the ongoing quest for game-changing cancer treatments, molecules are often identified that successfully attack cancer cells – but have other unfavourable attributes that limit their use as therapies.

One such molecule is interleukin-2 (or IL-2), which helps the immune system to attack tumours. IL-2 has been in clinical use for decades, and has been called ‘the first effective cancer immunotherapy’ – but is so toxic that it is currently only prescribed in a very limited number of late-stage cancers.

A team from the Garvan Institute of Medical Research has been exploring how to reduce IL-2’s toxic side-effects – and in the process, has overturned established thinking about how best to strengthen IL-2’s action against cancer. Their findings were recently published in Nature Communications.

Associate Professor Daniel Christ, who led the research, says that IL-2’s potential to be a better anticancer therapy was tantalising.

“IL-2 is just one example of a huge back-catalogue of cancer treatments that are worth revisiting, in an effort to make them more useful in the clinic.

“We are currently witnessing an explosion in new immunotherapies for cancer, such as the immune checkpoint inhibitors – and this has really reinvigorated huge interest in early immunotherapies, such as IL-2, that can support the immune system to attack cancer.

“Importantly, we’re seeing that immunotherapies tend to work better in combination – so one reason we wanted to investigate IL-2 again was because it could be a good candidate for use in combination therapy with newer treatments.”

In the current study – which was carried out in vitro and in mice – the research team set out to make a range of different versions of IL-2.

“We wanted to make it more powerful as an antitumour agent, and we also wanted to extend its half-life in the body – because IL-2 is removed from the blood so rapidly that this limits its use as a therapy.

“We reasoned that, by doing both things, we had a good chance of developing a more effective and less toxic version.”

IL-2 acts against cancer by instructing immune cells on how to behave towards a tumour. In particular, IL-2 activates ‘killer cells’, such as killer T cells and natural killer cells, stimulating them to attack tumours.

In an effort to make IL-2 more active against tumours, the researchers attached IL-2 to an antibody fragment (Fc fragment) to generate longer-lived molecules. Then, they modified the IL-2 portion of IL-2-Fc to obtain a protein that was extremely potent at expanding killer cells – much more so than ‘normal’ IL-2-Fc.

Next, they tested the antitumour activity of the different versions – and the results came as a surprise.

Dr Vazquez-Lombardi says, “We knew that the activation of killer cells is what makes IL-2 such a powerful anticancer agent – so, on paper, it seemed clear that the IL-2-Fc version with increased killer cell expansion would be even better at attacking tumours.

“But what we found was completely different. Once the Fc fragment had been added, it was the ‘normal’ IL-2-Fc that was the more powerful anticancer agent – and not the version that activated killer cells more strongly.”

When the researchers looked more closely, they found that the addition of the Fc fragment was changing the behaviour of IL-2, and helping it to reduce the numbers of a different class of immune cell – the regulatory T cells. Crucially, depletion of regulatory T cells required the intact IL-2 component of ‘normal’ IL-2-Fc.

“This is a real paradigm shift for IL-2,” says A/Prof Christ.

“Quite unlike killer cells, regulatory T cells tend to dampen immune responses against a tumour – so, by reducing the number of these cells, the IL-2-Fc molecule is helping to overcome the immune system’s ‘reluctance’ to attack cancer.

“In effect, the IL-2-Fc protein is releasing a brake on the immune system, and giving it the green light to attack cancer. It’s still pressing down the accelerator too (by activating killer cells) – but our findings suggest that it’s the release of the brake that is the dominant factor in how it works.”

The researchers say their findings will change thinking about IL-2, and provide important guidance for the development of future IL-2-based therapies.

Prof Sprent points out, “Clinicians have become wary of IL-2 therapy for cancer because it’s a double-edged sword: the benefits of boosting killer cell function are countered by the parallel stimulation of T regulatory cells.

“Our simple trick of selectively stimulating just the killer cells and not the T regulatory cells is a real breakthrough and should restore faith in IL-2 therapy.”