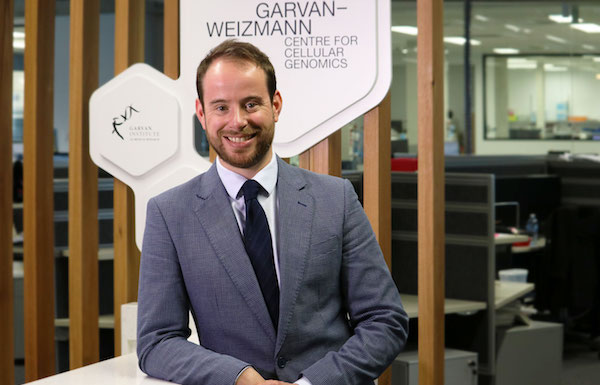 A/Prof Powell arrived at Garvan in April, bringing a wealth of expertise in single-cell technologies and the computational and mathematical methods underpinning analysis of the genomic data. His most recent role was at the Institute of Molecular Biosciences (University of Queensland), where he led a group that pioneered single-cell sequencing and sequenced the genetic output of more than 2 million individual cells.

"We can do things that have […] wide-ranging effects on people globally. Not just within the Australian healthcare system, but internationally."

On the first anniversary of the Garvan-Weizmann Centre’s opening, we spoke with A/Prof Powell about his vision for the Centre, his own research philosophy and passion, and the power of cellular genomics to make sense of disease.

"Our goal is to increase our chances of solving a disease, managing it, reducing the years of the disability. And that can impact on hundreds of thousands of people."

This year, you’ve become the inaugural Head of the Garvan-Weizmann Centre for Cellular Genomics. Why this role, and why now?

I wanted to work in an institute that is significantly focused on genomic research and genomic translation. Garvan is one of only a few medical institutes internationally to have such a strong translational genomics focus, and is closely integrated with the healthcare system. The Garvan-Weizmann Centre for Cellular Genomics is undeniably taking leadership in this space.

What has drawn you to cellular genomics?

Cellular genomics is a completely transformative technology – literally the next generation of genomic technologies. I believe it will have a huge impact on almost all forms of medicine and many forms of basic research. My goal is to enable the Centre’s continued expansion where we can do very high profile scientific research within this new technology space, push for translation, and for fast and wide-reaching impacts on clinical practice.

What is the Garvan-Weizmann Centre for Cellular Genomics? Why have the Garvan and Weizmann Institutes created it?

There’s scientific expertise everywhere internationally, but Garvan and the Weizmann Institute are two of only a few institutes around the world taking basic research into translational practice. The Weizmann Institute is an enormous multidisciplinary research institute, and they have phenomenally impressive researchers focusing on medical and biological research. And like Garvan, the Weizmann Institute has the ability to be agile enough to action significant changes such as making the Garvan-Weizmann Centre a reality.

I think this joint partnership means that we have a much stronger global impact on cellular genomics by doing it collectively.

What do you hope to achieve through the Centre?

What the Centre’s success really means to me, at a fundamental level, is enabling scientists – at Garvan, at the Weizmann Institute, at our key collaborating institutes, and beyond – to perform research at a level they would not ordinarily be able to do.

The Garvan-Weizmann Centre is still very young, but we’re working to ensure that it’s rapidly recognised as a flagship centre for doing translational cellular genomics research in Australia.

We want to create the platforms that allow the researchers’ expertise to be easily harvested in a seamless manner. We’re looking ahead to where the problems are going to be in two years’ time or longer – and we’re starting to solve those future problems now.

From an organisational perspective, my vision for the Centre is that we expand from a facility-based model to a sophisticated scientific research centre where there are multiple independent research groups. I would like us to form strong strategic links with local, national and international partners who have technology and expertise in spaces are complementary to what we have here.

What’s your passion from a scientific perspective?

For me, my scientific passion stems from two distinct sources.

One is more of a philosophical position. I think as a society we need to constantly progress, to produce new knowledge and always to have innate curiosity about understanding the world around us. So, it is genuinely a privilege to work as a scientist. You get to figure out stuff that no one else has figured out, and then, hopefully, communicate it in a useful manner,

The other side of this is the purpose behind finding out this new information – and that is to make a difference. That’s why I decided quite early on in my training that I wanted to be human-focused and disease-focused.

As a researcher, I’m many steps away from actually treating patients, so I don’t have that direct observation of doing something positive to help someone in an unpleasant situation. But – through research, we can do things that have wide-ranging effects on the health for a great many people globally, not just within the Australian healthcare system but internationally.

Through research, we increase our chances of diagnosing and curing a disease, managing it, reducing the effects of living with disability – and this can cumulatively impact on hundreds of thousands of people around the world.

What are some things about you that people might not know?

I am actually really obsessed with sport. I’ve done a lot of endurance running and cycling. When I was doing my PhD in Edinburgh, I got very heavily involved in Scottish winter climbing. I do a fair bit of sea kayaking as well. I think my underlying interest is in pushing myself!

When I was 22 – just before I started my PhD – I was the first solo non-indigenous person to a complete ascent of the Rajang River system in Borneo. It was a two and a half month expedition, staying with mainly Iban and Dayak people while making my way up the river. It’s largest river system in Sarawak, and there had been an expedition some years before with a whole group of people; I read the expedition report and thought it’d be interesting to go and check it out.

It was an incredible experience of living day-to-day: bartering to borrow a canoe to get to the next village, and getting into more and more remote territory, until I was in the situation where people had never laid eyes on a westerner before.

Associate Professor Joseph Powell is the Head of the Garvan-Weizmann Centre for Cellular Genomics, a Laboratory Head in the Cancer Division at the Garvan Institute for Medical Research, and a member of the Faculty of Medicine, University of New South Wales. He currently holds a NHMRC Career Development Fellowship, with the highest ranked application in his round. He was awarded an NHMRC Research Excellence Award (2015) and the prestigious Commonwealth Health Minister’s Medal for Excellence in Medical Research (2016). His research is focused on understanding the functional mechanisms by which genetic variants contribute to disease susceptibility at a cellular level, and ultimately achieve therapeutic and diagnostic outcomes.

A/Prof Powell obtained his Ph.D. from the University of Edinburgh, in 2010. Throughout his Ph.D. he was a consultant and member of the scientific advisory board at Aviagen, the world’s largest poultry breeding company, where his research was implemented into their multi-million-dollar breeding program (Powell et al. 2012, Animal Genetics). Following his Ph.D. he accepted a position in Prof Peter Visscher’s group and in January 2014, was promoted to Team Leader in Centre for Neurogenetics and Statistical Genomics, at the University of Queensland (UQ). During this time, he formed and led a large international consortium to study the genetic control of gene expression, the Consortium for the Architecture of Gene Expression (CAGE). In 2015, he was recruited as an independent group leader by Queensland’s Institute for Molecular Bioscience, where he pioneered single cell sequencing: building a comprehensive team consisting of robust molecular wet-lab, cutting edge technology, end-to-end bioinformatics pipelines for multiple single cell systems, and new software for analysis of large-scale single cell RNA data cohorts. He is a founding director of SeqBio, a company developing new diagnostic technology for lung diseases using liquid biopsies and single cell sequencing.

A/Prof Powell has made significant contributions to understanding the nature and architecture of genetic control of regulatory variation and its role in disease susceptibility. Of his 63 publications authored to date, he has published in leading science journals including Nature (x4), Nature Genetics (x7), Nature Communications (x6), Nature Reviews Genetics, Genome Research (x4), Cell Stem Cell, Genome Biology (x2) and American Journal of Human Genetics (x2). He is one of the most highly cited scientists in the field of genetics in Australia and in the top 1% internationally.