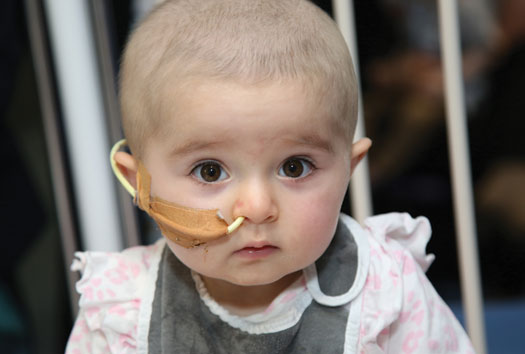 Ellie’s cancer struck when she was only 11 months old.

Two years ago, Mina and Rob gave birth to a beautiful baby girl — Ellie. All seemed well, yet only 11 months later, Ellie was admitted to the Sydney Children’s Hospital, Randwick.

A scan revealed a tumour in her chest so large it was pushing her tiny heart and lungs to one side. Within days, she was on life support, no longer able to breathe. The tumour was aggressive, rare and resistant to chemotherapy.

The race was on

The teams jumped to find out what was pushing Ellie’s cancer to grow so large — and how it might be stopped. Through Genome Power (the Lions Kids Cancer Genome Project), Garvan scientists sequenced the whole genome of Ellie’s tumour.

The timing was just right. The drug had very recently been discovered, and the US company Loxo Oncology agreed to provide it on compassionate grounds, so treatment could begin.

Within four weeks of beginning treatment, Ellie’s cancer had shrunk to a point where she could breathe on her own and no longer needed life support. And six weeks later, she was home. This targeted therapy also appears to be both more effective and less toxic than standard chemotherapy.

Now, a clinical trial of larotrectinib, the drug used to treat Ellie, is open in Australia for all children whose cancer is identified by the Zero Childhood Cancer program as having the same genetic marker. This means that the work done to save Ellie will help other children as well.

If Ellie had been diagnosed with this cancer even two years earlier, she would have died. She is only alive today because of the Zero Childhood Cancer collaborative program and the contribution of whole genome sequencing by Garvan, supported by Lions.

One year since its launch, Zero Childhood Cancer has produced remarkable results for children like Ellie. Almost 130 children with serious and aggressive cancers have been enrolled. This state‑of‑the‑art personalised medicine clinical trial aims to give them the best possible chance of survival and quality of life.

As Ellie’s mum Mina explains, “We were told to think about saying goodbye, she was so sick we didn’t even know if she would reach her first birthday. Today she is such an active and energetic two-year-old... beyond our wildest dreams. We can’t thank the teams at the children’s hospital and research institute enough.”

You can help children like Ellie by supporting medical research today.