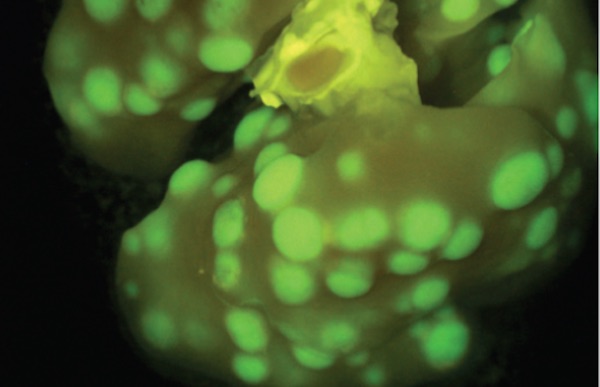 A protein that controls milk production in the breast after pregnancy can ‘go rogue’ in breast cancer and drive the spread of cancer cells to the lungs, Australian researchers have shown. Their work shows that the rogue protein, called Elf5, summons immune cells to gather in breast tumours. In a model of breast cancer, this caused inflammation and encouraged new blood vessels to form around the tumour. These blood vessels became ‘leaky’, opening a gateway for cancer cells to escape into the blood and, ultimately, to spread to lung.

During pregnancy, Elf5 is active in cells within the breast, switching on the genes that drive them to become milk-producing cells during lactation – and without Elf5, no milk would be produced. But when those cells turn cancerous, Elf5 plays an important role in the progression of the cancer to more aggressive forms with a poor prognosis.

“We show that Elf5 drives the spread of breast cancer to the lungs in a model of breast cancer – and it also predicts early metastasis in patients with luminal A breast cancer,” says Dr David Gallego-Ortega of Sydney’s Garvan Institute of Medical Research, who co-led the study with Professor Chris Ormandy (also of Garvan).

Dr Gallego-Ortega says, “In our model, we could immediately see that there were far more secondary cancers in the lungs when Elf5 was switched on – and that the blood vessels within the breast tumours grew more and became more ‘leaky’”.

The results came as a surprise to the researchers.

“When we first saw the metastasis in lung, it was a shock,” says Dr Gallego-Ortega. “We know that Elf5 works to make cancer cells less mobile – yet, for metastasis, cells must leave the primary tumour. So, at first we didn’t understand why Elf5 promoted metastasis so strongly.”

The answer, they showed, was that Elf5 was calling on cells from the innate immune system to gather at the mammary tumours. These immune cells then worked together with the cancer cells, helping them to leave the tumour and enter the bloodstream.

“We know these immune cells are necessary for the cancers to spread, because when we stopped them from gathering, the blood vessels stopped leaking, and we saw much less cancer spread to the lungs.

“What’s remarkable is that, by recruiting these immune cells to promote metastasis, Elf5 actually overrides its own function of keeping cells together. This is a previously undescribed mechanism by which cancer cells can influence immune cells.

“It’s intriguing that immune cells – which are supposed to defend us from disease – are promoting the spread of cancer.”

The researchers went on to show that, in samples from luminal breast cancer patients, high Elf5 levels were seen in the cancers of patients whose disease worsened rapidly. This suggests that Elf5 levels could be used in the future to identify patients who might benefit from treatments usually used in other types of cancer.

“Another important aspect of these findings,” says Dr Gallego-Ortega, “is that they point us in new directions for developing anti-cancer therapies. In particular, therapies that regulate the innate immune system, such as anti-inflammatory drugs, hold promise as possible treatments for luminal breast cancer.”

The research has just been published in the prestigious journal PLOS Biology.

Dr Gallego-Ortega is a National Breast Cancer Foundation and Cure Cancer Australia Foundation Fellow. Prof Ormandy is a Research Fellow of the Australian National Health and Medical Research Council. This work was also supported by the Cancer Council of NSW.