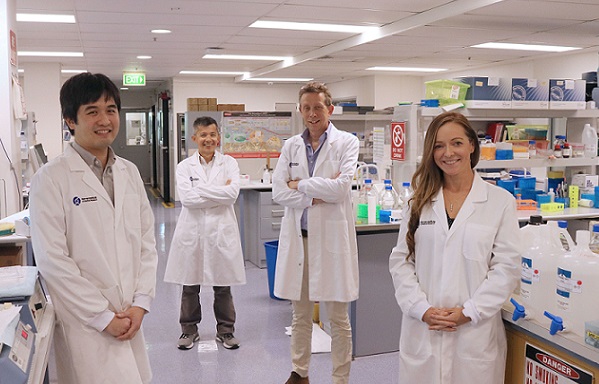 Researchers at the Garvan Institute of Medical Research have discovered a new type of bone cell that may reveal new therapeutic approaches for osteoporosis and other skeletal diseases.

The new cells, which the researchers term ‘osteomorphs’, are found in the blood and bone marrow, and fuse together to form osteoclasts, specialised cells that break down bone tissue. They have a unique genomic profile that reveals promising and as yet unexplored targets for therapy.

“This discovery is a game-changer, which not only helps us understand bone biology but presents significant new in-roads for osteoporosis therapy,” says co-senior author Professor Tri Phan, who heads the Intravital Microscopy and Gene Expression Lab at the Garvan Institute. “Osteomorphs express several genes that seem to be linked to bone disease, which could lead scientists to entirely new ways to target osteoporosis.”

The discovery is published today in the prestigious journal Cell.

Bone resorption under the microscope

At a microscopic level, our skeleton is constantly changing. To support bone growth, maintenance and repair damage, specialised cells on the bone surface break down old bone tissue (known as bone resorption) and build it back up. A change to that balance can lead to bone fragility, including osteoporosis, which is estimated to affect over 900,000 people in Australia alone.

To better understand bone resorption and how to treat it, the Garvan researchers investigated osteoclasts, the cells that are specialised in resorbing bone, in an experimental model. Using intravital imaging technology that allows a deep look inside living bone tissue, the researchers noticed that osteoclasts did something unusual – they split up into smaller cells, and then joined back to form osteoclasts again.

“This process was completely new to us. The consensus until now has been that osteoclasts undergo cell death after they’ve done their job, but we saw they were recycling by splitting up and joining back together again, a process which we hypothesise may increase their lifespan,” says Dr Michelle McDonald, first author of the paper and leader of the Bone Microenvironment Group at Garvan.

“We also found these cells in the blood and bone marrow, suggesting they can travel to other parts of the skeleton, as a likely ‘reserve’ of cells that are ready to fuse and deploy when osteoclasts are needed again.”

Using cutting-edge single cell RNA sequencing technology, which the researchers developed specifically for studying these cells in bone, the team found that the new cells switched on a number of genes.

“The profile of genes that were switched on in these cells was really interesting – while many genes were also expressed by osteoclasts, several were unique. This, together with the evidence of the new re-fusion processes observed by intravital imaging, convinced us that we had discovered a new cell type, which we called osteomorphs, after the Mighty Morphin Power Rangers,” says author Dr Weng Hua Khoo.

With colleagues at Imperial College London, the researchers deleted 40 of the genes switched on in osteomorphs in experimental models. They found that for 17 of these genes, the deletion impacted on the amount of bone and bone strength, indicating a critical role in controlling bone.

“When we further investigated human genomic data in publicly available databases, we found that genes switched on in osteomorphs were linked to human gene variants that lead to skeletal dysplasia and control bone mineral density,” says co-senior author Professor Peter Croucher, Deputy Director of the Garvan Institute and head of the Bone Biology Lab.

“Together, these findings revealed just how crucial osteomorphs are in bone maintenance, and that understanding these cells and the genes that control them may reveal new therapeutic targets for skeletal disease.”

Explaining a common side effect

Beyond revealing new avenues for treatment, the team’s findings provide a possible explanation of a commonly observed clinical phenomenon.

“Some individuals who discontinue the osteoporosis treatment denosumab experience a reduction in bone mass and an increase in so-called ‘rebound vertebral fractures’,” explains Professor Phan.

The researchers say studying the effects of denosumab and other osteoporosis medication on osteomorphs may inform how those treatments could be improved and how their withdrawal effects could be prevented.

“While we don’t yet fully understand the role of osteomorphs, their existence has already led to a major step change in our understanding of the skeleton,” says Professor Croucher. “This research has been an enormous combined international effort across many scientific disciplines. We look forward to exploring how these cells may change the approach to osteoporosis and other skeletal diseases moving forward.”

This research was supported by Mrs Janice Gibson and the Ernest Heine Family Foundation, a Cancer Institute NSW Career Development Fellowship, a Future Fellowship from the Australian Research Council, Fellowships from the National Health and Medical Research Council of Australia (NHMRC) and a Wellcome Trust Strategic Award (101123), an American Society of Bone and Mineral Research Rising Star Award, and a UNSW Cellular Genomics Futures Institute grant.