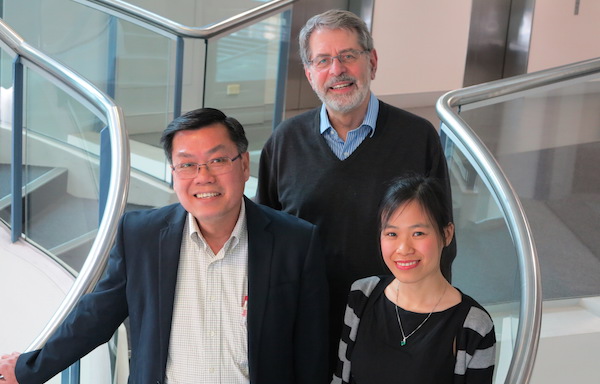 Osteoporosis – brittle, weakened bones – affects 1.2 million Australians and causes more than 150,000 fractures per year in Australia. Osteoporosis and associated fractures represent a major national public health problem, costing the health system billions of dollars per year (total cost estimated at $33.6 billion for 2012-2022)[1] – and with the demographic tsunami of aging upon us, the scale of Australia’s osteoporosis problem will continue to rise.

Osteoporosis is dubbed ‘the silent thief’, because bone loss occurs without obvious symptoms until a bone is broken. Because of the silent nature of osteoporosis, it is very difficult to predict who will or will not fracture.  For this reason, one key goal of osteoporosis research is to identify those who have a high risk of breaking a bone – with the ultimate aim of preventing avoidable fractures.

Professor Tuan Nguyen (Garvan Institute of Medical Research and University of Technology Sydney) led the new research.  He explains, “Our study shows, for the first time, that we can classify an individual’s risk of breaking a bone much more reliably when we take genetic factors into account alongside clinical factors.

“This is a major step towards personalised medicine for osteoporosis."

Prof Nguyen says the findings overturn long-held skepticism in the bone health field about the role of genetics in the clinical management of osteoporosis.

“We have known for many years that a number of genetic variants are linked to low bone density and to fracture – but until now, we have struggled to transform that knowledge into clinical benefit to patients,” Prof Nguyen says.

“It has previously been difficult to see how genetic variation might become clinically important, because the effect of each individual genetic variant on fracture risk is very subtle.

“To overcome this issue, we looked at 62 different genetic variants in tandem across over 1400 individuals in the Dubbo study – and we found that, together, those variants become a powerful predictive tool.

“Once we have validated our findings in other populations, we will be looking to develop a cost-effective gene profiling test that will be available for clinicians to use. The test will determine a ‘genetic risk score’ on the basis of a blood sample, which contains ample DNA for profiling.”

The new findings arise from Garvan’s leading Dubbo Osteoporosis Epidemiology Study, the world’s largest and longest running population-based study of osteoporosis in men and women. The Dubbo Study has been gathering broad-ranging health data, including bone health and genomic information, from thousands of residents of Dubbo, NSW for 27 years.

Among other major contributions to our understanding of osteoporosis, the Dubbo Study has enabled the development of the Garvan Fracture Risk Calculator (GFRC), one of two major algorithms worldwide that is used clinically to determine an individual’s risk of osteoporotic fracture. The GFRC uses clinical risk factors (age, sex, history of falls and fractures, and bone density) to assess an individual’s fracture risk.

Importantly, the new findings now show that genetic profiling further improves the accuracy of the GFRC.

Each of the genetic variants studied by the researchers is a single-nucleotide polymorphism, or SNP – a site at which the DNA code is altered by a single ‘letter’ or nucleotide in some individuals, and where one ‘letter’ is more commonly found in individuals with higher fracture risk. The researchers used each study participant’s SNP profile to generate a personalised ‘genetic risk score’.

For each of the 1400+ individuals studied, the researchers looked at whether a bone had been broken over a 10-year period. They then assessed whether the GFRC had correctly predicted the risk of fracture – and whether the use of the ‘genetic risk score’ could improve the accuracy of the GFRC’s prediction.

The result? A more accurate prediction of fracture risk.  The researchers found that, when the ‘genetic risk score’ was used with the GFRC, the correct classification of individuals as high or low fracture risk was increased by 12% over and above that of the traditional clinical risk factors, which together correctly classify up to 80% of the studied individuals into high and low risk categories.

Professor John Eisman (Garvan), who heads the Dubbo study, says the findings, and their clinical relevance, are heartening.

“Each time we improve our understanding of the risk of bone fracture in osteoporosis, we are taking a step towards easier and more straightforward clinical decision-making for Australian GPs and Australian people – and in turn towards better outcomes for the 1.2 million Australians living with osteoporosis.”

Professor John Mattick, Executive Director of Garvan, adds, “Once individual genome sequences become a routine part of medical records, this genetic risk information will be readily available and be used to optimise the management of health in older people.”

The research has recently been accepted for publication in the Journal of Bone and Mineral Research, the premier journal in bone biology internationally.