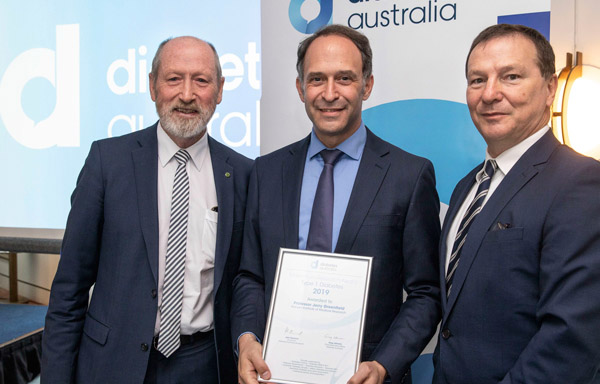 Professor Jerry Greenfield with Rowan Ramsey MP, Member for Grey, and Graham Perrett MP, Member for Morteon, the Co-Chairs of the Parliamentary Friends of Diabetes group.

Professor Jerry Greenfield from Garvan’s Diabetes and Metabolism Division and St Vincent’s Hospital Department of Diabetes and Endocrinology received one of two Diabetes Australia Millennium Research Awards of $150,000. The award will support Professor Greenfield’s novel study of insulin resistance in people with type 1 diabetes – a group who have previously been thought only to have a defect in insulin production.

Type 1 diabetes affects more than 120,000 individuals in Australia and the global incidence is rising by 4% per year. Type 1 diabetes is known to cause cardiovascular disease and premature death.

Professor Greenfield and his team, including PhD candidate Jennifer Snaith and collaborators from St Vincent’s and Westmead Hospitals, will be looking at a group of people with type 1 diabetes and measuring how sensitive they are to insulin at the liver and muscle. The aim is to try to establish why some people with type 1 diabetes are prone to insulin resistance and to examine possible strategies for treatment.

While insulin resistance is usually associated with type 2 diabetes, it is increasingly being detected in people with type 1 diabetes. Insulin resistance can increase a person’s risk of developing a range of diabetes-related complications, such as cardiovascular disease.

“There is a need to determine the metabolic factors that contribute to insulin resistance in type 1 diabetes, as this knowledge will open up the opportunity to being able to target these abnormalities in order to reduce the risk of cardiovascular disease in the future.”

Because these people have reduced sensitivity to insulin, Professor Greenfield believes that metabolic therapies, such as the medication metformin, will have potential to improve diabetes control, weight and cardiovascular risk, which will be measured by non-invasive vascular markers in study participants.

Professor Greenfield was presented with the Millennium Award on Monday 26 November at an event at Parliament House, Canberra, by Graham Perrett MP and Rowan Ramsey MP, co-chairs of the Parliamentary Friends of Diabetes.

About the Diabetes Australia Research Program
The Diabetes Australia Research Program supports and develops outstanding diabetes research in Australia by funding a range of grants across the full spectrum of diabetes research through a merit based, competitive, peer review process. Research projects can focus on prevention, management of diabetes or the cure for diabetes. Each year, two Millennium Awards of up to $150,000 (one for type 1 diabetes and the other for type 2 diabetes) are presented.