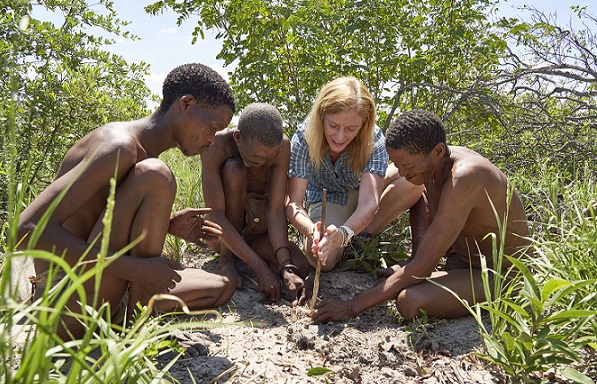 Professor Vanessa Hayes has been presented with the MJD White Medal from the Genetics Society of Australasia, which commemorates geneticist Michael White and is intended to recognise a large body of work of major significance in a specific field of genetics.

Professor Hayes believes that to understand the genetic basis of disease, we need to define the genetic diversity of our entire modern human family.

She accepted the Medal by delivering yesterday’s MJD White lecture at the Genetics Society of Australasia’s annual meeting.

Professor Hayes’ genomics research has largely been focused on bringing the benefits of genomic medicine to the peoples of her region of birth, southern Africa.

Throughout her career Professor Hayes has made significant contributions to the development of genomic technologies to define the extent of human genome variation and the translation of genomic variation and clinical information.

Professor Hayes has also identified modern human’s most diverse lineages, tracing back to our earliest divergence from a shared global ancestral population. As such, her team has been rewriting modern human history, most recently addressing one of the biggest scientific questions of all times – ‘where did we come from?’

In 2010, Professor Hayes co-led the team to profile the first African and indigenous personalised genomes. This study added the largest single contribution of novel genomic variation to the database of human genome diversity. Through committed engagement within southern African communities, she founded the largest African prostate cancer database and bioresource, while leading the first whole prostate cancer genome profiling that included the African continent.

Through direct comparative analyses with Australian patients, her team has identified genomic signatures that may shed light into the observed disparity in disease outcomes for men of African ancestry. Her work has highlighted that researchers need to look beyond the constraints of borders to make significant contributions to the understanding of complex diseases, such as prostate cancer.

Professor Chris Goodnow, Executive Director of the Garvan Institute, says: “Vanessa is a pioneer of genomics research and internationally renowned as an expert in indigenous genomics. She is most deserving of the MJD White Medal. Her scientific prowess draws on her personal and lived experiences and has made a unique and paradigm-shifting contribution to the global science community.”

Professor Kathy Belov AO, Pro-Vice-Chancellor (Global Engagement) at the University of Sydney, who nominated Professor Hayes for the award, says: “Vanessa has stayed true to her belief that Africa, in particular southern Africa, holds the key to unravelling the mysteries of our earliest human beginnings. She has been using this knowledge not only to generate a map of genomic diversity that is globally inclusive – she has been using this knowledge to include Africa and Africans within the genomic revolution.”