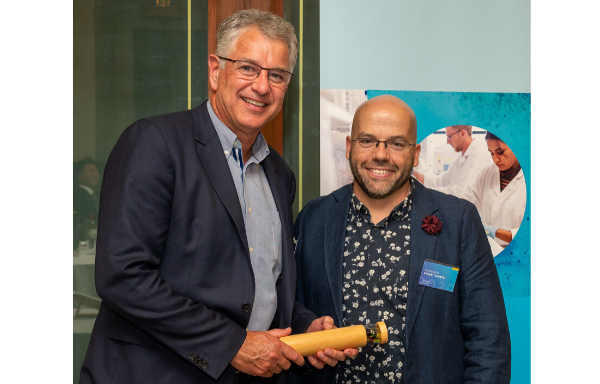 Professor Stuart Tangye, Immunity and Inflammation Research Theme Leader at the Garvan Institute of Medical Research, has been presented with the National Health and Medical Research Council (NHMRC) Peter Doherty Investigator Grant Award, an award that highlights his outstanding leadership in the field of medical research.

The award is presented to a research leader with an outstanding record of achievement who submits the highest ranked application for an NHMRC Investigator Grant in the Leadership level, out of 765 applicants in the 2019 round.

Professor Tangye was presented with his award at the NHMRC Research Excellence Awards Ceremony in Canberra last night.

“I’m honoured to have received this award from the NHMRC,” says Professor Tangye. “It’s a great passion of mine to be able to unlock the inner workings of the immune system on a cellular and molecular level and then apply what we’ve learnt to help patients and radically change their lives. To be recognised for my work – it’s incredibly gratifying, but also very humbling,” he says.

The award recognises the significant reach and impact of Professor Tangye’s research to date. In the past 25 years, he has been dedicated to understanding what causes a range of immune and inflammatory diseases, including the genetic causes of these conditions.

His research investigating human immune cells, particularly B and T cells in patients with Primary Immunodeficiency Diseases (PID) has greatly contributed to our understanding about how these cells differ from healthy individuals without disease, and revealed the cellular mechanisms that disrupt the function of these cells to cause disease.

His international research collaborations have led directly to improved outcomes for patients. Among his successes, Professor Tangye’s team played critical roles in international collaborations with scientists and clinicians from the Rockefeller University, New York and the Institut Imagine, Paris that identified the genetic cause of 16 immune diseases - allowing clinicians to significantly improve patient diagnosis and develop therapeutic treatments for some of these diseases.

His research has also changed the way clinicians diagnose disease worldwide. One technique Professor Tangye’s lab developed - rapid flow-cytometry assay - that has now been adopted in many clinical labs, allows clinicians to fast track the diagnosis of patients with rare immune diseases by identifying disease-causing genes.

An ultimate goal for researchers in the field of medical research is being able to apply research discoveries to help individuals suffering from disease. Professor Tangye has achieved this via an innovative program that he set up and leads – the CIRCA program.

CIRCA, which stands for the Clinical Immunogenomics Research Consortium of Australasia, is a Garvan-led collaboration of approximately 100 scientists and clinicians with diverse backgrounds from 13 organisations, including St Vincent’s Hospital Sydney, Royal Prince Alfred Hospital and Sydney Children’s Hospital Randwick, with the combined goal of improving the lives of patients with rare immune diseases.

The world-leading CIRCA program uses advanced DNA sequencing technologies to identify genetic differences in immune cells. Finding these genetic differences has led to the development of new and effective treatments for patients with rare immune disease.

Professor Tangye’s CIRCA research has identified the gene variants that underlie immune disease in more than 70 patients. This has led to treatments that have dramatically improved patient treatment outcomes and reduced their average time in hospital from approximately 65 days to fewer than five days.

Professor Tangye’s research has also led to the development of effective therapeutic treatments for a range of more common autoimmune diseases.

Professor Tangye’s research is recognised at the highest level in the scientific community, nationally and internationally.

In 2016, Professor Tangye was elected to the International Union of Immunological Societies Expert Committee for Inborn Errors of Immunity and appointed chair of the committee in 2018. This committee publishes findings relating to the diagnosis and treatment of rare immune diseases and advises on the best clinical treatments for patients.

Professor Tangye is also the author of more than 195 scientific papers and sits on the editorial boards of a number of journals including the Journal of Experimental Medicine, Journal of Immunology, Journal of Clinical Immunology and Frontiers in Immunology.

The NHMRC Research Excellence award adds to Professor Tangye’s significant number of prior recognitions, including the Gottschalk Medal from the Australian Academy of Sciences (2011) and the UTS Faculty of Science Alumni Award for Excellence (2013).

Professor Tangye is the first Australian to receive the President’s Award from the Clinical Immunology Society of North America (2019). He is also the only researcher at the Garvan Institute to have been named a Clarivate Web of Science ‘Highly Cited Researcher’ (2019, 2020).