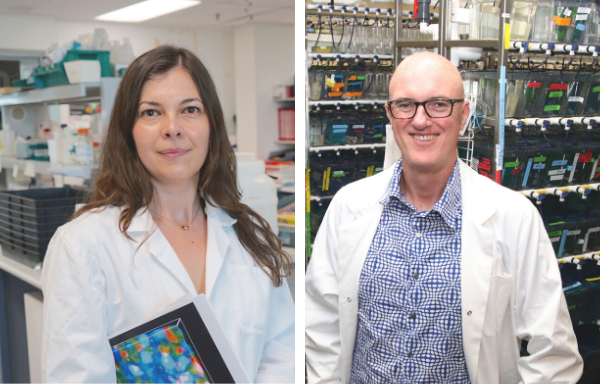 The grants support Associate Professor Shane Grey and Dr Tatyana Chtanova in finding new and effective treatments for pancreatic cancer, one of the most lethal cancers with a current 5-year survival rate of just ~9%.

Over 3,200 people are diagnosed with pancreatic cancer in Australia each year and by the time most are diagnosed, the cancer has often begun to spread outside the pancreas.

The new research will investigate how using immunotherapy – cancer therapy designed to activate a patient’s own immune system to target cancer – could be used to treat the disease. This type of therapy is effective in other cancers, but has not yet been successful in the treatment of pancreatic cancer.

Using CRISPR gene editing technology, the project team will genetically alter the A20 checkpoint in T cells, a type of immune cell with the ability to target foreign cells in the body. The researchers hope that ‘tuning’ the T cells and re-administering them to the patient could effectively target pancreatic cancer cells.

Through the project grant, the team will conduct a series of pre-clinical studies to investigate the impact of A20 variants in mouse models of pancreatic cancer. Associate Professor Grey says this approach may be beneficial as a stand-alone pancreatic cancer therapy, or work in synergy with emerging immune therapies.

The aim of this project is to develop a novel immunotherapeutic approach that, unlike most currently available immune therapies, targets the innate rather than adaptive immune system, which can lead to an influx of immune cells into tumours.

In experimental models, the project team hopes to harness the immune system’s ability to fight infections, by injecting microorganisms directly into pancreatic tumours to initiate a response by the innate immune system.

The researchers have already tested their approach in experimental models of lung cancer and melanoma, where it was shown to dramatically increase immune cell influx and inhibit tumour growth. The researchers hope targeting the innate immune system will show similar promise for the treatment of pancreatic cancer.

Michelle Stewart, CEO of the Avner Pancreatic Cancer Foundation, says the Foundation is pleased to award funding to these innovative projects. “We are encouraged by the high calibre of the research and believe that investment into projects like these will help us to increase survival for people diagnosed with pancreatic cancer,” she says.