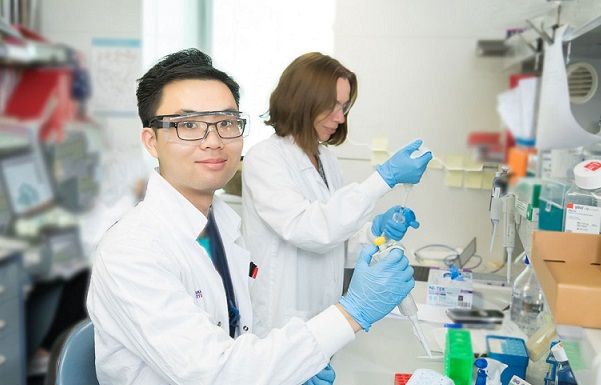 Investigating a rare genetic immune condition has allowed researchers to uncover a new drug target for a range of autoimmune diseases, which affect one in eight individuals and currently have few therapeutic options.

An international team, led by the Garvan Institute of Medical Research, discovered that the protein PI3K is central to a process that immune B cells undergo to become ‘tolerant’ to the body’s own cells, which goes awry in autoimmune disease.

The discovery is an example of the enormous potential that lies in investigating rare clinical cases for finding new treatments for disease.

“We’ve uncovered a crucial pathway that helps the immune system discriminate between the body’s own cells and pathogens that are foreign,” says co-lead author A/Prof Elissa Deenick, who heads the Lymphocyte Signalling and Activation Lab at the Garvan Institute. “Drugs that target this pathway already exist and could be of benefit to patients with autoimmune disease.”

The team published their findings this week in the Journal of Experimental Medicine.

The Garvan researchers first began investigating the PI3K protein in 2013, after it was discovered that patients with rare genetic variants of the PI3K protein present with a range of common clinical symptoms. This included poor responses to vaccines and microbes and an inability to control viral infections, but over a third also developed autoimmune disease.

“PI3K is a signaling protein which sends messages between different parts of the cell. In this study, we discovered that the patients’ variants in the PI3K protein caused an immune cell population called B cells to become overactive,” explains A/Prof Deenick.

“These B cells mistakenly recognise the body’s own cells as ‘foreign’ and produce high levels of ‘autoantibodies’, which can cause significant damage to tissues and organs.”

The authors say this reveals potential methods for preventing the production of autoantibodies.

A number of drugs that ‘switch off’ PI3K are already available and are used in patients to treat various B cell cancers such as lymphoma and leukemia. These and related drugs have been trialed for treating individuals with PI3K variants.

However, the findings may also have broader implications for autoimmune disease.

“There are a number of autoimmune conditions, such as in thyroid disease or lupus, where patients produce higher levels of autoantibodies. Targeting PI3K in individuals with these conditions may turn off the self-reactive response early enough to prevent the immune system from causing significant damage in the body,” says A/Prof Deenick.

From rare cases to big impact

“We are now collaborating with clinicians at a number of Sydney hospitals to investigate whether patients with autoimmune conditions have the cellular signatures that suggest targeting PI3K could be an effective treatment for them,” says A/Prof Deenick.

The team will continue to study how PI3K signaling changes immune function, to help reveal further therapeutic targets in future.

“But what we see here is the potential of a discovery that was made through a few rare medical cases to be translated much further, which may change therapeutic options for people affected by autoimmune disease around the world.”