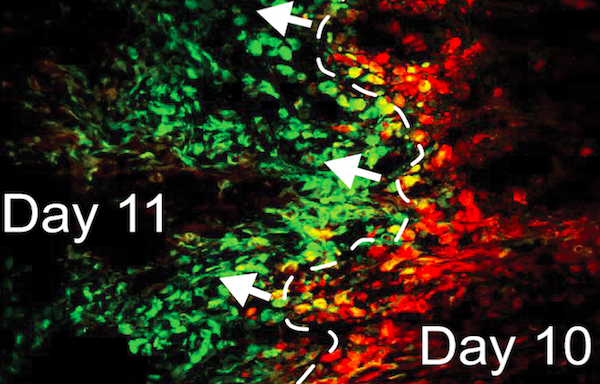 In a pioneering study, researchers at the Garvan Institute of Medical Research have discovered a new approach to fight treatment-resistant regions within pancreatic cancer – one of the world’s deadliest cancers. For the first time, they have monitored these drug-resistant regions in pancreatic tumours as they travel, spread and grow in real time – and are finding new ways to neutralise these moving targets.

The findings, which were uncovered in mice, are published today in Cell Reports.

Pancreatic cancer has one of the poorest survival rates of all cancers, and is predicted to be the second-leading cause of cancer deaths by 2030. The 5-year survival rate stands at less than 7.7%1, and has scarcely changed in decades.

Regions of low oxygen, which move around within tumours, are a hallmark of pancreatic tumours. Importantly, these travelling pockets of low oxygen are resistant to treatment. Associate Professor Paul Timpson (Cancer Invasion & Metastasis lab head, Garvan), whose team led the study, says these nomadic regions are a major concern in the fight against pancreatic cancer.

“And the movement of these low oxygen, drug-resistant regions in cancer is incredibly problematic, as it means that those areas are constantly changing - it’s here today, there tomorrow, with no way for us to know where the resistance will be in the future.”

To tackle this problem, A/Prof Timpson and his team have overcome a major technical hurdle and developed an innovative live tracking approach, allowing them to observe the drug response of these treatment-resistant compartments in pancreatic tumours.

“To make real gains in the fight against pancreatic cancer,” says A/Prof Timpson, “we can’t wait for new technology to come to us; instead, we often have to develop it ourselves.”

Using their new live tracking technology, they monitored individual cells within low-oxygen regions of pancreatic tumours, and observed the response to treatment. They saw that cells were resistant to three clinically relevant pancreatic cancer treatments, including the cancer inhibitor AZD2014.

So how do you attack a resistant, moving target?

For James Conway – a PhD student in A/Prof Timpson’s lab and the lead author in this study - the answer lies in precision weaponry. “We took advantage of a tool that is ideal for this situation - TH-302 - a molecular ‘warhead’ that’s activated only in low oxygen regions.”

The results from this new study represent an exciting new opportunity for pancreatic cancer, where little progress has been made in the past 40 years.

“The beauty of this new treatment combination lies in the precision of low oxygen-activated drugs.” says James. “Their highly toxic, activated form is triggered specifically in low oxygen regions. This makes them incredibly versatile - they can be given in highly concentrated doses because their toxicity to normal tissues is minimal, but in low oxygen areas of the tumour it is lethal, exactly where the drug resistance occurs.”

The new findings would not have been possible without new technology developed at Garvan. For A/Prof Timpson, investing in new technology is key to furthering scientific discovery.

“Instead of static snapshots,” says A/Prof Timpson “we have a dynamic new way to measure responses in single cells in their native environment – by peering into a live animal. That real time feedback is incredibly valuable. ”

Co-corresponding author Dr Jennifer Morton, of the Beatson Institute for Cancer Research UK, is optimistic about what these results mean for patients.

“Pancreatic cancer is a devastating disease with virtually no effective treatments - but our live imaging showed us that although these areas can move around, we can target them and hopefully reverse resistance to therapy, increasing the options for these patients.

Looking ahead, James highlights the clinical relevance of this study.

“AZD2014 is already being used in clinical trials and, given the potential for use in cancer treatment, we want to find combination therapies that will improve patient responses even further beyond the current standard-of-care. We believe our results bring us one step closer towards application in a clinical setting.”

Beyond pancreatic cancer, these results have the potential to change the wider landscape of cancer treatment. Treatment resistance as a result of low oxygen is a fundamental problem across many cancers, and these findings are likely to have a broad impact in paving the way to more effective, targeted cancer therapies.

Garvan is fortunate to receive outstanding support for its pancreatic cancer research program from organisations like the Avner Pancreatic Cancer Foundation and individuals who understand the crucial role of medical research in making a difference in the clinic.

Hypoxia refers to areas of low oxygen, whereas normoxia refers to areas with normal oxygenation. In cancer, hypoxia is thought to be associated with insufficient vascularity, a disorganized vascular network, and an imbalance in cellular oxygen demands that leads to limited oxygen diffusion and perfusion. In the 1920s, German scientist Dr Otto Warburg discovered that cancer cells often ignored normal oxygen demands in favour of up-regulating alternative energy sources. This adaptive strategy allows tumours to grow beyond the normal oxygen demands that limit a tissue. However, this also leaves them vulnerable to new approaches using hypoxia-targeted toxic compounds that target tumours, with minimal toxicity to the normal tissue.

How does the new live tracking technology work?

To get the most precise assessment of drug response, A/Prof Timpson and his team are combining high level imaging technology with oxygen-sensitive nanoparticles that can be read on the order of the microseconds, and whose reach extends deep into tumours to reveal oxygen content at a single cell resolution. In parallel, they are able to overlay this information on oxygen levels with nanosecond readouts of drug performance using fluorescent biosensor technology.

In a previous study, co-corresponding author Dr Jennifer Morton, of the Beatson Institute for Cancer Research UK, demonstrated that AZD2014, a dual mTOR inhibitor - “dual” because it blocks two cellular pathways that lead to cancer cell growth – is as effective as the current standard-of-care for pancreatic cancer, Gemcitabine. In this study, live tracking experiments showed that even AZD2014 is subject to hypoxia-induced resistance, but this resistance could be alleviated in combination with a hypoxia-activated toxic drug TH-302.