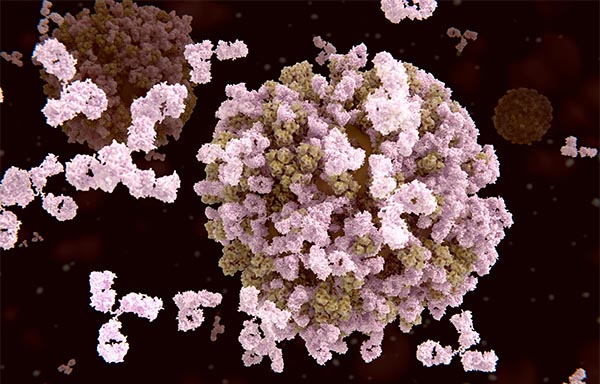 A study by researchers at the Garvan Institute of Medical Research has shed new light on the ‘danger signals’ that spur the immune system to attack invaders. The findings open the door to further research into improving vaccination methods and to advancing our understanding of autoimmunity.

The study, led by Dr Claudia Loetsch and Associate Professor Cecile King of Garvan’s Immunology Division, investigated why red blood cells from sheep bring about such a powerful immune response in other animals. The researchers identified a key ingredient that has been overlooked for decades: a molecule called RNA.

The findings were published last month in the journal Cell Reports.

A/Prof King explains, “For almost a century, researchers have been using the injection of red blood cells to study the immune response, and we owe much of what we know about the generation of antibodies to these cells.

“Sheep red blood cells have been a crucial tool for immunology research as they bring about an extremely strong immune response in other mammals, which we have been able to study – but we still had no real idea why the cells were causing such a strong response. Now we know that RNA plays a vital role.”

The immune response to an invader in the body – such as a disease-causing bacterium or virus – is a complex process, involving a host of immune cells such as ‘T cells’ and ‘B cells’ and the production of antibodies to fight the infection.

“It is an extremely complex system,” says A/Prof King. “To identify an agent as ‘foreign’ and elicit an immune response, the immune system needs to detect a specific ‘danger signal’ from the intruder. For example, this could be a particular toxin or protein produced by bacteria.

“That danger signal causes a complex chain of reactions inside immune cells, making the immune response to the invader far stronger.”

This reaction to danger signals is a key component of immunisation methods used to prevent disease in people. Vaccines usually contain a small amount of the pathogen against which an individual is being immunised, as well as a danger signal (known as an ‘adjuvant’), sometimes mimicking part of a bacterium to boost the immune response and strengthen the immunisation. There is, however, a recognised need for better adjuvants to improve responses to current vaccines.

These new findings could offer a solution.

“For decades, it was generally accepted by immunologists that sheep red blood cells did not have this additional danger signal,” explains A/Prof King. “It was thought that the potent immune response was simply a result of their large size stimulating immune cells into action.

“In our study, we were surprised to find that the RNA from the sheep blood cells was activating a similar chain of reactions within the immune cells that the danger signals from bacterial and viral infections activate. So effectively, the RNA is the danger signal, or adjuvant.

"Every living thing makes RNA, from the smallest viruses to each cell in our own body. So this is an important step forward for immunology research to discover that the RNA from blood cells can serve as a danger signal, activating immunity.

“We’re still figuring out why this RNA is such a powerful danger signal – if we can understand how it works, we should be able to use this information to develop better adjuvants for vaccinations. More effective vaccination methods would have huge benefit to overall healthcare.”

The findings may also provide clues to autoimmune conditions, such as type 1 diabetes and lupus.

A/Prof King says, “In autoimmunity, the immune system attacks an individual’s own cells. Our findings suggest that it’s worth exploring whether RNA in the target cells is contributing to the severity of the autoimmune response. We are now investigating this, in the hope that we can identify methods to tune down the immune response in autoimmunity.”