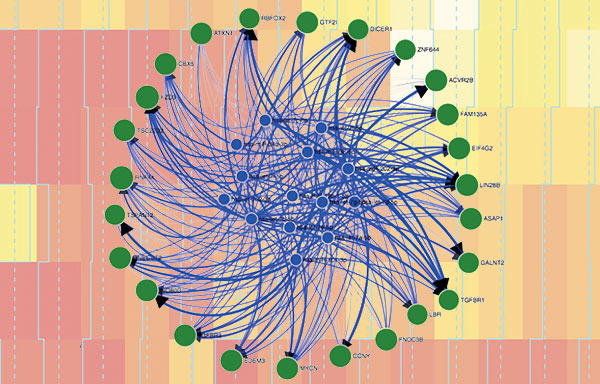 A study led by researchers at the Garvan Institute of Medical Research has provided a new understanding of how ‘microRNAs’ function in cancer. These short strands of RNA – DNA’s less well-known cousin – can affect the activity of genes in cells, and the researchers showed that some microRNAs can affect whether cancer cells live or die. The findings suggest possible new drug targets for a number of cancers, including neuroblastoma.

The study, led by Associate Professor Alex Swarbrick of Garvan’s Cancer Division, in collaboration with researchers at the Peter MacCallum Cancer Centre in Melbourne, has just been published in the journal Nucleic Acids Research.

A/Prof Swarbrick explains, “MicroRNAs are tiny pieces of RNA, only about 20 ‘letters’ long. They are ‘readouts’ from our DNA, but unlike many other longer RNAs, they don’t go on to code for proteins – which is why, for a very long time, they were considered to be ‘junk’ in the cell.”

“We now know that’s far from the case. In fact, microRNAs play essential roles in our cells; they bind to other RNA molecules that are acting as the intermediary between genes and proteins, and ‘shut them down’, which means that the genes that the RNA has been ‘read’ from are shut down too.

“MicroRNAs wield a huge amount of power for such small molecules,” A/Prof Swarbrick says. “One microRNA can bind to many different messages from hundreds of different genes – and remarkably, we now know that microRNAs actually control more than half the genes in the human genome,” says A/Prof Swarbrick.

Recently, a role for microRNAs in cancer has been emerging.

A/Prof Swarbrick says, “Other studies have focused on individual cancers, and small numbers of microRNAs. We wanted to see the bigger picture – our aim was to investigate as many of these small but powerful microRNAs as we could, across different cancer types.”

To achieve this, A/Prof Swarbrick and Garvan’s Dr Iva Nikolic (now based at Peter Mac) worked closely with Associate Professor Kaylene Simpson and her team at the Victorian Centre for Functional Genomics (VCFG), at Peter Mac. The researchers used state of the art ‘high throughput’ technology to perform a comprehensive ‘functional screen’ of over 1200 different microRNAs, to understand how they functioned in breast cancer, prostate cancer and neuroblastoma cell lines.

The researchers identified hundreds of microRNAs with previously unknown roles in cancer cell growth and survival.

“These microRNAs then led us to the genes that they regulate – for example, genes that drive cancer progression. This gives us a much broader picture of what’s happening in cancer cells,” A/Prof Swarbrick explains.

“These microRNAs are themselves interesting targets for therapeutic development, because it’s relatively straightforward to design therapies that mimic or block microRNAs.

“And importantly, by targeting one microRNA, we can effectively block the activity of hundreds of genes at a time. This can have a large impact on cancer cells.

“We have identified the most important microRNAs in the cancer cells we studied – meaning we now have key targets ready to be explored therapeutically.”

The researchers found that microRNA activity was quite diverse and specific across the different cancers studied. For instance, they found some microRNAs – from the ‘miR-515 family’ – that were important only in neuroblastoma cells.

“Neuroblastoma is a rare and aggressive childhood cancer and there is a vital need for more effective targeted therapies for this condition. It’s our hope that microRNAs may one day provide a solution,” says A/Prof Swarbrick.

“We are planning to take this work further, in the hope that one day the microRNAs we have identified can be used to develop new therapeutics and provide clinical benefit to individuals with these and other types of cancers.”

“We’ve made our database available to other researchers, so that they can interrogate the wealth of microRNA information that we now have. By sharing and combining data, we as researchers can accelerate further cancer discoveries,” says A/Prof Swarbrick.