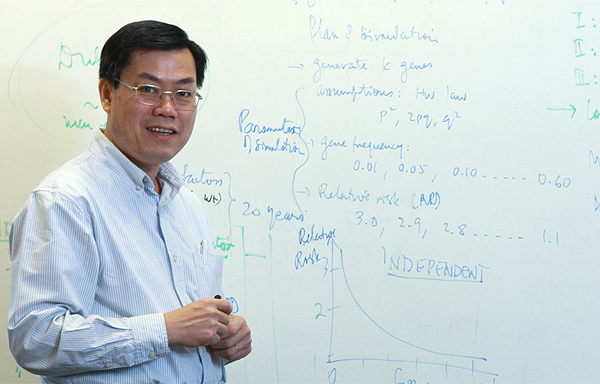 A study undertaken in Vietnam for the first time reveals the high prevalence of knee osteoarthritis, showing that roughly a third of Vietnamese men and women over the age of 40 are affected.

Osteoarthritis is a degenerative joint disease, and is the most common cause of disability in the elderly. It can affect many joints in the body, and is often found in knees, making leg movement painful.

Professor Tuan Nguyen from Sydney’s Garvan Institute of Medical Research, in collaboration with Dr Lan Ho-Pham, Head of Rheumatology at People’s Hospital 115 in Ho Chi Minh City, randomly recruited 170 men and 488 women, aged between 40 and 98, from Ho Chi Minh City and measured the prevalence of knee osteoarthritis and self-reported pain. The results of the study, the first of its kind in Vietnam, are reported in the international journal PLOS ONE, now online

Professor Nguyen and Dr Ho-Pham wanted to compare the prevalence of osteoarthritis in Vietnam with other populations, and were at the same time intent on finding simple diagnostic measures.

The study is important because it reminds us that ageing, fatter, populations around the world will impose escalating skeletal healthcare costs in the future. The proportion of people aged 65 years and older in Asia alone is estimated to rise from roughly 7% in 2008 to16% in 2040.

Apart from age and BMI, this study found three other predictors of knee osteoarthritis: pain when squatting; a bony enlargement of the knee; and ‘crepitus’ – grating or popping sounds in the joint.

“We took X-rays of participants’ knees to establish whether or not they had osteoarthritis, and then we compared the results with the other predictive measures,” said Professor Tuan Nguyen.

“It was interesting to note factors that will help GPs diagnose and treat their patients. Women who reported knee pain, for example, were three times more likely to have osteoarthritis than men, although why that is, we’re not sure.”

“Pain when squatting was a reliable predictor. This is relevant in Asia, where people are far more likely to squat or sit on the floor than they are in Australia, Europe or the United States.”

“We did this study because doctors in Vietnam wouldn’t take X-rays of every patient they suspected had osteoarthritis. They would just examine their patient and ask them whether or not they had a pain in the knee. So we wanted to know whether self-reported symptoms are consistent with osteoarthritis shown in X-rays.”

“The study is particularly relevant to Vietnam, but its conclusions are widely applicable elsewhere.”

“The main message is that while we can’t avoid getting older, we can make an effort to maintain a healthy body weight, and to strengthen leg muscles with exercise. Both will help put less strain on the knee joints, and keep us mobile longer.”