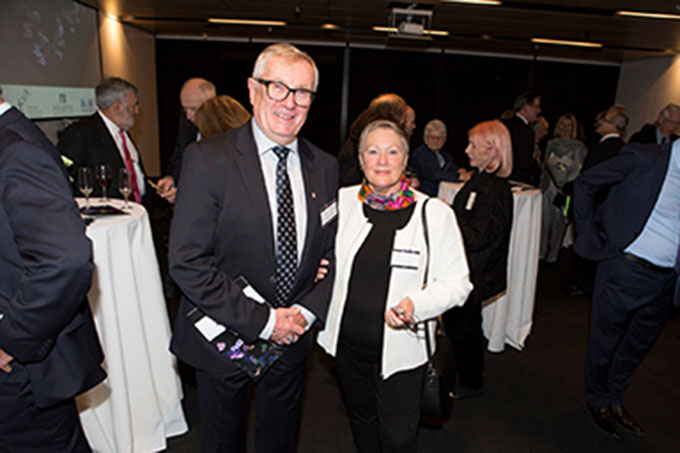 When Mosman barrister and author Gabriel Farago stepped back from the law in 2008, he and his wife Joan turned their minds to their estate, and how to give something back to a country that had been so good to them.

Gabriel arrived in Australia from Eastern Europe as a teenager, and is very interested in medical research. This resulted in several lively conversations with friends and advisers about the best way to support science, and make a difference.

A meeting with Charles Curran – then chair of the Garvan Institute of Medical Research – soon resulted in a tour of the state-of-the-art research facility in Darlinghurst, NSW. The Faragos were so impressed by the ground-breaking research being undertaken by the many talented scientists working there, they decided to leave a large gift in their Will to the institute.

But it didn’t stop there. Gabriel became a director of the Garvan Research Foundation and wrote a medical thriller – The Hidden Genes of Professor K – which he dedicated to the Garvan to create awareness of what the institute stands for, and what it does. In 2017, the book was voted ‘Outstanding Thriller of the Year’ by the IAN in the US and became a best-seller, creating huge interest in medical research, the Garvan, and philanthropy generally. (To find out more, please visit Gabriel’s website at www.gabrielfarago.com.au).

“They are doing some amazing work at the Garvan, especially in genomics. What could be more important than supporting cutting-edge medical research that will benefit future generations, long after we are gone?” said Gabriel.

Include a Charity Week – September 10-16 – aims to lift that 7.4 per cent figure by a few percentage points so that more money can flow to the charitable sector and provide much-needed funds for its vital work.

Since Include a Charity began in 2007, the group has witnessed encouraging signs that more people are interested in leaving a gift in their will. Their most recent survey found that 25% of Australians said they would like to leave a gift in their Will.

Armed with the knowledge that a quarter of Australians would be happy to consider charitable bequests, Include a Charity is now encouraging more solicitors, estate planners and financial advisors to raise the subject with clients.

Helen Merrick, Include a Charity Campaign Director, says a myth persists that gifts in Wills are only for the wealthy. “In reality, most gifts come from ordinary, hardworking Australians. Any gift can make a difference to the community a charity serves,” she said.

To find out more about leaving a gift in your Will to Garvan, please visit our bequest information page.