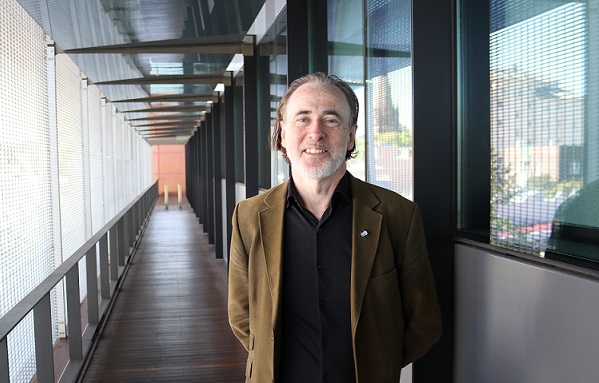 Every time a human cell divides, it has to copy its genome – a two-metre, six billion letter-long instruction manual. The process requires thousands of proteins to work in sync to carry out specialised steps and accuracy is key, as errors in the copy can lead to diseases such as cancer.

So how does a cell coordinate this logistical feat?

“There is a huge body of research available on the process, but it can be remarkably difficult to make sense of how these interactions are coordinated, which proteins control which, and the precise timing, duration and cellular location of the interactions. That’s where biologists, computer scientists and biodata visualisation experts working together can provide a unique perspective that gives researchers fresh view of existing knowledge.”

In a ‘SnapShot’, published in the prestigious journal Cell, Professor O’Donoghue and his colleagues, including Associate Professor Andrew Burgess (ANZAC Research Institute, University of Sydney) and collaborators at the Novo Nordisk Foundation and the University of Copenhagen, have illustrated the complex biology of DNA replication in an entirely new way – a step-by-step roadmap of how a cell copies its DNA.

Biology at a glance

To create the SnapShot, the authors incorporated the findings from over 280 scientific articles published on the molecular events involved in DNA replication. The resulting graphic marks out, in clockwise sequence, the key events that control how DNA is copied inside a cell. 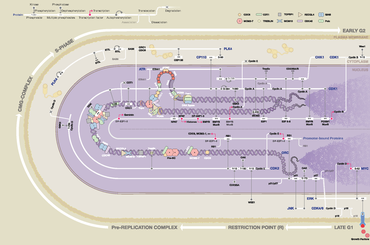 The SnapShot leads the viewer through a part of the cell cycle known as S-Phase. It begins its journey as the cell responds to signals from neighbouring cells, giving a green light to begin the process of cell duplication. It then follows the proteins that separate DNA into two single strands, copy each strand to produce two double-stranded copies, monitor the progress, assess errors and ensure the cell does not progress to the next stage in the cell cycle until the genome is copied correctly.

The SnapShot ends at the point where DNA replication is complete, and the cell is ready to begin the next process of dividing into two separate cells.

“We have a much better understanding now than ever before of the thousands of proteins that interact within the cell, and how they coordinate these sophisticated, complex molecular processes,” says Professor O’Donoghue.

“What this SnapShot has achieved is to summarise this information, in an easily understandable format. Researchers can, at a glance, see which key proteins are involved at different stages of the process and, with a single click, drill down to find out further details about each of the events shown.”

The graphical review is available in an online interactive version, where hovering over an individual protein or biological pathway allows the viewer to highlight all associated events, and clicking on an event gives further information on its specific role in DNA replication.

The team used the Minardo layout strategy to develop their interactive graphic. Minardo is a biodata visualisation method that Professor O’Donoghue developed to analyse and interpret vast volumes of complex temporal data and to summarise them visually and clearly. The graphic complements the team’s previous SnapShot on cell division.