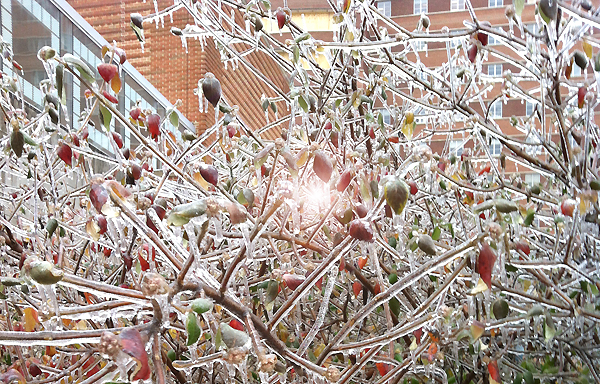 A new study being presented today at ICE/ENDO 2014, the joint meeting of the International Society of Endocrinology and the Endocrine Society in Chicago, demonstrates that ambient temperatures can influence the growth or loss of brown fat in people. Cool environments stimulate growth, warm environments loss.

Brown fat, also known as brown adipose tissue, is a special kind of fat that burns energy to generate heat. It keeps small animals and babies warm, and animals with abundant brown fat are protected from diabetes and obesity. How brown fat is regulated in people, and how it relates to metabolism, have been unclear.

The study results, which clearly show the ‘plasticity’ of brown fat in humans, are published online today in the journal Diabetes to coincide with the ICE/ENDO meeting.

Lee’s previous studies have shown that people with plentiful brown fat stores tend to be lean and have low blood sugar levels. His studies have also shown – in the laboratory – that ordinary human white fat cells can change into brown fat cells.

For the ICEMAN study, 5 healthy men were recruited and exposed to four month-long periods of defined temperature – well within the range found in climate-controlled buildings – at the NIH Clinical Centre. They lived their normal lives during the day, and returned each night to the centre, staying for at least 10 hours in a temperature-regulated room.

For the first month, the NIH rooms were maintained at 24º C, a ‘thermo-neutral’ temperature at which the body does not have to work to produce or lose heat.

The temperature was then moved down to 19º C for the second month, back to 24º for the third month, and up to 27º for the fourth month.

At the end of each month, participants underwent a detailed ‘thermal metabolic evaluation’ in a whole room calorimeter. Measurements taken at the end of the first month represented ‘baseline’.

Independent of the season during which the study was carried out, brown fat increased during the cool month and fell during the warm month.

Among the metabolic benefits of increased brown fat was heightened insulin sensitivity. This suggests that people with more brown fat require less insulin after a meal to bring their blood sugar levels down.

“The big unknown until this study  was whether or not we could actually manipulate brown fat to grow and shrink in a human being,” said Dr Lee.

“What we found was that the cold month increased brown fat by around 30-40%.”

“During the second thermo-neutral month at 24 degrees, the brown fat dropped back, returning to baseline.”

“When we put the temperature up to 27 degrees during the fourth month, the volume of brown fat fell to below that of baseline.”

Dr Lee sees promise in brown fat for people with diabetes, whose bodies have to work hard to bring sugar levels down after a meal.

"The improvement in insulin sensitivity accompanying brown fat gain may open new avenues in the treatment of impaired glucose metabolism in the future. On the other hand, the reduction in mild cold exposure from widespread central heating in contemporary society may impair brown fat function and may be a hidden contributor to obesity and metabolic disorders," Lee said.

“Studies have been performed in the UK and US measuring bedroom, dining room and lounge room temperatures in people’s homes over the last few decades, and the temperature has climbed from about 19 to 22, a range sufficient to quieten down brown fat.”

“So in addition to unhealthy diet and physical inactivity, it is tempting to speculate that the subtle shift in temperature exposure could be a contributing factor to the rise in obesity.”

*The study was conducted at and supported by the Intramural Research Program of the National Institute of Diabetes and Digestive and Kidney Diseases at the NIH. The content of this news release is the sole responsibility of the authors and does not necessarily represent the official views of NIH.

Dr Lee’s role in the study was also supported by the Royal Australasian College of Physicians Foundation and the School of Medicine at The University of Queensland.