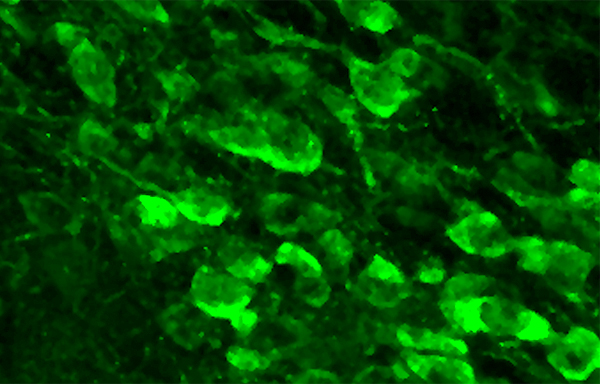 The Foundation seeks out the most promising research from around the world in its quest to find a cure for Parkinson’s disease, and its Target Validation Program funds studies toward new therapeutic targets.

The Garvan Institute Neurodegenerative Diseases laboratory, led by Dr Vissel, has received funding to determine how well a promising prototype drug protects a mouse model against the death of dopamine-producing cells in the brain, a key step before developing a drug for human use.

The motor symptoms of Parkinson’s disease develop when approximately 70% of dopamine cells are damaged. Dopamine is a neurotransmitter that is necessary for smooth, purposeful movement. Loss of dopamine causes the classic signs of Parkinson’s: tremors, rigidity, and trouble walking and moving. There are currently no treatments that slow disease progression.

The prototype drug being investigated by Vissel and Stayte offers promise of slowing Parkinson’s disease. The drug targets kainate receptors, signalling molecules that function within the glutamate system, an important excitatory, or “go,” system of the brain. By blocking kainate receptors, the prototype drug reduces the excitatory effect of glutamate, and so calms the central nervous system.

The researchers have already shown that their prototype drug has a potent neuroprotective effect in mouse models of Parkinson’s disease. They will now be investigating the mechanisms of the drug’s effect to understand better exactly how it works in the brain.

“Much research is being done worldwide on glutamate, as it has profound effects on a number of neurodegenerative diseases, including Parkinson’s disease,” said Dr Vissel.

“Until now, almost all treatments have focused on replacing dopamine once it has gone. We believe we have a very attractive target for drug development that may prevent dopamine cell death.”

Researchers at Sydney's Garvan Institute are developing a drug that could slow down the death of the brain cells that cause Parkinson's symptoms.